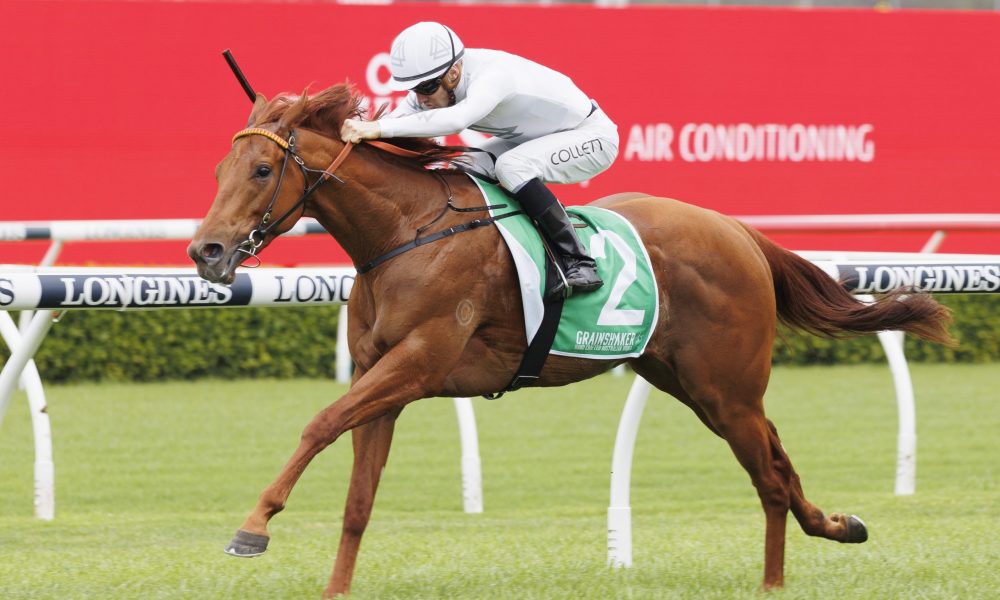 Some generational depth of both the human and equine variety has come to the fore in Kote, the headstrong son of Choisir, who’s emerging as a sprinter to watch for his trainer – and breeder – Anthony Cummings.

As a teenager in the late 1960s and early ‘70s, Cummings would travel to stud farms in New Zealand ahead of yearling sales there with his father Bart, a reasonably famous name in racing, and very famous as an Australian pioneer in prospecting for thoroughbred talent across the Tasman.

And that unspoken knowledge of bloodlines familiar through a racing dynasty has proved useful in the making of Kote, winner of last Saturday’s Brian Crowley Stakes (Listed, 1200m) at Randwick.

For if there’s one stand-out name in the three-year-old’s pedigree, it’s his fourth dam, the New Zealand mare Soliloquy. A daughter of the outstanding Group 1 winner and sire Sobig, from a producer of three stakes-winners in Princess Patine (Pakistan II), Soliloquy was a 1971 drop who won three black–type races, capped by the Lion Brown Sprint Gr 1, 1400m) of 1977, beating the superb Balmerino (Machiavellian) into second.

She was just as effective at stud, throwing no fewer than four stakes-winners, among nine winners from 11 runners. Her third foal was Listed-winning mare Quibble (Ruling). But with her next one she hit the jackpot in Solveig (Imposing), winner of three New Zealand Group 1s among nine black type wins, and later the dam of two Australian stakes-winners by Grosvenor (Sir Tristram) in Greig, winner of Randwick’s Stan Fox Stakes (Gr 2, 1600m), and Lady Solvil.

Soliloquy’s seventh named foal was the colt Reasoning, who had shades of Greig and Lady Solvil in being by Grosvenor, and who Bart Cummings trained to win in Listed class over 2400m in Sydney in 1990. Soliloquy’s stakes-winning quartet was rounded out by New Zealand G2-winning mare Soltanto.

“Soliloquy as a base female is very, very good,” Cummings tells It’s In The Blood. “That’s a great New Zealand family, and I grew up with some of that stuff, so it was a fairly comfortable place to land in looking at pedigrees.

“Dad had some relations from the line, and going way back there were members of that family that stood up. Our family’s had a long association with that part of New Zealand pedigrees, going back to the 1970s when I used to go over there with the old man.

“We trained Reasoning here and we had a couple of sons of Quibble.”

One of Quibble’s progeny – not trained from Leilani Lodge – was Cross Swords, another son of Grosvenor who won the 1994 Sydney Cup (Gr 1, 3200m). Anthony Cummings trained his younger full sister, Cross Words, a provincial winner who went to stud and threw one filly before being fatally struck by lightning.

That filly, however, was a name critical to Cummings’ breeding exploits, Cryptic Miss (Snippets).

“I thought Cross Words had ability, so I was more than happy to buy her first foal,” says Cummings, who was finally able to tease a win out of Cryptic Miss at her 15th start, a 2100-metre maiden at Gosford. “She was six lengths clear into the straight, but bowed a tendon at the furlong. She still won, but was buggered.”

Retired in 2007, Cummings sent her twice to the dual Group 1 winner he’d trained (and had a syndicate role in breeding) in Hotel Grand (Grand Lodge). The second of those matings produced the highlight of Cummings’ breeding CV, Fiveandahalfstar, who he trained to win the 2012 VRC Derby (Gr 1, 2500m) and the next year’s BMW Stakes (Gr 1, 2400m), as an autumn three-year-old.

And so, to take stock, Soliloquy threw Quibble, who started a line of three Cummings-trained horses: Cross Words, Cryptic Miss and Fiveandahalfstar.

So, it was no surprise when Cummings a few years ago acquired the unraced mare Soffraaj (Iffraaj), who was out of Soelin (Stravinsky), out of Solano (Red Glow), out of Soliloquy.

Solano and Soelin were nothing flash on the track, though Soelin won thrice and produced two winners from two runners. Soffraaj’s racetrack potential was never revealed, but she’s been a most useful broodmare for Cummings.

“She never raced. She got tangled in a rug when she was being changed at a spelling farm, went down and suffered a fracture in her knee,” he says. “I wanted to have something from the family I could have a play with, breeding-wise, and she became it.”

Cummings bred, as her second foal, the gelding he now trains in Caesar’s Palace – by another of his former Group 1 winners Casino Prince (Flying Spur). The five-year-old is a city-winner of six races and $350,000 who last start claimed the Coonamble Cup (1600m) at Dubbo to qualify for next Tuesday’s $2 million Big Dance (Gr 1, 1600m) at Randwick.

And Soffraaj’s third foal is Kote. He may have only just won in Listed class, but he’s emerging as a sprinter with quite the future, having now gone for a spell after three city wins from his past four starts. Cummings, in fact, is adamant he should’ve had five wins in a row, and while the two blemishes were eighth placings, the horror show replays of those luckless runs do support the assertion.

“He’ll come back in the autumn and we’re looking at the Lightning [Stakes] and Newmarket [Handicap] at Flemington,” Cummings says. “The longer-term plan is to give him a profile attractive for an Everest slot holder. In most of his races, he’s run significantly faster than other races over that trip on the day. Hopefully, he’ll be nice and pliable and sensible when he comes back.”

That wasn’t always the case, leading to his gelding after managing no better than fifth from his first four starts. The last of those was the Fernhill Mile (Listed, 1600m) at Randwick in April, when he led fiercely and came 28 lengths last. Since his snip, he’s produced his aforementioned run of three wins in five, but still he’s a horse with, shall we say, a distinctive personality.

Cummings had sent Soffraaj to Choisir partly to “put some size into her”. Her first cover by Casino Prince had produced an underwhelming filly Bell Bird who was “a typical first foal, on the little side”, before the “medium–sized” Caesar’s Palace.

“Kote always presented as a good athlete, and he’s typical of the family in that he’s pretty headstrong,” he says of the sprinter he now races with stable clients. “He’s was strong from the get-go, and certainly strong-willed.

“He was too strong in his races. He’d either go forward flat-chat, or if you went back he’d switch off altogether. Gelding him has found that middle ground, but still, he’s an annoying bugger.

“He likes to win every argument. You’ve got to work around that. Once you stop fighting with him, he just stops. He just enjoys the bluff and bluster. Getting saddled, going into the enclosure, on the way to the gates – if he can find a way to annoy you, he will. But then he’ll switch on for the race, and in that department he is showing us a fair amount of potential.”

Putting an Iffraaj mare in Soffraaj to Choisir, a son of Danehill Dancer, enacts Iffraaj’s most powerful nick, with Danehill, which has produced stakes-winners of the ilk of Melody Belle (Commands), and Turn me Loose on the reverse.

“The Danehill thing works for most members of Soffraaj’s family,” Cummings says. “And Stravinsky mares (Soffraaj’s dam Soelin) speak for themselves.”

Also keen on six appearances of blue hen Natalma through Kote’s sixth to eighth generations, Cummings now has the gelding’s three younger half-brothers: Missile Defence, a yet-to-race two-year-old colt by Smart Missile, and a yearling and a new foal by Magna Grecia.