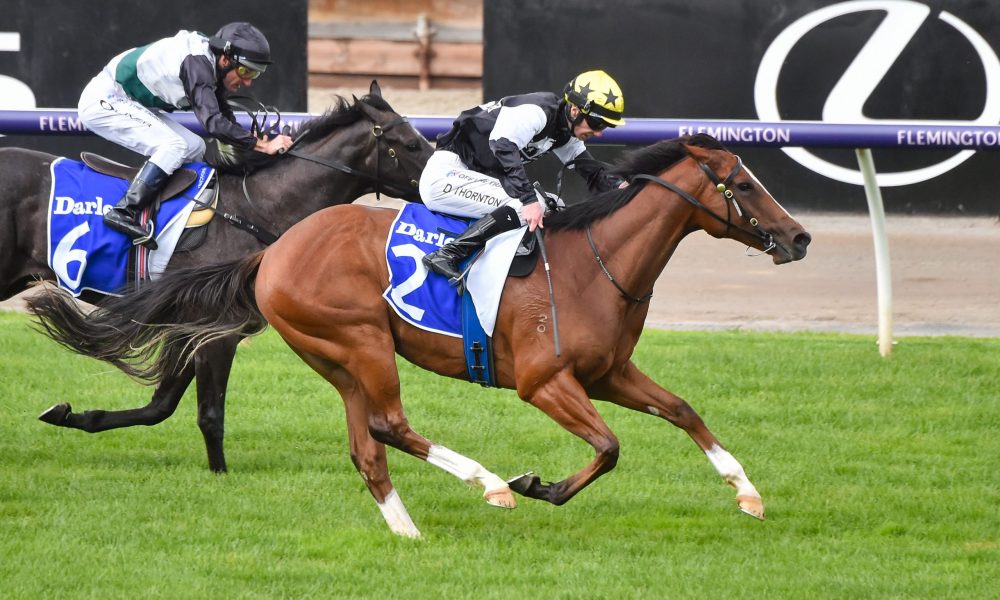 Having ran to be unplaced behind Zulfiqar (Exceed And Excel) on debut in the Maribyrnong Trial Stakes (Listed, 1000m), Krakarib (Ribchester) decisively turned the tables on that rival when winning the Maribyrnong Plate (Gr 3, 1000m) on Melbourne Cup Day at Flemington.

Sent off a relatively unfancied 25-1 chance for the Group 3 contest, the son of Haunui Farm shuttler Ribchester (Iffraaj) made all under jockey Damien Thornton to score by three-quarters of a length over Little Brose (Per Incanto), with Awestruck (Hellbent) the same distance further behind in third.

“We had a good plan. Just to let him roll. The other day he [Damian Lane] held him up, and he over-raced and wasn’t breathing right,” winning trainer Simon Zahra said.

“He [Thornton] kept him nice and fresh and well, and we said to Damien not to overcomplicate it. Just go to the front and let him breathe and use his natural speed.

“We thought he could win first-up. He got buried on the fence, and he just did everything wrong. I said to Damien, just let him roll into a good rhythm.

“He’s got really good natural speed, let’s use that. He’s pretty well educated. He’s been in work a long time and been through the system three times. I was pretty confident coming into today that he’d run a super race.”

Bred by Spendthrift Australia, Krakarib was purchased by Zahra for $30,000 out of the paddock at Spendthrift Farm.

“We bought him off the farm for about $30,000 from Spendthrift, out of the paddock 12 months ago, and said to the ownership that this is our first two-year-old together,” Zahra said.

“I had [thought about] getting him gelded so he’ll have a break, he’s been in work a long time and give him a bit of a freshen up, have a crack. He’s small and open to improvement.

“He’s got good natural speed and he’s paid his way for everyone.”

He is the first foal out of the winning Dawn Approach (New Approach) mare Skagerrak, who was bought by Spendthrift out of Godolphin for $250,000 at the 2020 Magic Millions Gold Coast National Broodmare Sale.

Skagerrak was then re-sold to B2B Thoroughbreds for $400,000 at this year’s Magic Millions National Broodmare Sale while in foal to Dirty Work (Written Tycoon).

Ribchester, who stood the 2022 northern hemisphere breeding season at Kildangan Stud, stands at Haunui for a fee of NZ$15,000 (plus GST).