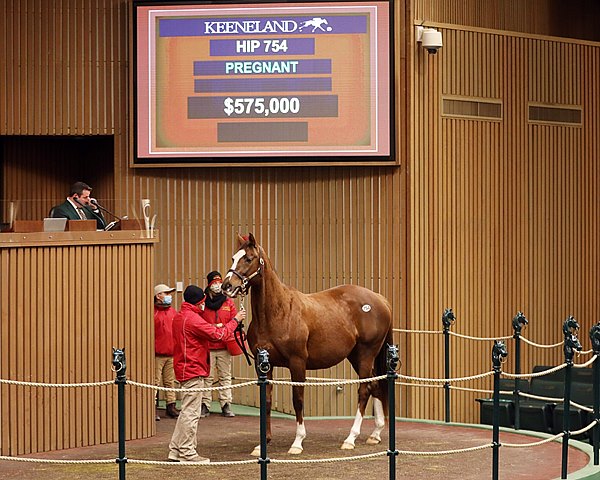 The second session of Book 1 at the Keeneland January Horses of All Ages Sale was certainly one for the books on Tuesday. Bolstered by the addition of several farm dispersals, the atmosphere on the grounds was one of frenzied activity as horses changed hands for strong prices throughout the day.

The belle of Tuesday’s ball was most certainly Sam-Son Farm, which sold 21 mares through their dispersal for receipts of USD$6.73 million (approx. AUD$8.69 million). That number would make the historic Ontario farm the leading consignor on the day. But while its success in the ring was certainly a testament to the sheer quality of the farm’s breeding stock, the auction was still an emotional moment for the staff, as they slowly learned to say goodbye to nearly half a century of top-level breeding and racing.

“The business of the game and just trying to get everything ready, we’ve worked so hard to do this we haven’t really given ourselves time to absorb it all,” said Sam-Son Farm manager David Whitford. “There’s a lot of pressure to do things right, especially for the family. They’ve been in the game for 50 years and we don’t want to mess that up.

“There’s a great legacy there, and we felt the pressure of doing that. I wasn’t there when the mares loaded up on the farm to come down here. My staff back at the farm…it might be hitting me right now. It’ll be bittersweet for sure.”

From buyers, to consignors, to general onlookers, the praise for Sam-Son Farm and its legacy continued throughout Tuesday’s session.

“They’ve spent a life’s work building these families and I’m sure it’s mixed emotions for a lot of the guys working there,” said Elliott Walden of WinStar Farm after signing the ticket on Lot 588, a USD$310,000 (approx. AUD$400,000) Tiznow (Cee’s Tizzy) mare named Dancing Fancy out of Canadian champion Dancethruthedawn (Mr Prospector).

“Dave Whitford, I talked to him yesterday, it’s like seeing his kids go. He takes some solace in the fact that they’re going to good homes and he can still cheer them on and the whole team can. They’ve done a great job over a number of years and they have a lot of nice mares.”

“Bidding as an opportunist to get in those pedigrees, but also a tribute to (Sam-Son founder) Ernie Samuel and all the people that put Canadian racing on the map. I’m a Canadian and proud that I grew up in the era of (E P Taylor’s farm) Windfield.

“Sam-Son Farm is as good and successful as anybody in the world doing what they did. For me it’s really sort of a claim of heritage and a chance to get involved in things that I think could really be important in the future, and breed to horses that we stand and have access to, and hope to revive those pedigrees, and be significant either on the track or in the sales ring.”

The highest price for any Sam-Son mare on Tuesday came in the form of Lot 587, Danceforthecause, a ten-year-old daughter of Giant’s Causeway (Storm Cat) and already a proven producer. Offered in foal to Lane’s End’s Twirling Candy (Candy Ride), the bay is a daughter of Dancethruthestorm (Thunder Gulch) and a sister to stakes winner Grand Style.

Danceforthecause’s second dam is Sam-Son Farm’s illustrious mare Dance Smartly (Danzig), winner of the 1991 Canadian Triple Crown who was named champion two-year-old, three-year-old and Horse of the Year in Canada, as well as champion three-year-old in the United States. The late Dance Smartly was also a half-sister to Grade 1 winner Smart Strike (Mr Prospector), who twice earned the leading sire title in the US during his 18-year tenure as a Lane’s End stallion.

“I thought she was a really beautiful mare,” said bloodstock agent Alex Solis, who signed the ticket for Danceforthecause on behalf of Gainesway Farm. “She has great balance and obviously she’s been a great producer already. I think this is the best Sam-Son family there is and with Dance Smartly as the second dam and Smart Strike is right there on the page, I thought she was a very exciting prospect. The price, I thought, was fair. The mare is ten years old, so I thought it was very fair. The right horse always brings a lot of money.”

Consigned as Lot 754, the daughter of Giant’s Causeway is out of the Miswaki (Mr Prospector) mare Misty Mission, a half-sister to Canadian champion Comet Shine (Fappiano). Mythical Mission is also a sister to two-time Canadian champion Irish Mission and a half-sister to stakes winner French Beret (Broad Brush). Mythical Mission was offered in foal to Triple Crown winner American Pharoah (Pioneerof The Nile).

“We bid on ($925,000) Regal Glory (Lot 403),” said Araki. “We liked her but couldn’t get her. This was the second mare for us today. Of course, American Pharoah is good in Japan. We bought the mare because of her family and her physical. I wish Mr Shimokobe could come into town but, of course, a lot of Japanese buyers couldn’t come.

“The mare will stay here in the US. Shipping is not until next month but she’ll have the baby by then. Then she’ll be bred to something else and ship back to Japan. But she will foal here.”

Sharing the top price for the day was Lot 403, Regal Glory (Animal Kingdom), who was consigned by Lane’s End, agent for the complete dispersal of the estate of Paul Pompa Jr. Out of the More Than Ready (Southern Halo) mare Mary’s Follies, three-time Graded stakes winner Regal Glory was purchased by Peter Brant’s White Birch Farm and will return to training with Chad Brown.

“The power of the dispersals was obvious today with nine of the ten top prices going to the dispersals,” said Keeneland’s director of sales operations Geoffrey Russell. “It was bittersweet but we appreciate the trust they put in us to put this on today.

“The opportunity – especially with the Sam-Son dispersal – to get into these mares has been limited over the years. The same is true with the mares of Mr Pompa. They come from strong female families and as Shannon (Arvin, Keeneland president and CEO) said, breeders are looking for ‘blue skies’ ahead and they have to have the product to produce yearlings to sell.”

Bred in Kentucky by Baumann Stables, Aaron Sones, and Eric Crawford, the filly is out of the Bernardini (A P Indy) mare I’ll Show Me, a half-sister to champion and 2008 Kentucky Oaks (Gr 1, 9f) winner Proud Spell (Proud Citizen).

By Meredith Daugherty and Christine Oser of Bloodhorse
Features