Lauriston revel in $1.1 million colt raised as a twin 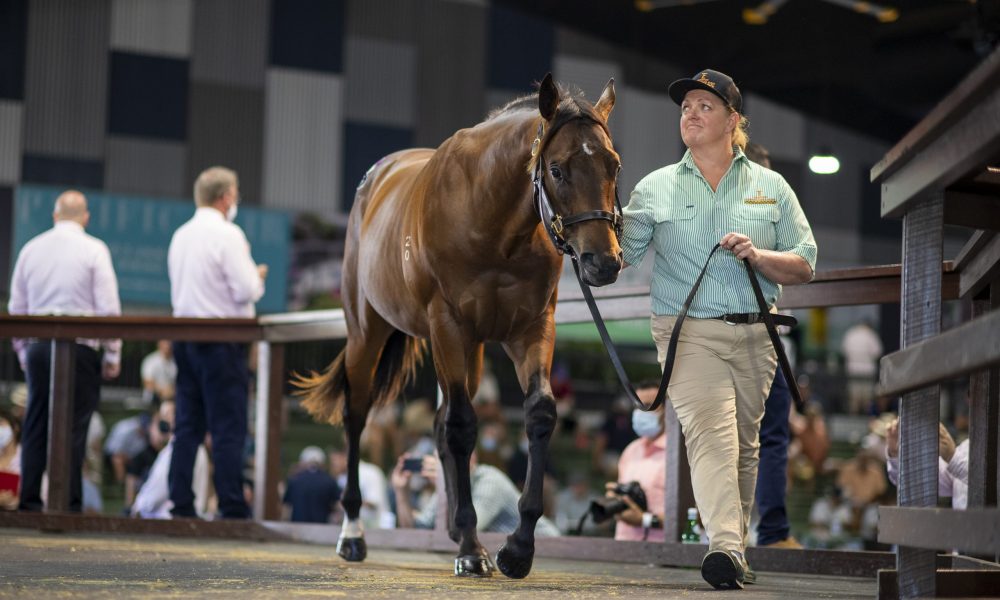 Lauriston Thoroughbred Farm was due for the turn of a friendly card.

In May, 2020, principal James O’Brien lost his father Kevin, the breeding heavyweight who’d built a business in caravan parts, including supplying the Jayco line of the man who nudged him towards horses, Gerry Ryan.

Covid hit, the future was unclear, and for the first time Lauriston switched from yearlings and to weanlings.

“My dad passed, and Covid was coming, so I made a decision to consolidate,” O’Brien tells ANZ Bloodstock News.

Lauriston went to the Inglis Australian Weanling Sale and sold the top lot – $280,000 for a filly by Not A Single Doubt (Redoute’s Choice) out of eight-time winner Rhodamine (Success Express) – and finished second on averages, and it seemed the right rein had been pulled.

But, as has been found again this week, it came into focus that racing and breeding appeared somehow immune to the coronavirus. While the ten weanlings Lauriston sold grossed $699,000, seven went on to yearling sales and yielded $1.6 million, with Rhodamine’s filly reaping more than that entire weanling draft, at $750,000.

O’Brien decided to return to yearlings. It was probably for the best in the long term, but it would mean a year without that major sale income stream, aside from Lauriston’s other line as a pre-training and spelling location.

He’d also decided, in the spring of 2019, to send Rhodamine to The Autumn Sun (Redoute’s Choice), standing his first season at Arrowfield for $77,000. But, once floated north to the Hunter, Rhodamine couldn’t be fitted in. Not wanting to miss a cycle, O’Brien took up Arrowfield’s suggestion of a return to Not A Single Doubt, even if there probably was indeed at least half a single doubt, since his service fee had hit a career-high $110,000.

Just short of a year on, there was a buzz, and much activity, at Lauriston. Rhodamine, one August night, went into labour. So, too, did her paddock mate, former outstanding grey sprinter Gold Edition (Lion Hunter).

“It’ll often happen that way, especially with paddock mates,” O’Brien says. “When one goes they all seem to go. And it’s always at night. It’s a defence mechanism. They’re creatures of flight. If, say, it’s raining or storming, they’ll both foal.”

Rhodamine delivered a colt, but more poor fortune was to come. In the process, it seems the colt had kicked out, causing serious damage and blood loss. The 15-year-old Rhodamine couldn’t be saved.

Amid this chaos in the dark, with Gold Edition’s colt, by Lonhro, now also on the ground, the thinking had to be quick.

“We took the placenta from Goldie’s foal and put it on Rhodamine’s colt, rubbed it all over him, so when he came to Goldie, she smelled him and she thought she had twins,” O’Brien said.

And so the 18-year-old Gold Edition raised both colts. She’d carried Lauriston’s colours to 17 wins, two Group 1s, topped the Australasian three-year-old sprint classification, but hadn’t done much to write home about as a mum. But in this task she would excel, while also helped by tubs of formula ever-ready for the hungry, growing colts.

“It depends on the nature of the mare whether they’d take foals that aren’t theirs,” O’Brien says. “But Goldie just went ‘Yep, we’re on’. She took to it. The placenta trick would’ve helped, but she’s just a lovely mare, been very unlucky at stud; lost a couple, and then there were injuries. But she’s a superstar and I’m convinced she’ll have a good one one day.”

That filly who topped the weanling sale, Pantonario, has placed third in the Gimcrack Stakes (Gr 3, 1000m).

It transpires that from that 2019 season, Not A Single Doubt – enshrined as one of the outstanding sires of the modern era – left only 37 live foals from 94 covers. The stats reflected a health decline which forced his retirement from stud in 2020 due to pulmonary disease.

Only 14 of those foals make it to this week’s Magic Millions Gold Coast Yearling Sale. Only five of them are colts, and one is that full brother to Pantonario. He walked into the ring yesterday and, after all these setbacks and regrets, after being raised through meticulous human care and by a racetrack star who could well have rejected him, he walked out of it as a $1.1 million horse.

It was, understandably, an emotional day. In recounting the saga and its conclusion, O’Brien pauses to catch a breath.

“Dad didn’t see these horses foaling, and being reared,” he says. “Would’ve been great if he did.”

The sale – capping a giddy period in which Incentivise (Shamus Award) and Verry Elleegant (Zed) graced Lauriston’s fields amid their golden spring campaigns – was hailed by O’Brien as a “great result for us”.

“Coming in, I wasn’t sure how the market would be,” he said. “But with only five Not A Single Doubt colts here, and with one of them selling for $1.7 million yesterday and a couple of his fillies selling well, I upped my expectations.

“So we did luck in, in going to Not A Single Doubt. And right now, I’m still consolidating the business a little bit, I’m not trying to expand, and so results like today really help with that.”

As Team Lauriston packed up to leave, the farm sat third among the leading vendors by average, with its three lots at $490,000.

Even if it was for one night only, it was a blockbuster.