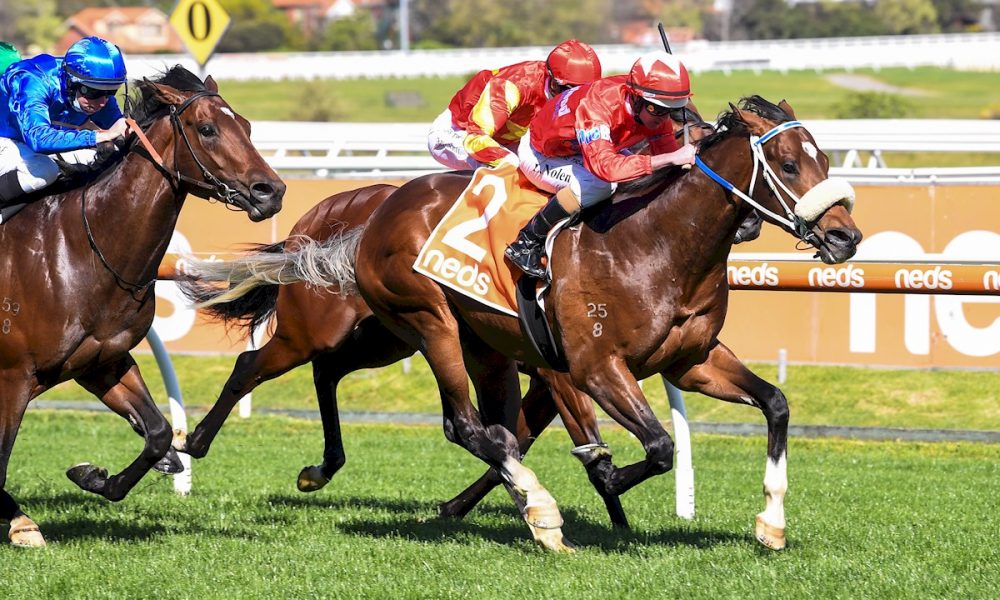 As the name would suggest, Lightsaber is a flashy thoroughbred who stands out – in more ways than one.

For a start there’s the tail – the eyecatching streak of silver trailing the bay, who underlined his Caulfield Guineas credentials and further pushed those of his sire Zoustar with his second stakes win from eight starts in last Saturday’s Group 3 Prelude.

But also the Peter Moody-trained colt sticks out amidst his family, at last providing star quality from a female line from which a little more might have been expected, a lift in fortunes for which his sire Zoustar can take credit.

The highlight of the bloodline comes four generations back in the mare Piccadilly Circus. She was by the great Royal Academy (USA) out of Gatana, who won two Listed races and was second in the 1994 Newmarket Handicap (Gr 1, 1200m) at Flemington behind Mookta.

Piccadilly Circus inherited that speed, winning two black-type races and placing third in Danelagh’s Blue Diamond Stakes of 1998, but it was at stud where she kicked her biggest goal.

As you would at the time, her owners sent her to Danehill for her first four matings. The first produced a filly called Cirque Du Soleil. The third yielded a colt, named Fastnet Rock.

Where do you start, and where do you finish, with the great sprinter and uber-sire? He of course needs no introduction here, but two Group 1 wins as a racehorse in 2005 followed by 179 stakes winners worldwide as a sire – so far – is a start.

(For her fifth foal, Piccadilly Circus also met with success, albeit on a less-beaten track than Fastnet Rock’s. Put to Giant’s Causeway, she threw Juggling Act, a stallion who came last twice at Mornington but then went to the Philippines, where he was named champion imported horse of 2011.)

Cirque Du Soleil, meanwhile, was handy, though not quite up to the class of her younger brother. She won one of 11 races for Lee Freedman and was placed twice in Listed class in Melbourne.

Considering the scattering of star relatives, however, until Lightsaber there hasn’t quite been a host of standouts from this female line.

For the first of Cirque Du Soleil’s offspring, her owners had gone again for Giant’s Causeway. The mating produced Magestique, whose career was limited to two starts, including a third at Newcastle. However, the Fastnet Rock element ensured that when owners Coolmore offered her at the Inglis Australian Broodmare Sale in 2009 – in foal to Haradasun – she fetched a hefty $200,000, bought by Nasser Lootah’s Emirates Park.

The Haradasun offspring was Hoffenhorry, a gelding last seen in country Queensland. A subsequent cover by Medaglia D’Oro produced Distant Rock, who won in Melbourne and ran a Listed second in Adelaide, before a return to the same stallion yielded Malaahy, a filly unplaced in two starts.

But next up Magestique was sent to Emirates Park’s half-owned shuttle stallion Dream Ahead, which resulted in Dream Cirque. She was limited to just two barrier trials for Waterhouse, but so far has produced three named foals with the only one to race – Lightsaber – giving her a 100 per cent strike-rate for stakes winners.

The Zoustar colt’s success to date – four wins from eight starts – comes against some humble beginnings.

“Lightsaber was a lovely horse but he didn’t make great money,” says Emirates Park general manager Bryan Carlson. “He was a nice, neat horse but didn’t have the best x-rays; nothing major, just a few minor things. Plus, the family hadn’t really done much for a while.”

The colt went for $80,000 at last year’s Inglis Classic sale, then for $100,000 when put through again at the Inglis Ready to Race sale later in the year.

In contemplating what’s provided the oomph behind Lightsaber, we’re led again to another behemoth of Australian breeding, this time wearing his damsire hat, in Redoute’s Choice.

Lightsaber boasts a 4×4 cross to Danehill, of the keenly-sought gender-balanced variety, through a son in Redoute’s Choice – sire of Zoustar’s mother Zouzou – and through the previously mentioned fourth-dam, Cirque De Soleil.

But Carlson believes it’s the blend of Dream Ahead and Redoute’s Choice that most likely brought Lightsaber’s ability.

Dream Ahead was a five-time Group 1-winning sprinter, was rated level with Frankel when the two were named the equal best two-year-olds in Europe in 2010, and was Europe’s champion sprinter the following year.

The son of Diktat shuttled to Emirates Park for seven seasons, but the last of those was in 2018. His Australasian highlights have included Marboosha, a dual stakes winner and contender in this Saturday’s Golden Pendant (Gr 2, 1400m) at Rosehill, dual Group 2 winner Shumookh, handy Group 1-placed New Zealand galloper Sensei, and half-million dollar earner (and Listed winner) Ken’s Dream.

Ironically, since he now stands solely in France, Dream Ahead has been enjoying a strong run in the antipodes, where his youngest progeny are three-year-olds. With his six-year-old son Phobetor winning the Missile Stakes (Gr 2, 1200m) at Randwick last month (when another son Matowatakpe won at the same meeting), Dream Ahead is currently on a career-best mark of 28th on the Australian general sires list.

While it may have taken time to divine the best mixes for a relatively rare-in-Australia Diktat stallion, the fusion of Dream Ahead with Redoute’s Choice has been a potent one. Dream Ahead over Redoute’s Choice mares has produced eight winners from ten runners, four of them stakes winners – making it Dream Ahead’s best nick. The offspring include Eagle Farm Group 3 winner Dreams Aplenty and Magical Dream, another burgeoning Bob Peters-owned mare from the west who’s won five of eight in Perth.

Put the other way, with a son of a Redoute’s Choice mare in Zoustar covering a daughter of Dream Ahead in Dream Cirque, the blending of the bloodlines appears to have done the trick again in Lightsaber. It could be said that he’s inherited more from Dream Ahead than the flashy silver tail.

“Dream Cirque mated up well with Zoustar,” Carlson says. “Redoute’s Choice with Dream Ahead has worked very well, and with Zoustar it was just speed on speed, which is what we try to do most of the time.

“The Diktat line hadn’t had much out here before Dream Ahead, so we had to work out what really worked here in Australia. But Zoustar’s done alright with him.”

Zoustar, meanwhile, continues to go from strength to strength. Having been Australia’s champion first and second season sire through the deeds of his all-time star Sunlight, Widden’s flagbearer finished seventh on the Australian general sires list last season, his best being Newmarket winner Zoutori. He’s currently seventh again this season, thanks not only to Lightsaber but also Melbourne speedster Zouzarella, Listed winner of two from two for Anthony and Sam Freedman.

Emirates Park, which owns around 75 mares between Australia and Europe, is currently on the lookout for another stallion to stand. After some recently revealed trends, a return of the 13-year-old Dream Ahead might not be out of the question, particularly if Lightsaber can lift a Group 1 in the Caulfield Guineas next month.