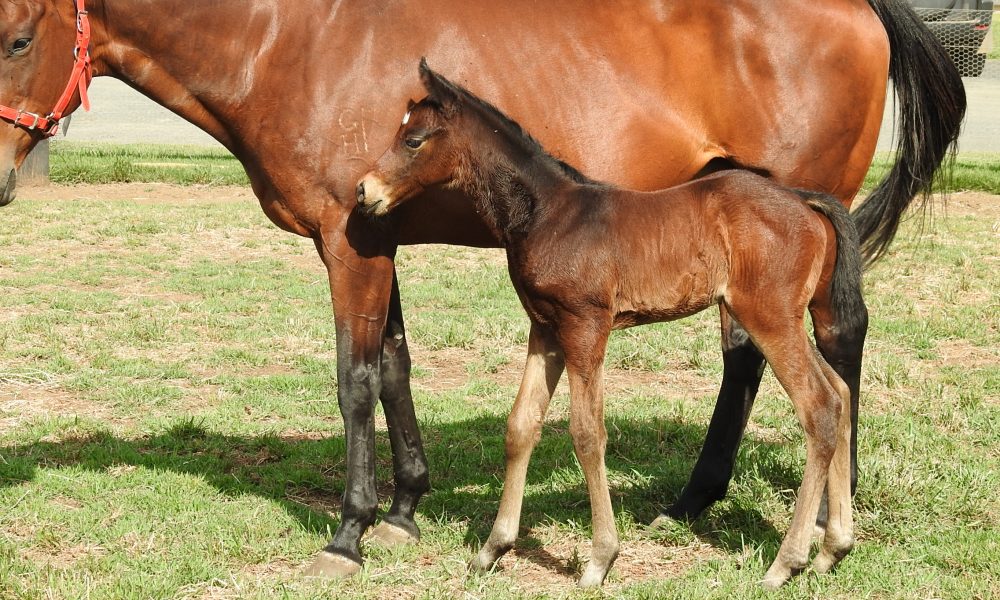 O’Shea trained the Gooree Park homebred as an early two-year-old with some promise, but was forced to give him up before he’d raced in early 2014 when O’Shea became Godolphin’s Australian trainer.

Bart and James Cummings were the immediate beneficiaries, training the son of Street Sense (Street Cry) in a brief but stellar career in which he won six races – including the Golden Rose (Gr 1, 1400m) and Randwick Guineas (Gr 1, 1600m) – from just nine starts.

In a series of intertwined threads, Hallowed Crown ended up joining O’Shea under the Godolphin/Darley umbrella when he began his stud career, including shuttling to Great Britain and Ireland for two seasons. James Cummings then joined Hallowed Crown in the Sheikh Mohammed empire as O’Shea resumed public training in 2017.

Hallowed Crown switched base early last year – leaving Darley after five seasons as Gooree bought them out of the stallion and moved him to Twin Hills Stud. And finally, O’Shea is now excited about the stallion’s four-year-old daughter he trains, the orphaned homebred who was bred by Twin Palms Stud, Lillemor.

It was the narrowest of margins in a deceptive, head-bobbing finish, but Lillemor improved her already considerable value by leaps and bounds at her first attempt at black type, taking out the Gai Waterhouse Classic (Listed, 1200m) at Ipswich last Saturday.

It was Lillemor’s seventh win from 17 starts for O’Shea, her third from her last four, all at city level (plus a narrow Rosehill second). Doubtless it brought her trainer added satisfaction through the fact she nosed out Intrepidacious (Shooting To Win), who O’Shea trained for five wins before her sale last month and transfer to Lee Freedman.

But O’Shea sounds almost as excited to see some results for Hallowed Crown, who’ll stand his second season at Twin Hills for $11,000.

His name is perhaps not the first thing that catches most eyes about Lillemor’s pedigree. It’s the dam – 2003 Golden Slipper (Gr 1, 1200m) winner Polar Success (Success Express). Twin Palms’ mare bore Lillemor as an almost-December drop at Vinery Stud late in 2016. But sadly she died, aged 16, of complications from colic three months later. The diminutive Lillemor was thus raised, by bottle and bucket, by Vinery’s staff until leaving as a late-blooming two-year-old.

Lillemor has now leapt to second, by her $350,000-plus prize–money, among Hallowed Crown’s offspring. That could sound less than flattering for a stallion with a few hundred foals on the ground, but in this case, O’Shea calls it a high recommendation. As he does, of course, when considering the No 1 galloper on Hallowed Crown’s list – by some margin – in the $5 million-earning Godolphin mare Colette, winner of the ATC Oaks (Gr 1, 2400m) and a Golden Eagle (1500m).

O’Shea’s point is that the Slipper-winner Polar Success, by the Breeders Cup-winner Success Express (Hold Your Peace), was matched with a host of leading sires before Hallowed Crown, in his first crop, helped produce her tenth, last, but probably best offspring.

“I think Hallowed Crown is extremely under-rated myself,” O’Shea told It’s In The Blood. “He didn’t get great support in his first few seasons, and I’d reckon a horse with his pedigree would’ve been better suited standing in New Zealand, but in any case, he doesn’t have a lot on the ground, but I think he’s shown now how he’s under-rated.

“He’s had a Group 1 winner out of his first crop. Libretto had a lot of goes at Godolphin and couldn’t throw a decent horse, and now she’s got a serious weight-for-age Group 1 winner late in her career by going to him.

“I trained a bunch of things out of Libretto and they were legless.”

There was gelding Elusive Song, a provincial winner by Elusive Quality (Gone West), and his full–sister Librettista, who was exported to England and won twice there. Prose, by Commands (Danehill), was placed twice at the Gold Coast. Libretto then went to Winx’s sire Street Cry (Machiavellian) and had Metastasio – her best before Colette with a Listed win at Caulfield and a Group 3 second – then her full–brother, the O’Shea-trained Transcript, who won three from 39.

Libretto was next put to Exceed And Excel (Danehill) and produced Requiem, who was unraced. Another cover by Street Cry yielded Delius, who O’Shea also trained, if for only two barrier trials. Now six, the gelding has won four in the bush from 46, and was last seen tailed-off at Thangool, Queensland, two weeks back – quite the quantum leap from his subsequent half-sister, Colette.

Polar Success might have had some early big-sellers at the yearling sales, but ultimately went through more misses than hits with her nine named foals before Lillemor. Giant’s Causeway (Storm Cat) sired her first, Polaway, who O’Shea trained for two city wins and a Listed placing from 11 starts. Other sires to cover her included Redoute’s Choice (Danehill), to produce Fiction, a Canterbury winner from 11 starts, Zabeel (Sir Tristram) the sire of Snow Blitz, unraced but at least the dam of the New Zealand stakes-placed Tears Of Jupiter (Zoustar), and US stallion Bernardini (A P Indy), for two-time low level winner Kim Success.

Two covers by More Than Ready (Southern Halo) produced Polarmore, an O’Shea-trained city winner in a five-start career, and Lockroy, the dam’s pin-up before Lillemor, with six stakes placings and more than $500,000 prize–money.

Polar Success also went to Lonhro (Octagonal), for Polar Star, five bush wins from 34 starts to date), Sepoy (Elusive Quality) for Lightz, three provincial wins from 21 starts, and All Too Hard (Casino Prince), to produce It’s Too Hard, who raced once and failed.

“Polar Success had been to just about every decent stallion in the country, and thrown nothing much, and Hallowed Crown has got a stakes-winner out of her tenth foal,” O’Shea says. “Another reason I think he’s under-rated.”

Aside from Colette and Lillemor, Hallowed Crown has also sired Big Hearted – out of the Redoute’s Choice mare Secret Selection – who won last year’s Singapore Gold Cup (Listed, 2000m). He’s also well represented in Hong Kong by the miler Gallant Crown, out of the Stravinsky (Nureyev) mare Justagem (NZ), who won his fourth from 13 earlier this month.

With Colette, Lillemor, Big Hearted and Gallant Crown all hitting their highs since Hallowed Crown moved home, little wonder Twin Hills’ Olly Tait feels the timing of it all has worked out quite well for the stallion who covered 66 mares last spring, with a similar number likely this year.

“Hallowed Crown has shown he can get horses that can compete at the highest level, and to now have another stakes-winner from his first crop in Lillemor is a big feather in his cap,” Tait says.

“She’s been very progressive and very well trained. John’s given her a lot of time, which she no doubt needed after being a late foal, but she’s a very competent racemare, and now being a Listed winner out of a Gold Slipper winner she’s a super valuable broodmare prospect.

“Hallowed Crown’s progeny do seem to take a bit of time and are best suited by a little bit of distance as well. I know Lillemor is a sprinter, and let’s remember she’s out of a Golden Slipper winner, but when I’m advising out clients I’ll tell them that if they’re aiming to breed a horse who operates at a mile plus, he’s a great option.”

As for Lillemor, O’Shea has his eyes on some more pedigree-enrichment this spring.

“I’ve got a Group 3 mares’ race in Sydney in late August,” he says.

“Getting the black type is great for her, but she’s still got plenty of racing upside. She hasn’t been overly taxed.