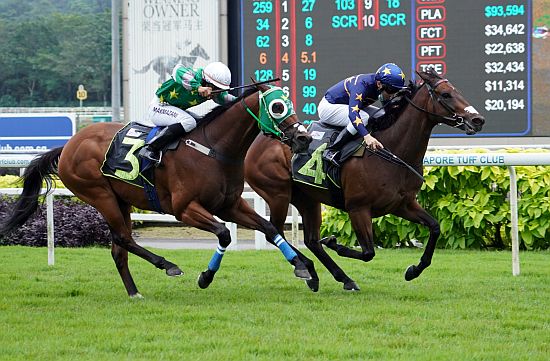 From unwanted as a youngster to favourite in Singapore’s blue riband classic, Lim’s Kosciuszko justified market support to score by a head over Stewards’ Cup (Listed, 1600m) victor Relentless (Hallowed Crown) with improving Kiwi import Super Impact (Real Impact) in third, a half-length from the winner.

It was a remarkable first Derby win for the much-travelled and notable big race rider, who returned to the saddle in 2021 having retired in 2017 to become assistant to Meagher.

“Derbies have been a jinx for me,” Beasley told the Singapore Turf Club. “I ran second in a couple of Australian Derbies, second in a (Queensland) Derby and second up here one day on Deep Pockets for Cliff Brown who I thought was a certainty yet he got his backside kicked by Chase Me.

“So it really means a lot to win one, especially with the circumstances of retiring, having four years off and this year we’ve – the stable – have been up and down but this little horse was always our Derby horse and we just had to get him here.”

It came five years after his retirement on Singapore Derby day in 2017, when he signed off having ridden a double for Meagher.

“I just love him,” said Beasley. “He’s my best mate and we’ve done it together. This is right up there with the best wins of my career. When the number went up, I broke down a bit.

“Dan’s dad John is not in the best of health – we just love him – and wish he could be here and things were a bit different, but that’s what makes this special.

“Mr Lim has been a wonderful supporter so to win the Derby for him, it really means a lot. Mick Dittman, his racing manager, hasn’t had the best of health of late – get better and I wish you were here to enjoy it with us.”

The admiration extended both ways with Meagher paying tribute to Beasley and to his father, Melbourne Cup-winning trainer John.

“Danny rode him beautifully,” he said. “We’ve been trying to get him settle in his trackwork, it’s been a bit difficult but teamwork makes the dream come true, it’s fantastic.

“It’s a very important win, I feel very privileged – it’s for dad. Everything I do is for him and he taught me everything.”

Meagher has made no secret of his belief that Lim’s Kosciuszko will prove to be a top-level sprinter, despite the fact he is by stout Darley stallion Kermadec (Teofilo). He believes the fact that he managed to extend to 1800 metres will, in time, be seen as one of his greatest performances.

“It’s an amazing thrill – he’s a dead-set 1200-metre to 1400-metre horse and we won a Derby with him,” said the trainer. “We needed everything to go right from the perfect ride to me getting it right with his training, even his feet had issues, so Gary Morley the farrier did a huge job – just a great team effort.

“We worked him together, Dan and I, and while we get it right more times than not, there was a lot of pressure knowing it wasn’t his best distance. It’s a massive team effort, they all worked hard. This horse is not easy, he’s got a few little issues, but it shows you good teamwork always pays off.”

Lim’s Kosciuszko entered with a doubt at the trip after he was outstayed by Relentless in the Stewards’ Cup.

“Last start was a real learning curve – I went out too hard on him but I wanted to test him to see what I could get away with and we got beat but we learnt a lot,” Beasley said.

“And I think it helped us win today as we put the crossover nose band on him, got a beautiful run in the race and got a great kick but geez, I wouldn’t have wanted it to be 1805 metres, but we got it done.”

Bred by Trelawney Stud, Lim’s Kosciuszko is the first foal out of Welcome Stakes (Listed, 1000m) winner Jacquetta, who was purchased by principals Brent and Cherry Taylor for $120,000 in 2016.

Even as the first lot to step foot into the Karaka sales ring at the 2019 New Zealand Bloodstock Ready To Run Sale, he failed to clear his $60,000 reserve and was retained by the Taylors.

Sent to Clayton Chipperfield, a strong trial win at Rotorua in August, 2020 saw him identified by bloodstock agent Phill Cataldo, who secured him for owner Lim Siah Mong.

The rest is history, with the Singapore Derby winner having built up a record of nine wins and two seconds from 12 starts and earnings of SGD$585,988.