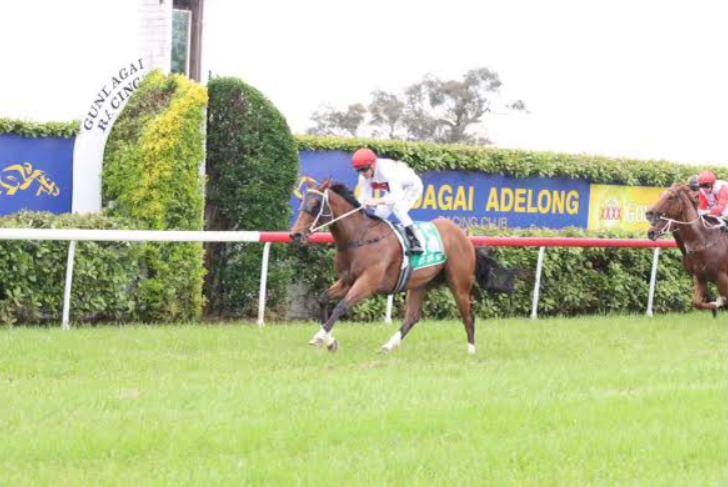 Having grown up in Gundagai, NSW, Sky Racing presenter Anthony Manton is a country lad through and through and he’s passionate about racing in the bush.

So much so that not only does the 39-year-old spend up to 20 hours a week in his car driving to thoroughbred meetings around the southern region of NSW to call races for the national broadcaster, but he also devotes his spare time to being a director of Patriot Bloodstock, a syndication business focussed on buying tried horses for the country circuit.

Patriot Bloodstock launched a year ago and in their first full season as a licensed syndicator, their horses have enjoyed plenty of success with the most recent flagbearer for their white, red, and black colours being Greek Tycoon (Star Turn).

A $16,000 buy through the Inglis December Online Sale, the former Mick Price and Michael Kent Jnr-trained four-year-old gelding has now won two races for the group and banked $45,000 in prize–money.

Greek Tycoon is one of a dozen horses Patriot Bloodstock currently has under the care of leading Albury-based trainer Mitch Beer and his most recent victory was last Saturday in a Class 1 race at Manton’s home track of Gundagai.

“He’s my favourite horse. I love that little horse. We bought him at Christmas time last year around the time we were starting the business off,” said Manton. “We hadn’t had many winners until then so he was a really hard sell. I couldn’t sell him and we had to pay off the PDS so my mum took a share, so did my sister and cousins, and a couple of really good friends. I felt like I wanted to get this horse to win a race,” said Manton.

Given Manton’s Gundagai heritage, Greek Tycoon’s win at the weekend couldn’t have been more fitting.

“He’s done really well this time in. His win at Gundagai meant a lot to me. I had never had a winner at Gundagai all my adult life.”

Since the launch of Patriot Bloodstock, Manton has very cleverly used social media to push the profile of his syndication business. On Twitter, he shared a video of a group of Greeks breaking plates at a party following the win by Greek Tycoon.

“I carried on a bit with the Twitter feed to make it fun and engage the owners a bit more,” he said. “It’s about more than just owning a share, it’s also about building a following.”

Patriot Bloodstock has enjoyed enormous success since teaming up with Mitch Beer, who saddled their first runner in January this year.

So far they have sent him six tried horses and every single one of them has won a race.

“His communication with owners is outstanding. His popularity is phenomenal. Owners just want to be involved with him,” Manton said. “I don’t think they really care about what the horse does. We keep going back to Mitch because horses sell easily and it’s no pressure on us to carry the financial burden for too long.”

Beer, who has firmly entrenched himself in the Albury training ranks, is relishing the relationship with the like-minded Patriot Bloodstock.

“We have built up a very solid partnership with Patriot. In just 12 months we have gone from having our first runner together to now about ten to 12 horses.

“We both see the enormous upside in racing horses in country NSW. They have a really good selection process for tried horses online, that market is getting stronger and stronger, yet they continue to find value and Greek Tycoon is a prime example.

“They are realistic syndicators that aren’t selling the dream of Slippers and Derbies, just good honest fun of racing a horse,” said Beer.

With record prize–money now on offer in the state, Racing NSW has a concerted focus to continue to grow its country product and this, said Beer, is a good thing.

“County racing in NSW just keeps on getting stronger and stronger and both Patriot and I are building our businesses off it. This is something that would be very difficult to do in other states,” he added.

Manton couldn’t agree more and said it’s impacting positively on his own business. Within 12 months of trading, Patriot Bloodstock now has 22 horses on the books.

“The big syndicators are focussed on Sydney, Melbourne, and Brisbane and buying at the yearling sales. This is a real niche we have found.”