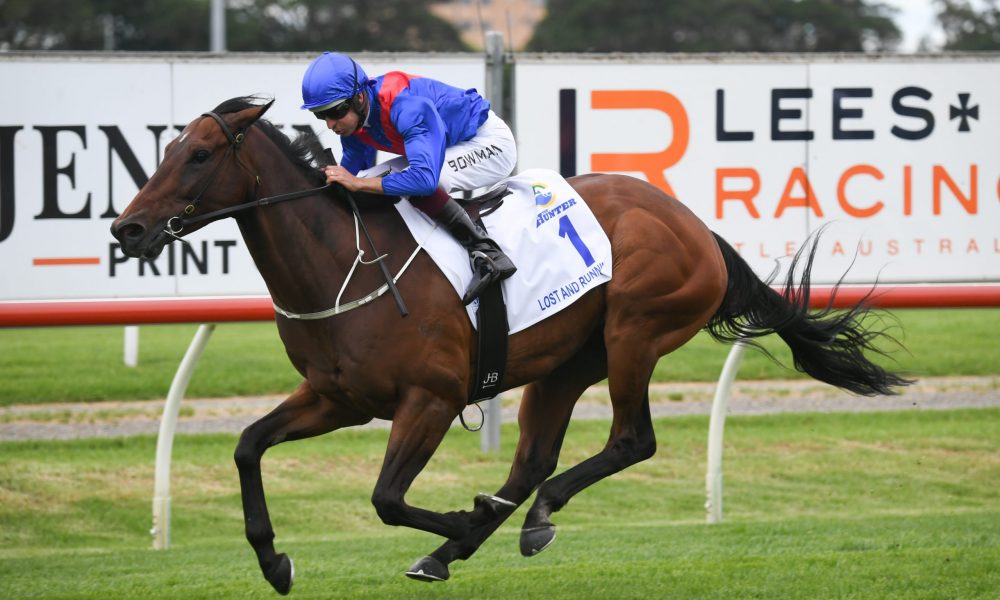 There’s an Italian stallion – in both the literal and the Hollywood sense – who they call Magnum, and who’s been shooting up a storm of late, also in more ways than one.

Per Incanto, with a nickname drawn from the initials PI, is boosting two often overlooked thoroughbred regions: Italy, where the sprinter began racing with five wins from eight starts, his last at Group 3 level over 1200 metres; and the lower North Island of New Zealand, where he stands at Little Avondale stud.

These factors combine in a most exciting fashion in the form of Lost And Running, who has emerged this spring as a sprinter clearly with a massive future.

He was picked out as a yearling by O’Shea and bought for just $40,000. With the Randwick trainer displaying consummate patience, he was not raced until an autumn three-year-old in 2020. And this year he’s gone from taking a Benchmark 72 at Warwick Farm to running fourth in The Everest, before underlining his trajectory in last Saturday’s The Hunter (1300m), a seventh win from 12 which took his earnings past $2 million.

Lost And Running was created by another breeding force of Italian heritage, the Wellington-based former funds manager most people know as Lib, but who we had best give full airing to today as Liberato Petagna. With Street Cry’s best nick for stakes-winners (six) being Danehill, Petagna put his newly-retired four-year-old mare Dreamlife (Danroad) to Per Incanto in his fifth season at Little Avondale, and the result is O’Shea’s new stable star.

“He was a nice, powerful colt,” O’Shea tells It’s In The Blood, “although he had a bit of a parrot mouth. That might affect their price at a yearling sale, but it doesn’t slow them down.

“Per Incanto had been punching above his weight. Carl Holt (a part owner) is big on stats and knew the sire had been hitting some good figures, so we made a bit of a play for his progeny. He does throw really good sorts, and Lost And Running was one of them.

“The Per Incantos can be late blooming, which doesn’t endear them to the Australian market so much. But for me, you can’t beat horses who kick on in later seasons.”

There are dashes of class in the now five-year-old Lost And Running’s female side. Second dam Make Me Dream (Sadler’s Wells) is the dam of three stakes-winners including the Petagna-owned Fast Love, in turn the dam of former Chris Waller-trained stakes-winner Kaonic. Fourth dam Smooth Bore (USA) threw Midway Lady, who won the 1986 Epsom Oaks and threw the winner of the 2005 edition, Eswarah.

Bought as a yearling by Petagna, Dreamlife herself was, however, an unqualified dud on the track, with three unplaced runs in the autumn of 2015.

“She was a nice type, but the problem was she just kept growing after the yearling sales,” Petagna says. “She showed ability, but her knees were average, so with her size there was probably too much pressure on them.

“I’d had a lot of luck sending maiden mares to Per Incanto,” adds Petagna, who these days has some 40 broodmares on his books. “He does seem to upgrade them, but also to clean them up if there are issues around their conformation, like with their knees.”

The other factor making Per Incanto an obvious choice was that Petagna owned shares in the stallion, having bought in when Little Avondale’s Sam Williams took the bold step of importing him in 2012.

“I’d always been fascinated with Street Cry. I loved him,” says Williams. “And he’d had three really cool horses in Australia around then.”

These were Caulfield Guineas winner Whobegotyou, Melbourne Cup winner Shocking, and multiple stakes-winner Predatory Pricer. A certain mare in the US by the name of Zenyatta wasn’t hurting either.

Bloodstock heavyweight Angus Gold, a good friend, knew what Williams was after, and summoned him and close associate Bruce Perry to Europe.

“Angus rang up and said, ‘Get over here and come and see this horse’, so we did,” Williams says. “We looked at a number of colts, and when we saw Per Incanto, I said to Bruce ‘We’re not leaving here without constructing a deal’.”

Per Incanto duly made about the longest trip there is in thoroughbreds, the 19,000 kilometres to New Zealand. But there was one issue.

Freakishly, Per Incanto, a US-bred from the British mare Pappa Reale (Indian Ridge, IRE), had a half-brother also standing in New Zealand, in Patapan (Stravinsky).

“I went, ‘Ooh, it might be hard to market this horse’,” Williams recalls. “And Patapan being only a fair stallion meant Per Incanto could only be a disaster or a success.”

Kicking off at a modest $4,000, he came second on New Zealand’s first season and two-year-old sires tables in 2015, mostly thanks to Group 1 Diamond Stakes winner Dal Cielo.

It was already clear he could sire a good type. Williams had taken two colts and two fillies by his new stallion to Sydney’s Inglis Classic sale in 2014. They gave Per Incanto the second-highest average price – among sires with four lots or more – of $60,875, just $725 below Not A Single Doubt’s figure.

“Everyone was like, ‘Who the hell’s this Per Incanto?’” Williams says. “That was when Classic was before Karaka. We got home, then went to Karaka, and all the Aussies turned up and they all said ‘We just want to see your Per Incantos’.

“I said, ‘Yeah but we’ve got Savabeels, we’ve got O’Reillys” But they were like, ‘Nup, we just want to see your Per Incantos’.

“And so off it went really. He didn’t start off with the best mares. He was getting second tier mares his first five to seven years really, and it’s only been the last couple of years he’s started to pick up these really good mares. He’s had to do it the hard way but he’s a horse that’s upgraded his mares.

“And he’s upgraded them in various ways. He hasn’t been sex-biased. He’s sired Group 1 two-year-olds, left a filly (Charms Star) that’s run second in the New Zealand Oaks and Queensland Oaks; sprinters, milers at Group 1 level. The best thing, though, is he’s been consistent through every crop.”

That consistency has hoisted Per Incanto’s service fee to $25,000, after a 2020-21 season in which he was the leading New Zealand stallion on the Australian premiership by winners-to-runners (61.9 per cent). He’s also starred in Hong Kong, where he was the leading sire by winners last season, with a near identical ratio of 17 from 28 runners. He’s currently 24th on the Australian general list, his 12 winners from 37 runners also including recent Flemington Group 2 winner Justacanta.

His results also led to Lost And Running’s full brother being sold for $210,000 at Karaka last year. Now that Lost And Running has form on the board, a full sister is expected to fetch a hefty price next Easter.

The results have been a welcome reward for Little Avondale, largely isolated away from New Zealand’s better known Waikato studs.

“Per Incanto’s such a great, intelligent, horse to have, with an amazing personality,” Williams says. “He knows he’s good-looking, and he’s really arrogant with the mares, like a George Clooney type. He’s like ‘You mares come to me. I don’t come to you’.

“At the same time, he really wants to please me and his handlers, and he’s so good to work with. But if you put a mare there and a bucket of food over there, he’d walk straight past the mare to the food.

“What’s also been great about his success is that breeders down here are the ones who’ve been cashing in – it’s not just about the Waikato.

“Back in the heyday there were seven studs around here. We’re the only ones now. We’re entering our 82nd yearling sale this year, which makes us the oldest family at the yearling sales, and it’s so cool we’ve now got a sire like Per Incanto who’s putting the farm back on the map again.”