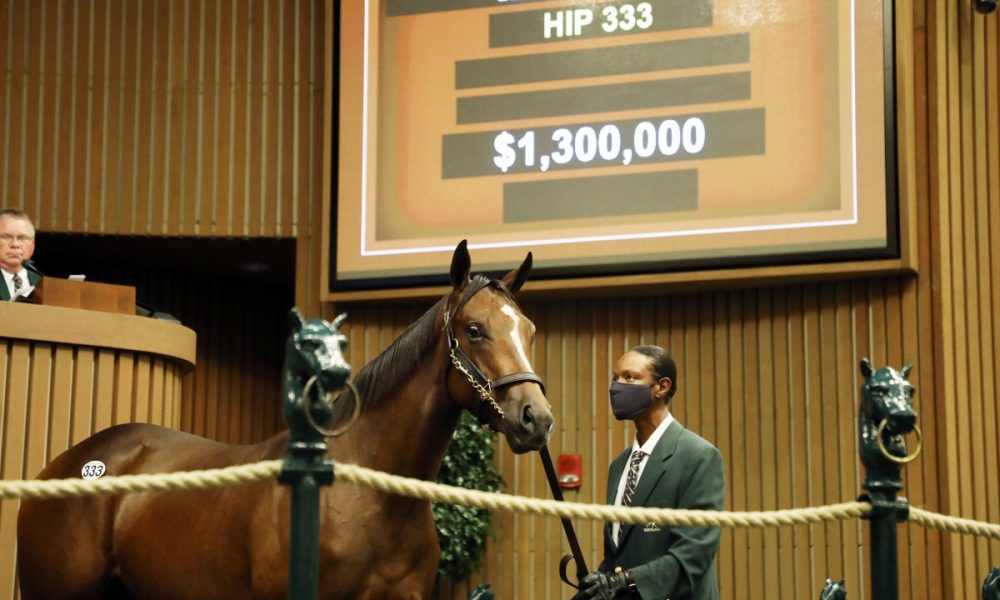 The colt, purchased by Woodford Racing and West Point Thoroughbreds, was the first of two seven-figure yearlings produced by Stonestreet sold on Tuesday.

Magnier’s six purchases on Tuesday were topped by the Curlin colt, consigned as Lot 333 by Gainesway and who commanded the co-second highest price of the day.

Magnier said: “[Gainesway general manager] Brian Graves, when we went down to see first, really, really liked the horse and our guys liked him as well. Barbara Banke has bred some incredible horses over the last couple of years and currently Curlin is doing very well.”

Curlin was Horse of the Year in 2007 and 2008 for Stonestreet and stands at Hill ‘n’ Dale at Xalapa. His daughter Grace Adler won the Del Mar Debutante Stakes (Gr 1, 7f) just before the sale began. He also sired the first two home in the Alabama Stakes (Gr 1, 1m 10f), Malathaat and Clairiere, both of whom were bred by Stonestreet. Malathaat won the Kentucky Oaks (Gr 1, 9f) in April.

Lot 333 is out of the stakes-winning mare Dashing Debby (Medaglia D’Oro), who has produced multiple Grade 1-placed winner Dawn The Destroyer (Speightstown) and multiple stakes winner Bronze Star (Tapit). Dashing Debby was privately purchased by Stonestreet after winning on debut in stakes company at two in 2009.

Consigned as Lot 218 by Woodford Thoroughbreds, agent for WinStar Farm Bred & Raised, the colt is the first foal out of the 2017 Mother Goose Stakes (Gr 2, 8.5f) winner Unchained Melody (Smart Strike). He was bred in Kentucky by WinStar.

“Uncle Mo is doing thankfully exceptionally well at the moment,” said Magnier. “[Lot 218 is] a very nice horse as well, very well built. The plan is to leave him in America. He’s just a lovely, lovely horse and hopefully he’ll do pretty well.”

With Justin Casse serving as agent, Magnier went to $775,000 (approx. AU$1.06 million) for a colt from the first crop of Ashford’s Justify and a half-brother to 2019 champion older dirt female Midnight Bisou (Midnight Lute). The colt consigned as Lot 340 by Hunter Valley Farm is out of the Graded-winning mare Diva Delite (Repent). He was bred in Kentucky by Hunter Valley and Mountmellick Farm.

The filly was consigned by Gainesway, agent for Stonestreet Bred & Raised, and was bred in Kentucky out of the Broken Vow (Unbridled) mare Bella Jolie, a $1.6m purchase by Stonestreet from Ashview Farm’s consignment at the 2015 Keeneland November Breeding Stock Sale.

With Ben McElroy as agent, Magnier bought an Uncle Mo (Indian Charlie) filly for $400,000 (approx. AU$546,000). Consigned as hip 282 by St George Sales, the filly is out of the Grade 1-placed stakes winner Bon Jovi Girl (Malibu Moon) and is a half-sister to Graded winner You’re To Blame (Distorted Humor).

Bon Jovi Girl is in turn a half-sister to dual champion grass horse Gio Ponti (Tale Of The Cat). Pursuit Of Success bred the filly in Kentucky.

Magnier’s final purchase of the day was hip 399C, a $400,000 colt from the first crop of Ashford’s Mendelssohn (Scat Daddy).

Paramount Sales consigned the colt, who was bred in Kentucky by Springhouse Farm and Circular Rd Breeders. He is out of the Grand Slam mare Tessie Flip (Gone West), also the dam of stakes winner Jo Jo Air, who is by Mendelssohn’s sire Scat Daddy (Johannesburg). Tessie Flip is a half-sister to multiple Grade 1 winner Switch (Quiet American).

Quality all the way

The $1.6m Quality Road colt was consigned as hip 300 by Eaton Sales, agent for Stonestreet Bred & Raised. He is out of the Malibu Moon (A.P. Indy) mare Catch The Moon, making him a half-brother to Midnight Bourbon(Tiznow), who won this year’s Lecomte Stakes (Gr 3, 8.5f) and was second in the Preakness (Gr 1, 9.5f) and Travers Stakes (Gr 1, 10f).

“He is fabulous looking,” said Banke. “And, of course, the mare has had some great foals by some lesser stallions. I am hoping this one takes it all the way. I think I will be back in for [a piece of] him. I am excited about that. He was on my list of favourites. We need sire power; we need another sire.”

“The plan is to gather a partnership together with Woodford Racing, West Point [Thoroughbreds], and a few others and Barbara Banke,” he said. “He will go to [trainer] Shug McGaughey.

“If you’re doing it on your own, it’s tough to compete with the partnerships. But I think it’s exciting for people to get in and be involved in high-end colts like this, which they normally couldn’t do if they did it on their own.”

Eaton’s Reiley McDonald said of hip 300: “Beautiful colt. Beautiful mover. Every day he seemed to flourish and get a little better out here.

“Bill was our neighbour [at the sale with Lane’s End]; he kept poking his head around the corner. I think he fell in love. Terry Finley [of West Point] followed suit.”

“Our broodmare band is getting better all the time,” said Banke. “We have new ones to add after they race. For example Mia Mischief is in foal this year. Lady Aurelia has a really nice Curlin colt, but I doubt he will come to the sale; he is my pet.

“We upgrade our broodmare band all the time. We retire some of them, like Lady Aurelia’s mother [D’Wildcat Speed]. She has a Justify weanling that is her last. We try to keep the broodmare band current – and really fast. We raise them right.”

From four Stonestreet-breds offered on Tuesday, three were sold for a total of $3.65m (approx. AU$4.98m).

By Christine Oser and Lauren Gash of Bloodhorse
Features