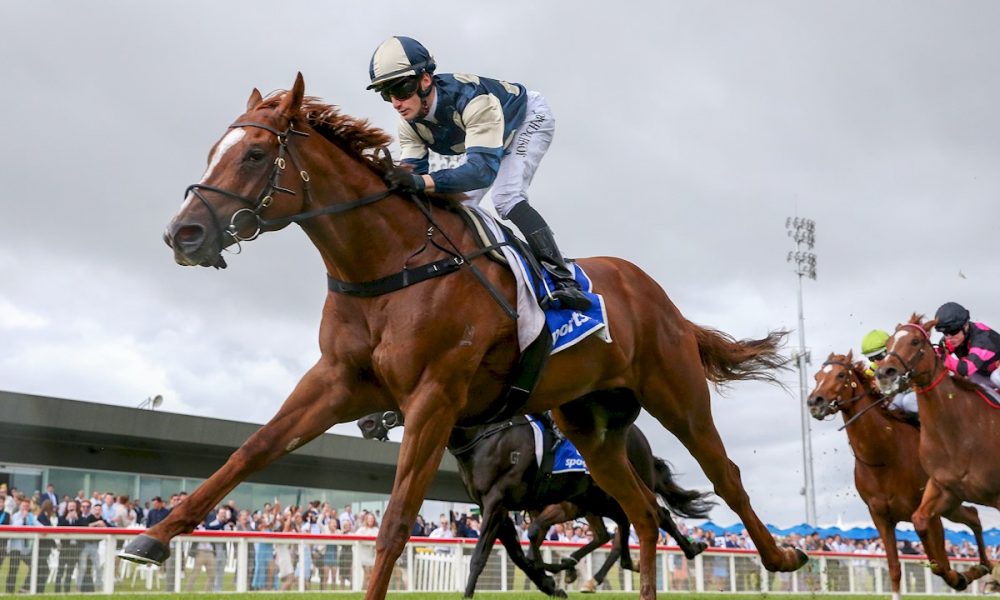 Among the many layers in the storied success of Written Tycoon (Iglesia), the great sire’s equal-top cross is via mares by Redoute’s Choice (Danehill), with 26 winners from 33 runners, identical to Flying Spur (Danehill).

So, like going to school off a playing partner’s putt, a generation later it was with some zeal that the breeding team behind Capitalist (Written Tycoon) targeted daughters of Redoute’s flagbearer Snitzel (Redoute’s Choice) when Written Tycoon’s Golden Slipper (Gr 1, 1200m) -winning son began his stud career in 2017.

The results have been equally stunning, if not better. Snitzel has emerged as Capitalist’s No 1 nick, with five winners from eight runners. A case can be made that the blend has also matched the two dads’ one stakes-winner, with the dashing Profiteer taking the $2 million Inglis Millennium (RL, 1100m) last season.

What’s not in any doubt is it has hatched a very promising three-year-old colt in Marine One (Capitalist) who, after being Group 3-placed on debut last spring, made it three wins from eight starts – and three from his past four – with a dashing stroll over 1000 metres at Pakenham last Saturday.

Having finished just behind the placegetters in his Blue Diamond Preview (Listed, 1000m) and Blue Diamond Prelude (Gr 3, 1100m) in the autumn, Marine One’s spring form has sent a loud signal the Ciaron Maher and David Eustace-trained chestnut is in the midst of maturing into a very formidable sprinter.

The former champion Australian two-year-old, winner of four of seven starts, retired to stud prematurely after chipping a fetlock as a spring three-year-old, and became an instant success at Newgate Farm.

He topped the two-year-old and the first-season sires’ table by winners (20 from 61) and via his four stakes-winners including Champagne Stakes (Gr 1, 1600m) victor Captivant, and placed second on earnings on both charts behind Newgate barnmate Extreme Choice (Not A Single Doubt).

And Capitalist has carried on the strong work this season, sitting atop the second-season list on winners (21 from 87) and second by earnings to Maurice (Screen Hero).

Thanks mostly to Caulfield Guineas (Gr 1, 1600m) runner-up Captivant, he’s now also fifth among three-year-old sires – behind such luminaries as Snitzel, Street Boss (Street Cry), I Am Invincible (Invincible Spirit) and Maurice – while sitting equal third by winners (20 from 75 runners), and equal-top with Snitzel by wins (32).

“His fee has more than doubled this season and he was booked out within a week of us announcing it,” Newgate’s Henry Field tells It’s In The Blood. “He’s bred around 200 mares this season and he’s still going, and given the success of horses like Marine One, he’ll pick up a few more December.

“It’s great to get a ready-made stallion who hits the ground running like this, with colts, fillies, arguably the naturally fastest two-year-old in Australia last year in Profiteer, and a Group 1 winning miler and Guineas placegetter in Captivant. So he’s got versatility, with both sexes and sprinters and middle distance horses.

“He’s a horse that gets horses with class, but just lots of winners, mature and precocious horses, and he’s proving to be a very important stallion on the Australian landscape.”

The Snitzel in Marine One comes from his Gerry Harvey-bred dam Golconda, who showed enough toe to win the Merson Cooper Stakes (Listed, 1000m) before also running a length and three-quarters third in Set Square’s (Reset) VRC Oaks (Gr 1, 2500m) of 2014.

She was bought as broodmare the following year for $400,000 by the China Horse Club, part of the Newgate-linked brains trust which has bred from her and that also includes Gavin Murphy’s SF Bloodstock and Blake Sandblom PL.

After an initial mating with another Newgate resident in Deep Field (Northern Meteor) – which yielded a $175,000 yearling filly who is unraced – Golconda was an early booking for Capitalist’s first season. That came after advice from bloodstock maven Michael Wallace, amid other reasons.

“Pedigree-wise, we thought the Written Tycoon-Redoute’s Choice cross was good,” Field says, “and now we’ve bred two very good horses on that cross in Profiteer and Marine One.

“But also physically, from a structural point of view, Capitalist has got the most powerful straight hind leg, and I felt that really complements the Snitzel mares’ hips and hind leg. So physically we thought it was a good mating as well.

“The Snitzel cross with Capitalist has indeed proven dynamite. And I’d say there’s no stallion who covered more Snitzel mares as Capitalist this year.”

So impressed was the team with the young Marine One they sent Golconda straight back to Capitalist. Marine One sold for $500,000 at the Magic Millions Gold Coast Yearling Sale in 2020, and two months after his debut third in the Maribyrnong Plate (Gr 3, 1000m), his brother fetched $975,000 at the same sale a year on. He’s the colt now known as Cannonball, last seen running a one-length fourth in Rosehill’s million-dollar Golden Gift (1100m) behind the unbeaten Sejardan (Sebring).

The team went straight to the source last year and Golconda now has a filly foal by Written Tycoon at foot, but is back in foal to Capitalist, with Field believing she’ll be mated to Capitalist “for many years to come”. (He’s also handing out a big tip for Profiteer’s two-year-old sister Asteria to further boost the Capitalist-Snitzel cross, the Mark Newnham-trained filly having romped home with a Randwick barrier trial on Tuesday).

With a gender-balanced 4×4 cross of Danehill (Danzig), Marine One’s pedigree contains a good dash of class in the female line, albeit short on Group 1 winners.

Golconda’s dam Eureka Jewel was by the grand broodmare sire Semipalatinsk (Nodouble) and she was one of the top six racetrack earners from his long career at stud, winning four stakes races including the 1996 A V  Kewney (Gr 2, 1400m) and AJC Adrian Knox Stakes (Gr 3, 2000m) back-to-back before finishing a half-length second in Kenbelle’s (Kenmare) Australian Oaks (Gr 1, 2400m).

Eureka Jewel also threw Sermon (Octagonal), a gelding who won seven races including the Cranbourne Cup (Listed, 2025m) and the highlight of the meeting in which his younger relative Marine One shone last Saturday, the Pakenham Cup (1750m), of 2009.

Capitalist has 42 lots for sale at next month’s Magic Millions sale, two from Snitzel mares (Lots 471 and 516) and one (Lot 155) – which is among eight offered by Newgate – from a Redoute’s Choice mare in Janast, an unraced half-sister to the stakes-placed Forbes.