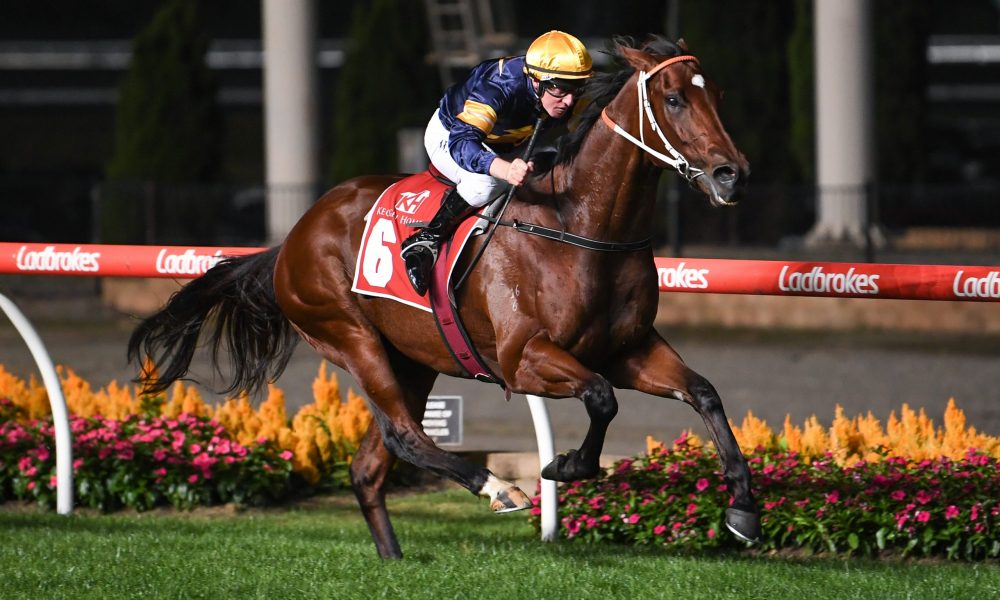 It’s a fine line between pleasure and pain. So, too, between madman and genius.

When Rick Jamieson watched Masked Crusader win the Group 3 The Heath so effortlessly at Caulfield last Saturday, hanging over the pride in another cracking piece of breeding was a large cloud of melancholy.

It was the Gilgai Farm maven who in 2015 boldly backed his judgment and took his new mare She’s Got Gears a few miles down the road to meet Swettenham Stud flagbearer Toronado. Jamieson’s first mating of the mare has brought Australian racing this exciting Hawkes-trained five-year-old, who’s now co-favourite for The Everest.

But the win was tinged with angst as well. Just two weeks earlier, the 14-year-old She’s Got Gears died of colic, only a week before she was due to foal Masked Crusader’s full brother.

“I lost them both,” Jamieson tells It’s In The Blood. “The horrors of breeding. As they say, it only happens to the good ones.”

“It was heartbreaking for the whole of their farm,” says Swettenham’s Adam Sangster. “I just really feel for Rick and all at Gilgai. She was such a lovely mare. It can be a very cruel game this.”

Masked Crusader’s early form – wins at Caulfield, Bendigo and Randwick  in autumn last year – convinced Jamieson he was onto a good thing, hence the return of She’s Got Gears to Toronado.

A daughter of I Am Invincible’s sire Invincible Spirit, She’s Got Gears was a speedster who debuted with a 1000-metre Listed win at Flemington, was placed at Group 3 in the Maribyrnong Plate and Blue Diamond Prelude, but then placed only once more in nine starts before retirement.

At stud she threw nothing spectacular in the form of Outlaw Kate (Exceed And Excel) and Cosenza (Fastnet Rock). Neither had raced, however, when she changed hands for a hefty $700,000, coming into Jamieson’s care in-foal to Fastnet Rock again. That led to High Ratio, a $340,000 yearling who won two of ten for Mick Price, including at Sandown, before being exported.

Jamieson delves deep into pedigrees, and has developed his own software to help the process. But sometimes a leap of faith is also required, and he admits he took one on his first move with She’s Got Gears, driven to blend her sire with a son of High Chaparral in Toronado.

“Invincible Spirit has proven to be a very poor broodmare sire,” says the straight-talking Jamieson, and statistics back his statement. “But I think he’s genetically really well-connected to High Chaparral. So it was putting those two together to get the reinforced mix that I was hoping for.

“I can’t tell you any other examples off the top of my head, but it was my belief at the time.

“I was a bit worried about the mare, because she was by Invincible Spirit, but … well, it was a shot at the dartboard really. I just think I Am Invincible daughters should go well with sons of High Chaparral, like So You Think, Toronado, Dundeel. They’ll prove out over time I think.”

It was some call. So far the stats show Invincible Spirit mares bred to Toronado have produced precisely one horse, for one stakes-winner – Masked Crusader. An ultra-impressive individual like his parents, he was a $340,000 yearling who became a Group 1 winner in this year’s William Reid Stakes.

But there was, of course, far more backing behind Jamieson’s shot at the dart board than sire and dam, or even grandsire and damsire. Jamieson typically delves back nine or ten generations in looking for groups of names he knows work well together – like a composer returning to a favoured series of notes, or perhaps a cricket buff contemplating Warne, McGrath, Gilchrist and Ponting.

“I call them clusters, and it’s what I look for. You probably think I’m nuts. Sometimes I think that too,” says the man nutty enough to have brought us Black Caviar.

He agrees Toronado, while in the ascendant, is not quite in the Snitzel class just yet, “…but basically, any sire is capable of producing a really good horse if you get the mix right. I try to work out where the strengths are in a pedigree and I just felt those two went together very well.”

In making Masked Crusader, the magical harmony came through a 5×4 cross of the mighty British sire Kris, a 1976 drop. Through Toronado, Kris was the third sire along High Chaparral’s maternal line, as sire of the mare Kozana (GB). In She’s Got Gears, he sired Invincible Spirit’s dam Rafha (GB).

“Kris was very strong, and Kris in both pedigrees of Invincible Spirit and High Chaparral brings two very strong female lines. That was 50 per cent of my decision,” Jamieson says. “I hadn’t doubled up on Kris before, as I’ve never had the opportunity.”

Jamieson was also keen on the triple presence of American stallion Buckpasser (1963). He has two daughters in Toronado’s maternal line. One of them – Sex Appeal – is also in Masked Crusader’s maternal seventh generation, and her dual appearance counts as another of Jamieson’s favourite things.

“Sex Appeal being repeated was a good thing,” he says, not joking around.

He lists off other dual presences that come up behind Kris in his clusters, like Rockefeller (GB, 1941), Relance (FR, 1952), and Tantieme (FR, 1947), who straddles both sides of the pedigree with three appearances. It would take far more space than this column to unravel the evidence, but Jamieson knows these names mingle well.

“Everything that sits back behind Kris – Rockefeller, Relance – they’re all really strong, and if you can find what they link with, you can be in business. It’s still a thousand-to-one to breed a good horse, but I’m convinced this approach gives us a really good chance to produce a decent horse, though these blends can be hard to find and put together.”

Sangster is understandably excited about the current season with Toronado, now the sire of seven stakes winners in Australia, also including Affair To Remember, Laverrod and Still A Star, while the Lindsey Smith-trained Corner Pocket has won seven in a row.

Toronado – winner of Royal Ascot’s Queen Anne Stakes in 2014 in a faster time than Frankel two years before – shuttles to the Haras de Bouquetot stud of his Qatari owners Al Shaqab in France, but Sangster believes he is best suited to several Australian female lines.

“He’s doing a good job in Europe, but his bloodline seems to be one which is working particularly well down here with our gene pool of mares,” Sangster says. “You see it with other High Chaparral stallions like So You Think and Dundeel, plus High Chaparral is not as commercial in the northern hemisphere as he is down here.”

Having begun stud duties in 2015, Toronado’s fee this year has risen from $35,000 to $49,500, largely on the back of Masked Crusader, who helped him to a personal best 19th on the Australian general sires list last season.

“He covered 197 mares in 2019, 205 last year, and this year we’ll be able to give him a reduced book now that his numbers are out there,” Sangster says of Toronado, who’s also very popular in Hong Kong.

“There’s 25 colts and geldings by him who’ve gone to Hong Kong in the last two years, so that’s a massive pool taken out of Australia. People say that must be bad for the horse, but we know he does it with fillies, with colts and geldings, across the spectrum.”

While She’s Got Gears may be gone, Jamieson still has her daughter Miss Conduct (Dissident) – a Sale winner from nine starts – who he thinks might go even better with Toronado. Meanwhile, She’s Got Gears’ last living offspring, Sebring gelding Insurgence, is provincials-placed for Team Snowden from two starts.