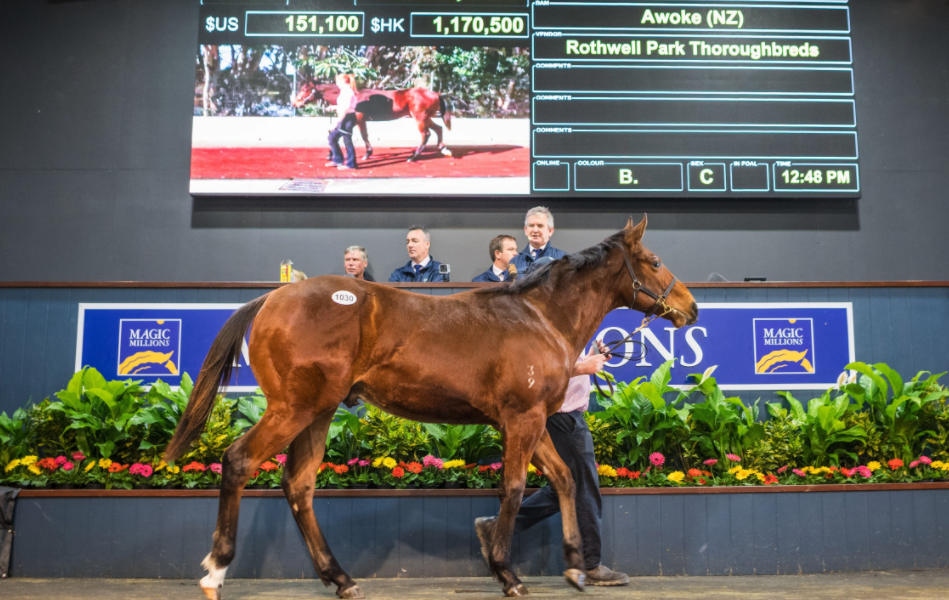 Hunter Valley pinhookers are relying on the progeny of two high-profile first season sires to appeal to a wide cross-section of buyers at next year’s yearling sales and they backed their judgment by purchasing the two highest-priced lots at the Magic Millions National Weanling Sale yesterday.

The session-topping Merchant Navy colt, the most expensive foal by a first season sire to sell this year, was offered by Rothwell Park who was also the vendor of the $410,000 Zoustar (Northern Meteor) weanling colt sold on Thursday.

Connolly made a quick-fire impression on day two with a $160,000 outlay on a Fastnet Rock (Danehill) filly from the family of Godolphin’s Group 2 winner Ghisoni (Lonhro) before adding the Merchant Navy colt six lots later.

“It’s great to be here on the Gold Coast to see the quality weanlings on offer and I have to commend all the vendors who have turned out their horses in excellent condition, particularly the last two drafts we’ve purchased from in Rothwell Park and Aquis Farm. The horses looked outstanding,” Connolly told ANZ Bloodstock News.

“We’re very excited to have a Fastnet Rock filly going forward and a Merchant Navy colt. It is so good to actually work with Merchant Navy again, being so close to the family having worked at Segenhoe for years.

“Having him foal there and watching his racing career, I’ve been very close to the whole process.”

The colt is the first foal out of the Group 1-performed Awoke, who is in foal to Deep Field (Northern Meteor) and was purchased by Nick Vass for $350,000 at the broodmare sale earlier this week; he was catalogued as Lot 1030.

“The Merchant Navys are very good solid conformed types. This colt moved very well and I thought he’d appeal to so many people with his family being very up to date and modern. He’s a standout colt for me with the way he moved,” he said.

“We will aim to come to the sales and reoffer these horses for people to come and see and my prediction is that there will be a lot of people looking at them.”

The Fastnet Rock filly, meanwhile, is the fourth foal out of the unraced Antillanca (Street Cry), herself a half-sister to Ghisoni and daughter of Surround Stakes (Gr 2, 1400m) winner Portillo (Red Ransom). She was consigned by Aquis Farm as Lot 1024.

“She’s a nice type of Fastnet filly like Atlantic Jewel. It’s a very modern family with Darley and Godolphin in the second dam.”

With the intention of reoffering his weanling purchases as yearlings, Connolly believes the pair will find favour with trainers and owners even amid the coronavirus pandemic.

He said: “The way the economy is at the minute I think we all foresee a little bit of a drop off in the market but outstanding types will always sell.

“Trainers will always want the nice horses, so I am confident that the horses we’ve purchased, for that reason, will meet the market.”

Earlier in the full-day session, a Russian Revolution colt fitted the criteria for Sledmere Stud and pinhooking partner Cangon Stud and Murphy believes the just-turned yearling may have even been deserving of a price tag higher than $200,000.

“We only really came here with the intention of buying a couple of horses and he was the one we definitely wanted to leave with and hopefully we can bring him back here next year,” the Sledmere principal said.

“We’re very big fans of Russian Revolution. We’ve seen his stock at home and I think his stock will come here in January and be very popular.

“When the trainers get to see them I think they will see what we see. They are good, athletic horses who are well-muscled.”

A half-brother to MRC Vain Stakes (Gr 3, 1100m) winner Got The Nod (U S Ranger), the colt is the eighth foal for Silent Cash (Secret Savings), an unplaced half-sister to the juvenile-winning, Group 2-placed Silent But Deadly (Choisir).

Consigned by Newgate Farm, the home of Russian Revolution, he was catalogued as Lot 947.

Murphy said comparing weanlings against their own stock at home had played an important role in determining the likely rate of development of the foals offered this week.

“As I’ve said to a few people looking at horses this week, I think they change so much (from May to July) and, before we go to a sale, we always walk around the paddocks at home to look at what we have so when you get to the sales you know what you’re comparing to,” he said.

“Even from our own draft, we’ve got horses who will change a lot in the next few months.

“That is why it’s important to talk to vendors and ask them where they think they are in their stage of life. This is what we do, so hopefully we can get it right.”

As for the market over the past two days, Murphy was matter of fact.

“Like every sale I have ever gone to, the good horses have sold well,” he said.

The leading buyer at the sale was Lime Country Thoroughbreds in conjunction with agent James Bester, who purchased four lots at an average of $112,500.

“James has advised clients of the farm in the past and he was my pick for a weanling agent to work with. We’ve used different agents for different things,” Lime Country’s Jo Griffin said.

“But as far as weanlings go, James always buys an athlete, a race horse before anything else. That’s his top priority and I think as the market is what it is trainers are more and more racehorse-focussed above pedigree.

“They can be more forgiving on some issues and James can see past the obvious issues.”

As could be expected, all measures year-on-year at the Magic Millions National Weanling Sale declined, but importantly, trade has occurred during the Covid-19 pandemic.

Last night, there were 186 weanlings sold at an average of $41,485 at a median of $24,500. The clearance rate was at 72 per cent which held on what was achieved on the small day one afternoon session.

“When you look at what is going on in the world I am satisfied with the results, although I did expect there to be a little bit more strength in the middle end than what there was,” Magic Millions managing director Barry Bowditch said last night.

“But on the whole, the good horses sold seriously well and there were plenty of bids on the right product. As we’ve seen in all sales this year, anything that was off the pace seems to struggle a little bit more than it used to and I guess that is understandable.

“Vendors are very happy with the way the sale went and all-in-all they have come here looking to meet the market and in most cases they have.”

The two-day National Yearling Sale will take place on Monday and Tuesday next week.