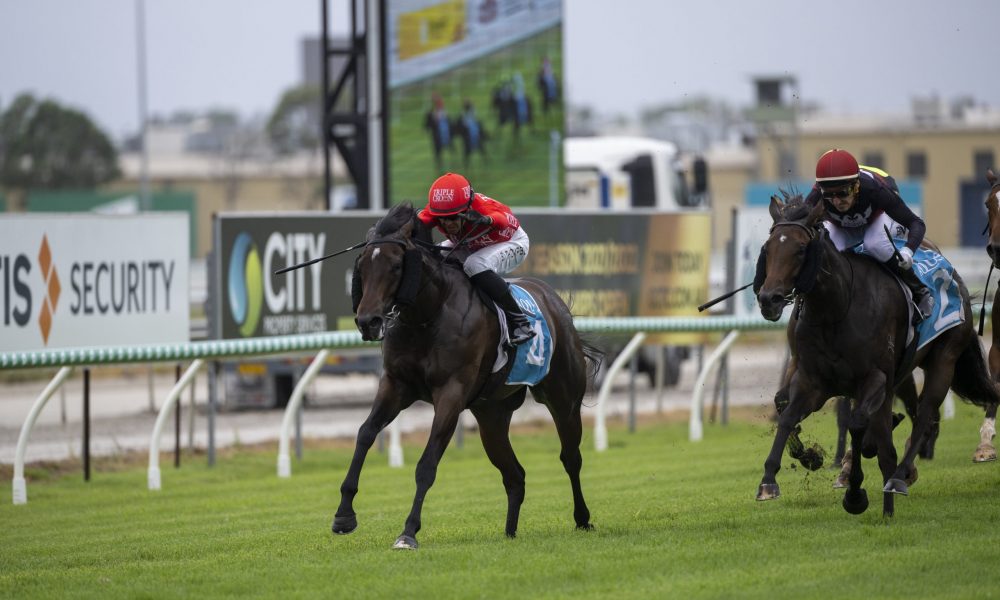 Breeding behemoth Newgate Farm is not just making hay out of the fertile fields of the Hunter Valley. It does extremely well out of dirt, too.

For several years one of its most vibrant Fields, Henry, has been making three or four trips to the USA annually, tapping into a stream which, here in Australia, has been starting to trickle gold.

The latest product of Newgate’s pursuit of American speed mares, Miss Hellfire (Hellbent), claimed last Saturday’s Gold Pearl (1100m) at the Gold Coast and is one of the main fancies in this weekend’s Magic Millions 2YO Classic (RL, 1200m).

She’s an extremely fast part of the first crop of Yarraman’s son of their headliner I Am Invincible (Invincible Spirit), Hellbent, who’s making fair play as a first season-sire.

And she’s a piece of an American puzzle being built by Newgate which is helping change a corner of the Australian thoroughbred picture.

Henry Field, in conjunction with US-based cohorts Tom Ryan and Gavin Murphy of SF Bloodstock, has feverishly pursued his American dream. He respects European blood, but is almost in awe of the speed inherent in some of the many US mares his operation has imported.

Miss Hellfire went to last year’s Magic Millions sale described by Field as “a good type out of a good mare by a young stallion who we think is a real chance”. She ended up being Newgate’s equal-cheapest lot at that auction, with Triple Crown Syndications paying just $60,000 for her.

Part of the reason was her dam, Peace Time (War Front), was only placed. More important for Newgate, though, was that she was out of a mare in Santa Catarina (Unbridled), who won at Grade 2 and was placed four times at Grade 1 level, up to 1700 metres, with most of her work on dirt tracks.

Some purists might swear by turf. Field, however, is enticed by the reality that racing on dirt in the US has evolved a faster, tougher thoroughbred.

“I love crossing those good American mares with Australian speed. If you do that it’s an incredible formula,” Field told It’s In The Blood.

“In the last three or so weeks all the two-year-old races here have been won by very talented two-year-olds by fast Australian stallions out of fast American mares. I think it’s a great cross.

“Part of the attraction of American horses is it’s outcross blood, which puts hybrid vigor in the matings, and it gets you away from Danehill.

“But also, the fastest horses in America are very fast. They jump and go hell-for-leather from the gates to the wire.

“It’s probably evolved this way because on dirt, it’s important to go fast out of the gates to get clean passage. On turf, they can probably go slow early and fast late, whereas on dirt they go fast early and slow late.

“And when we’re buying broodmares, we like to buy the really fast ones of those – horses with clean gatespeed.”

Another example of Field’s point is Russian Conquest (Russian Revolution), a Team Snowden stablemate of Miss Hellfire’s who’s also among the leading chances for Saturday’s 2YO Classic. He’s also a Newgate-bred by an American mare in My Conquestadory (Artie Schiller).

Field adds he also likes to see turf performance in US pedigrees “so they can adapt to Australia”. And while speed is king, adeptness over longer trips helps too.

“If they can run a mile on dirt, then they’ve got to be a really tough horse,” he said.

“They’ve got a reputation for using a lot of medication in America, but I think the image of their medication far outweighs the reality of it. And I would say that pound for pound, the fast American miler is probably tougher than most horses going around.”

Field credits Ryan and Murphy for their work in the US, where Newgate bought Peace Time at Keeneland in 2016.

“Tom and Gavin are incredibly astute on American form and bloodlines, and pick these mares out at the sales for us in America,” Field continued.

“And a huge asset when you cross with Australian stallions is you get hybrid vigor. It doesn’t matter if you’re breeding horses, sheep, cattle or chickens, hybrid vigor’s a very important thing.”

“Peace Time is a big, powerful robust mare and Hellbent is an athletic, medium-sized son of I Am Invincible,” Field explained. “And we liked the idea of breeding a War Front mare to an I Am Invincible. I think the cross is very good.”

Miss Hellfire’s breakthrough win for Hellbent last Saturday has propelled him to fourth on the first-season sires table. He’s also the sire of the Annabel Neasham-trained Bohemian Daisy, who was third at Group 3 level at Flemington’s Cup carnival.

The nine-year-old Hellbent made a strong showing across the first two days of the Magic Millions sale this week, with eight lots averaging $302,000.

“Hellbent’s had a great start,” Mitchell said. “You’re always hopeful to get your first winner early on. He’s had a couple run very well in group races, but to win on Saturday was great, with hopefully lots to come.

“He likes nice, big, quite mature mares. He’s a beautiful horse who stands 16 hands. He’s not the biggest horse. Nice precocious mares suit him, but I think that’s the case with all sprinting stallions.

“With his fee, you’ll get some nice mares and some not quite so nice, but we’ve had good support and we’ve heavily supported him ourselves.

“We’re very positive about his future.”