Moreira and Purton dish a double delight at the Valley 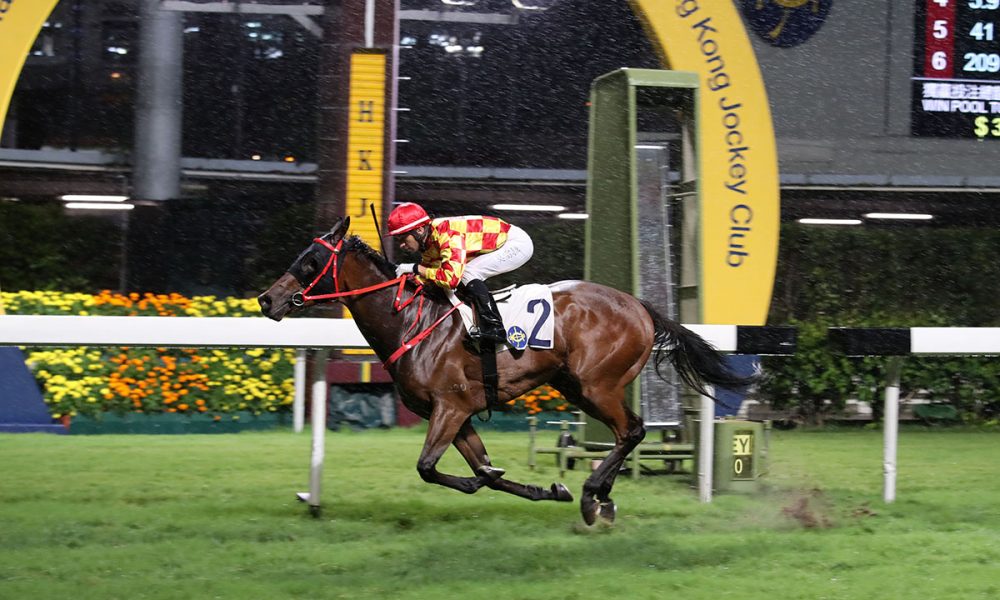 Joao Moreira and Zac Purton continued their enthralling back-and-forth contest for the jockeys’ championship with a double each at Happy Valley on Wednesday night.

“It’s such a journey; but it’s a good one!” Moreira beamed after having the final word – until next time, at least – on Shining Ace (Testa Rossa) in the finale, the Class 2 Ho Chung River Handicap (1200m).

Hong Kong’s two standout riders – each a three-time Hong Kong champion – started the night all square on 117 wins and ended all even on 119.

Purton was fastest off the mark, edging one ahead when Dionysus Collin (Dream Ahead) landed race two, the Class 4 Tan Shan River Handicap (1800m). It was the defending champion’s first sit on the four-year-old and his booking made a difference as the Francis Lui-trained gelding knuckled down to earn a maiden win at start 20.

Moreira fired an immediate reply in the next with a sublime make-all ride on the Caspar Fownes-trained Lightning Steed (California Dane) in the Class 4 Tai Shing Stream Handicap (1650m).

“I rode him the time before but Caspar said this time it would be a bit different. The circumstances today just allowed me to ride the horse how he likes to be ridden and he quickened down the straight in a way that he was never going to get beaten,” Moreira said.

The big two were kept quiet through the middle part of the card but Purton was back in front when the Danny Shum-trained Golden Dash (Snitzel) took the Class 3 Lam Tsuen River Handicap (1200m) under a sweetly-judged steer.

“We had a good draw so obviously that helped but Danny’s done a good job to bring him back from injury, he’s given him plenty of time and a couple of runs to get him ready for this,” Purton said.

“He drew the right gate (one) and enjoyed a little bit of give in the ground – he won’t be out of place in Class 2.”

Purton went into the last with a leg-up on the 3.3 favourite Amazing Star (Darci Brahma) but Moreira was not to be outdone. The ‘Magic Man’ ensured Shining Ace held the rail in a prominent spot, applied pressure to Purton’s mount around the turn, and, when that rival began to fade, gave the John Size-trained four-year-old a dig and enjoyed a rolling run to the line through the rain.

“He just loves the wet; when he won with me before it was raining and the ground was soft,” Moreira said.

“I was surprised that he was able to bounce out so quickly and challenge those fast horses up there, but as well as he was going, he was never going to stop. It’s a great training achievement. All the praise should go to John – he’s improved this horse so much.

“Hopefully the winners will keep on coming,” he added.

Classic Unicorn (Per Incanto) appeared to have put his career back on the rails with a blazing success in the Class 3 Kam Tim River Handicap (1000m).

The Chris So-trained four-year-old set a fast tempo under Derek Leung and just kept on going to slam his rivals by four lengths in a sharp time of 56.38 seconds.

Classic Unicorn was flagged as a horse of exciting potential when he opened his career late last season with two impressive wins down the Sha Tin straight. But the chestnut flopped well below those expectations in two sub-par efforts during the first part of the current campaign, so much so that his handler moth-balled him for a spell.

“It’s been a long time! Early this season he was quite disappointing and at the end of last season everyone expected him to be like a superstar,” So said.

“Mentally, he’s not been 100 per cent; his first two races this season, when the horses squeezed him, he wasn’t comfortable, he got his head up and he didn’t know what was going on, so I told the owner to give him a small break and give him time to learn more.”

Classic Unicorn returned in late April from a four-month spell to finish fourth at the course and distance and that effort sharpened him for this evening’s exercise.

“Last time at Happy Valley he ran okay but this time he has improved a lot and he had the good draw (gate three). It seems that his head has been the problem – he’s a big horse with a long stride and he still has potential, he just needed time to mature.”

Cruz edges towards a championship challenge

Tony Cruz moved to within nine wins of trainers’ premiership leader Ricky Yiu when Bullish Brother (Reward For Effort) took section one of the Class 4 Shan Pui River Handicap (1200m) under Vincent Ho. Cruz has 15 more meetings to reel in the long-time leader, who drew a blank for the fourth meeting in a row.

“This horse was drawn one and that was a big help on this track tonight, he got a really good position and then I knew he was a big chance,” Cruz said. “He’s had some issues with his knee so I’m very happy we could get this win.”

Peter Ho, on the other hand, is at the foot of the table and top-weight Magnificent’s (Zebedee) much-needed victory under Dylan Mo in the Class 3 Nam Chung River Handicap (1650m) was only the stable’s 13th this season for prize money of HK$18.5 million. The handler requires 16 wins, or 14 wins plus HK$21 million in prize money, to avoid a strike on his record in a three and you’re out system.

Alfred Chan partnered his second winner for the Dennis Yip stable, 11 days after his first, with a make all ride on top-weight Flying Bonus (Snitzel) in section two of the Class 4 Shan Pui River Handicap (1200m).

Hong Kong racing continues at Sha Tin on Sunday when the day’s feature will be the Champions & Chater Cup (Gr 1, 2400m), the final Group 1 of the season.