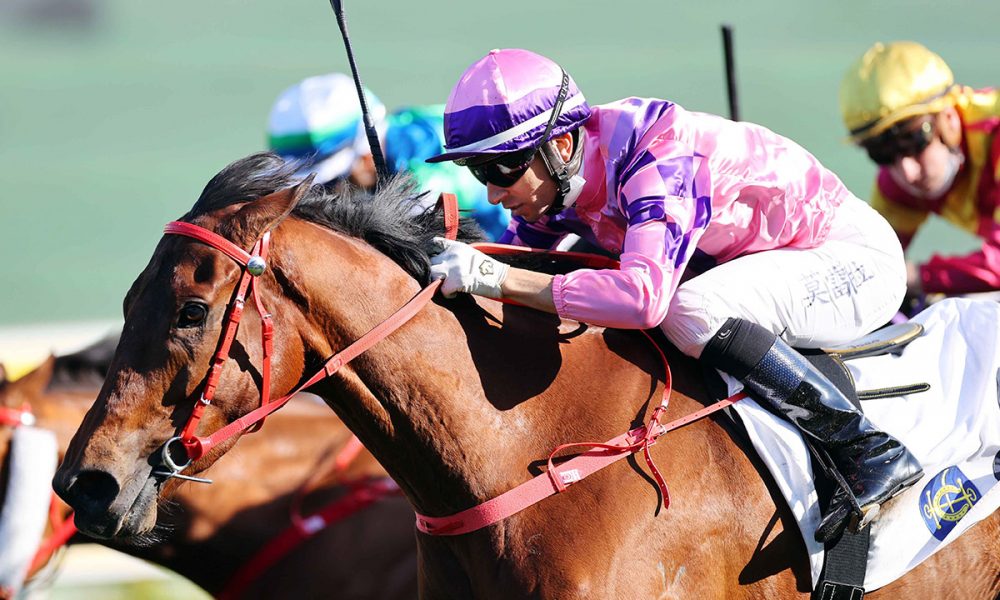 Accelerating a push for a fifth jockeys’ championship, Joao Moreira surged to a century of winners in a Hong Kong season for the seventh time with a double at Sha Tin yesterday, crowning the triple-figure milestone by also wresting the lead in the race to the 2021/22 title from arch-rival Zac Purton.

Reaching three figures in a Hong Kong season has become almost a formality for Moreira since his arrival here in 2013/14, but the Brazilian’s elation at reaching the mark for the seventh time in nine campaigns was evident after Running Glory (Kermadec) swept home in the Class 3 Sha Lo Wan Handicap (1800m).

“It’s nice to hit that mark – fantastic,” Moreira said, four days after becoming only the third jockey in Hong Kong history to post 1,200 wins or more behind Douglas Whyte and Purton.

“I’m very proud, very pleased. There is no doubt I would not be getting there without all the support I’ve got and it’s a mark which, sooner than later, I want to leave far behind.”

Size’s brace leaves the 11-time champion with a 63-61 buffer over Frankie Lor in the trainers’ championship.

Moreira was especially delighted to reach his latest century aboard Running Glory.

“He’s such a genuine horse. He tries so hard so, honestly, it’s not a surprise that he won today. He had a beautiful run through the race and he needed just a little bit of luck on him. I’m just a lucky boy to be steering him.”

“He’s a nice horse. If they can win their first start, they’re obviously a chance to get into Class 3 and be competitive,” Fownes said of the Rich Enuff gelding he purchased on the recommendation of Campbell Rawiller.

“In my mind, I always thought he’d be a horse who could hit 80 points, obviously he’s a long way off that, but hopefully we can just get him there with each progression.”

“I know his raw ability is well above what we’re seeing at the moment. We just have to get him to relax and do things better. Blake said he was under pressure with 200 metres to go but he fought today because he was smoother through the first 400 metres,” Hayes said. “So, if we can just keep on harnessing that, working on that, he’s a 120-plus (in the handicap) for sure – but not at the moment.”

For the time being, Hayes is hopeful Nervous Witness remains in Class 2 with another 1000-metre test in the offing at Happy Valley on April 27.

“When I looked at his trials in Australia, he looked like a 1200-metre horse but just the way the programme has been, we’ve kept him to 1000 metres but he’s an aggressive horse in a stressful environment, so keeping him short for a while has been very, very good,” Hayes said.

Tony Cruz predicts unbeaten Buzzinga (All Too Hard) will continue a sharp ascent after overcoming waywardness to land the Class 3 Ngong Ping Handicap (1200m) under Karis Teetan, lugging 130 pounds in the process.

“I’m very happy with his performance today. He’s totally lost out there, all the jockeys say he’s green and an inexperienced horse. There’s a lot of improvement to come yet,” Cruz said of the gelding who won his only start in Australia last year as Hardtoexplain for Richard and Chantelle Jolly.

“We were a little bit disappointed in his first run but he came today and showed us what we thought of him originally – he’s a very nice horse. To actually do what he did today, they’ve got to be a little bit special,” Millard said.

Matthew Chadwick extended his lead in the Tony Cruz Award – given to the best-performing local rider – with victory aboard Daily Charm (Not A Single Doubt) for Danny Shum in the Class 5 Yi O Handicap (1800m). Chadwick boosted his tally to 36 wins, two more than Vincent Ho (34).

Douglas Whyte lauded Lyle Hewitson’s ride on Natural Gold (Pins) after victory in the first section of the Class 4 Tong Fuk Handicap (1400m), the fifth win in tandem for the season by the South African duo.

“The winning move was that he took initiative to roll forward and the horse got into a very comfortable rhythm, pricked his ears and didn’t spend an ounce of energy out in front. A very tactical ride, a clever ride – he made it look easy in the end,” Whyte said of Hewitson.

Peter Ho and Teetan, who shared riding honours with Moreira, struck with My Intelligent (Holy Roman Emperor) in the second section of the Class 4 Tong Fuk Handicap (1400m).