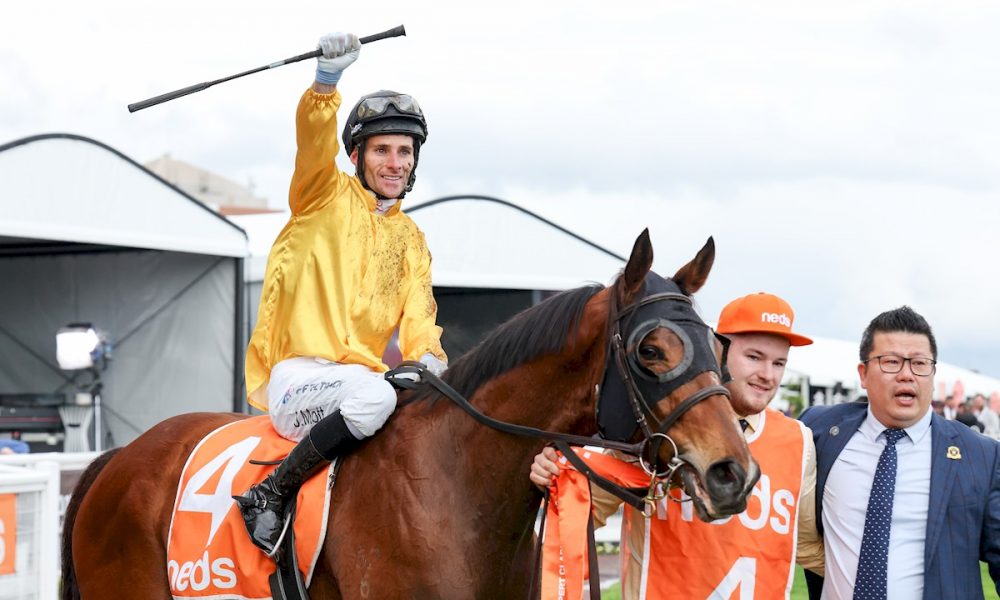 Jamie Mott. You’d liken him to Steven Arnold. Too tall, too big and too decent a bloke to be successful in the sometimes cut-throat world of race riding.

Hungry – literally and metaphorically – Mott has mastered the extraordinary self-discipline required to defy his size, just as the recently retired Arnold did throughout a distinguished career.

Mott, 34, of course won his first Group 1 race aboard Callsign Mav last Saturday at Caulfield, which was the venue of Arnold’s breakthrough top level win aboard All Time High (2000 Thousand Guineas) for trainer Russell Cameron. Cameron was soon to play a pivotal role in shaping Mott’s career.

And now that he’s a Group 1 winning flat jockey – and given their similar stature – we might even dare liken Mott to Christophe Soumillon, as each has also won a major jumps race. In Mott’s case, the Australian Hurdle among 14 jumps wins, while Soumillon won the French Champion Hurdle at his second ride over the jumps.

We cannot liken Mott to Stephen Baster as they’re physical opposites, but Baster – now working in real estate with Marshall White on the Mornington Peninsula – is a part–owner of Callsign Mav and few were more delighted than him to see his former rival claim a Group 1.

“The biggest buzz for me on Saturday was having Motty win the race. I was thrilled for him. As a former jockey, you know the torture he puts himself through to manage his weight. He’s not only the only one, but it’s a hell of a job for him.

“When the horse joined Danny O’Brien, after coming over from John Bary in New Zealand, there was a lot of discussion among the owners as to who would best suit the horse and we all agreed it would be Jamie and now the rest is history,” said Baster, whose first Group 1 win was also at Caulfield aboard Mookta in the 1993 Oakleigh Plate.

Callsign Mav is trained by Danny O’Brien to whom Mott was apprenticed as a 16-year-old. “If Jamie was four or five kilos lighter, he’d be a top-three metropolitan jockey,” O’Brien said after Saturday’s win.

O’Brien and Cameron, at Flemington, were the major influences early in his career aside from his immediate family; parents and grandparents Daryl, Des, Janet and Donna riding and training. And it was at Cameron’s stable that he met his Irish– born wife Carole-Anne.

More recently, aside from the support of several leading trainers, the linchpin of his success has been his association with Mornington trainer John McArdle.

“Absolutely outstanding,” McArdle said of Saturday’s win, “that’s as happy as I’ve ever been with the result of a race where I didn’t win.

“Really, it’s the most deserved win I’ve ever seen. He works so hard at his craft and he’s a great bloke. Probably too nice a bloke, but there you go.

“It was pretty simple for me when he started to come down to Mornington four or five years ago. He’s a very good horseman and a very good jockey. I said to him ‘come and ride for us and I’ll put you on whenever I can’. Now he’s a very big part of our team.”

Mott’s road has had its share of speed humps from quitting his apprenticeship at one point, to a recreational drug use ban, from the rigours of extreme diet and exercise and daily ice baths, to the ever-present danger of race falls.

It was just three years ago that he was wheelchair-bound after sustaining fractures to both legs, including a tibia that was literally smashed as he puts it, in a fall at Cranbourne.

With Lofty Strike now given the provisional all-clear to resume racing; Callsign Mav bound for the Toorak Handicap, and his two Flemington Sunday winners Port Phillip and Elkington Road looking to have abundant promise, there may be more fruit to be picked this spring.

Vlad Duric did likewise on Bon Hoffa in 2007 while, most notably, the first of Damien Oliver’s 123 Group 1 wins came aboard Submariner in the Caulfield race in 1990.