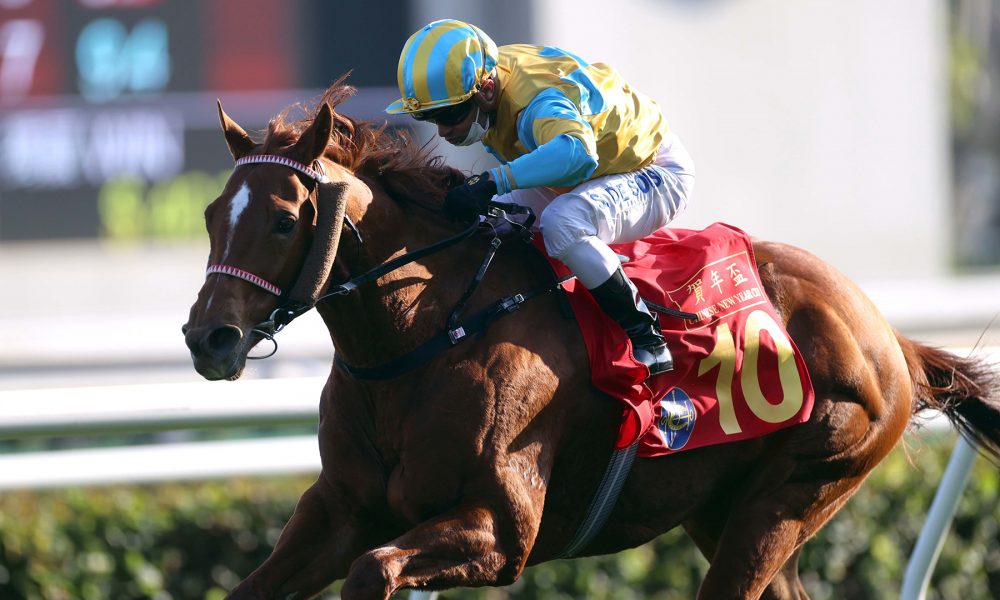 Carrying only 115lb for the three-time UK flat champion jockey De Sousa, Ricky Yiu’s tenacious import staved off The Golden Scenery (Deep Field) and Beluga (Tavistock) to register his second Hong Kong win this season after a four-year-old campaign which promised much but failed to deliver victory.

Placed three times at the end of last campaign after finishing 12th behind Romantic Warrior (Acclamation) in the 2022 Hong Kong Derby, Mr Ascendency has flourished this season with two wins and two placings from six starts and improved again to snare the programme feature on a sparkling day which attracted turnover of HK$2.06 million (approx. AU$374,930), the highest since 1997, and an overall attendance of 84,394.

“The weight helped a lot, the second horse [The Golden Scenery] gave us a lot of weight,” Yiu said. “And with Silvestre coming from England, this is an English horse and he [De Sousa] knows what they are like and he knows this horse. They are tough horses, they keep trying very hard.

“He acclimatised quite quickly. I would think he can win again provided he’s not carrying too much weight. Somewhere in the middle of Class 2, he should be able to perform again, especially the way he finished today.”

A dual winner in England for John & Thady Gosden before export, Mr Ascendency collected a HK$1 million (approx. AU$182,000) Top Up Bonus, having already earned a HK$1 million PP Bonus for his first-up victory on September 18 – also over the same course and distance – to take his prize-money earnings to almost HK$7 million (approx. AU$1.27 million).

De Sousa, who is third in the Hong Kong jockeys’ championship with 32 wins so far this term, said: “He’s a nice horse with a nice handicap, all the credit to the horse. He’s come out and won, pushing the horses with the top weight. He’s an improving horse, he’s still got a bit to learn. I do like the horse and I think later on, we’ll see the best of him.”

Frankie Lor will plot a path towards the Hong Kong Derby on March 19 with Majestic Colour (So You Think) after the gelding’s success in the Class 3 Good Fortune Handicap (1400m) under Derek Leung – and Chris So is likely to follow the same course with Super Sunny Sing (Nicconi) following his win in the Class 3 Great Profits Handicap (1600m).

“We might skip the Hong Kong Classic Cup,” Lor said, fearing Majestic Colour’s rating might not be high enough. “I will speak to the owners and we might go to other races to try and get his rating up for the Derby.”

So is similarly placed with Super Sunny Sing, who bolted in under Vincent Ho in the last race of the day.

“We will aim for the Derby,” So said. “We decided to run in this race, test him for the 1600 metres and see if we can get into the Hong Kong Classic Cup and the Hong Kong Derby. I didn’t expect him to win by three lengths, but he keeps on improving.”

Danny Shum believes he has found the key to Victor The Winner after the Toronado (High Chaparral) gelding blitzed his opposition by four lengths to clinch the Class 3 Fat Choi Handicap (1200m) under Hugh Bowman.

John Size snared another piece of Hong Kong history with his 1,100th win at Sha Tin when Zac Purton teamed with Baby Crystal (Per Incanto) to post the first victory of the Year of the Rabbit in the second section of the Class 4 Kung Hei Handicap (1200m).

“It’s not too often you see horses come from last with the big weight and a wide draw and get it done twice in a row. Full credit to the horse, he’s really matured now and he’s very relaxed in the paddock. His manner is taking him a long way and I’m really happy to see him do that,” Hall said.

“When he goes down in weight and up in competition, I think he’s going to be very hard to beat again.”

Bowman, who has committed to stay until the end of the current season, has teamed with Hall in six of his 18 wins so far.

“It’s just fallen into place,” Hall said of the partnership. “Obviously, I’ve had a connection with him over the years and every time he’s come up here he’s had a ride for me. We know him pretty well and he’s not a bad one to team up with.”

Michael Chang’s patience was repaid when solidly-backed Smart Folks (War Front) broke through at his 36th start, clinching the Class 5 Red Packet Handicap (1400m) under a clever ride from Luke Ferraris, who has 13 wins for the season.

“He’s been knocking on the door for a while, as have I for the past two or three meetings,” Ferraris said. “It’s a win in Class 5 but it still feels good and well done to Michael and his team.”

Man jubilated in a race-to-race double when Go Go Sixteen (Per Incanto) demolished his rivals in the Class 5 Yue Yee Handicap (1800m), triumphing by four lengths under Karis Teetan.