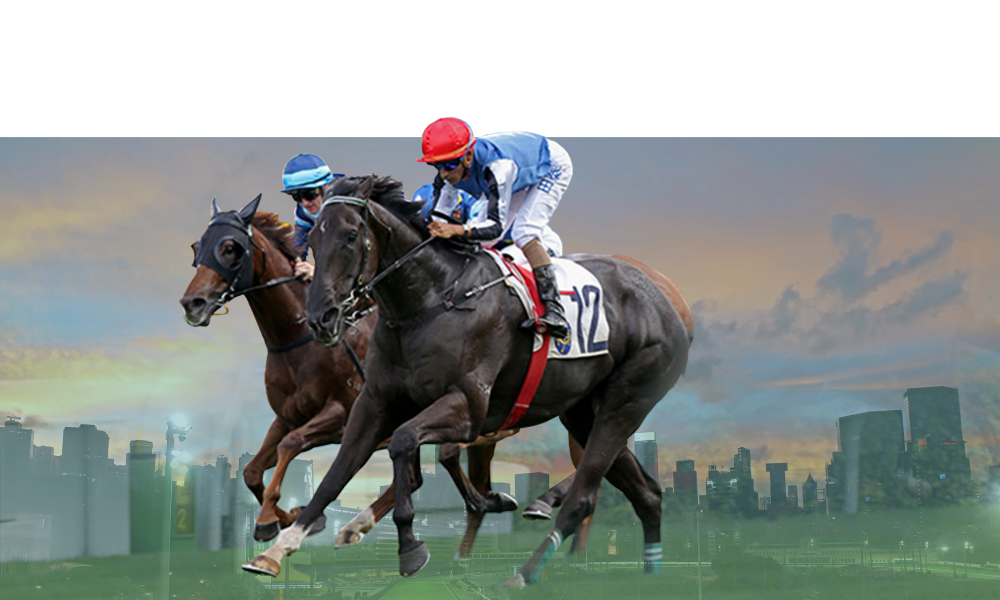 To call a horse Simply The Best (Warhead) is to play games with fate. The late Fahd Salman learnt that truth in the 1990s with a colt he named The King (Lomond), being a half-brother to his excellent European champion Generous (Caerleon): The King never made the races, let alone challenged for any crown. Simply The Best did race, once, at Sha Tin, and his performance defied the very notion of fate.

The Danny Shum-trained galloper hammered his 13 rivals on that September afternoon in 2019, rolling along on the front end under Joao Moreira before quickening impressively. His acceleration took him through the final 400 metres of the 1200 in 22.23 seconds and opened a gap of five-and-a-quarter lengths on the runner-up, Sky Darci (Darci Brahma), who clocked 22.37 seconds through a deep run.

Sky Darci would go on to win the 2021 Hong Kong Derby (Listed, 2000m) and on Sunday he will challenge Golden Sixty’s (Medaglia D’Oro) pre-eminence in the Hong Kong Mile (Gr 1, 1600m), in against the Japanese heavyweight Danon Kingly (Deep Impact) and Ballydoyle’s Classic heroine Mother Earth (Zoffany). Simply The Best never raced again, a bad bout of colic being fate’s revenge for such audacious nomenclature about a horse sired by a stallion with no commercial value and whose full-siblings Dixyville (Warhead) and Jarhead (Warhead) did their winning around Wyong, Gold Coast, Ilfracombe and Longreach.

Fate sometimes has a way of circling back, though. Until last May, Simply The Best was the only horse by his sire to have raced in Hong Kong, and, given that Warhead (Viscount) would rank somewhere between permed mullets and patchwork denim in the ‘How fashionable?’ ratings, he could well have been the last.

But along came Naboo Attack (Warhead), unleashed by David Hayes last May to win a Class 2 handicap at his first Hong Kong start. The strapping, 17 hands gelding, who weighs in at over 1360lb, had found his way to Sha Tin through five wins from seven starts in Queensland for his breeder and initial owner/trainer Steve Tregea, when named Command ‘N’ Conquer. On Sunday he will become his sire’s first Group 1 runner when he lines up in the Hong Kong Sprint (Gr 1, 1200m).

Warhead was a talented racehorse for Gerald Ryan but a bone cyst in a front fetlock limited him to just two starts as a juvenile – both top-four placings in Group races – and a further three outings in his curtailed four-year-old season. He stands in the rural Sunshine Coast hinterland, at Stan Johnston’s Craiglea Stud, a far cry from showy Sha Tin and the Hong Kong Jockey Club’s wish list profiling of the Hong Kong International Races as stallion-making races.

Johnston does not advertise Warhead – he belongs to Les Cowell who raced him with partners – and there is no fee listed. “We don’t breed for the sales, we have our own track here and we just breed them to train them,” said Johnston.

The 17-year-old stallion has sired only 111 starters and one stakes winner from a low-key stud career that began in 2009, and yet his tally of 61 individual winners of 209 races equates to a winning rate of 55 per cent winners to runners. Not that Johnston worries over any of that.

“He’s not commercial and if they’re not, you don’t get very far. We mainly use him ourselves and Steve Tregea has used him and got that good horse, Command ‘N’ Conquer. I’ve got three or four stallions here but we don’t run it as a commercial operation. If people want to put their stallion here that’s alright but we don’t advertise them or anything like that, that’s up to their owners: we also have Citiwyse and Agitate here,” continued the 72-year-old, whose racehorses are trained by his daughter Kristel Johnston.

“Warhead’s been terrific for us. He elevated our stock to city standard and black type racing, with yearlings that would have made $1,000. We’re very low-key breeders, we just breed to run in the provincials mainly, but we started getting horses with him like Executed who won a Listed race and Craiglea Wandoo, he was fourth in a Group 3. He took us straight to black type.”

Tregea, who bred, trained and retains an ownership share in this season’s triple Group 1 winner Incentivise (Shamus Award), has a clear idea of Warhead’s value to what he is trying to achieve with his Windemere Stud operation. There was no thought of a sale ring when he sent his well-related but unraced mare Commanding Queen (Commands) for a covering.

“It was a highly compatible theoretical mating,” Tregea said. “Conformationally, Warhead suited the mare, in my mind. We were and still are breeding horses to race only, so the commerciality wasn’t a factor. I’m not a pedigree buff by any stretch but the big thing that stood out about it to me was Easy Date is the third dam of the mother and Warhead was out of a Snippets mare and Snippets is out of Easy Date, so the horse was going to be line-bred to Easy Date and she’s a potent mare.”

The blue hen Easy Date (Grand Chaudiere) produced not only the Group 1-winning champion and sire Snippets but also the Group 2 winner Quick Score (Pag-Asa), while her many successful descendants include the Group 1 winners King’s Legacy (Redoute’s Choice), Oohood (I Am Invincible), Ertijaal (Hard Spun), Rewaaya (Singspiel), Sense Of Occasion (Street Sense) and Forensics (Flying Spur), who won the Golden Slipper (Gr 1, 1200m) after defeating none other than the debuting Warhead into second in the Kindergarten Stakes (Gr 3, 1100m).

“We ended up with just another nice yearling and he ended up a good horse, some of them don’t but Naboo Attack did,” Tregea continued. “The effort was to breed a nice horse not to sell, which is a different proposition altogether to breeding one to sell that might look a bit flash. He certainly wouldn’t have made any money as a yearling because he was big and plain.”

Naboo Attack was scouted by Hayes’ Lindsay Park operation and renamed by current owner Cheung Yeuk Lee for Queen Amidala’s home planet of Naboo in George Lucas’s Star Wars universe. The five-year-old charged down the outside to finish second under Zac Purton last month in the Jockey Club Sprint (Gr 2, 1200m) behind Lucky Patch (El Roca). Purton has jumped ship to the winner, with Hayes handing back the reins to Karis Teetan.

The Mauritian, who will also ride Hong Kong’s champion stayer Panfield (Lookin At Lucky) in the Hong Kong Cup (Gr 1, 2000m), as well as Columbus County (Redwood) in the Hong Kong Vase (Gr 1, 2400m) and Japan’s Vin De Garde (Deep Impact) in the Mile, was passed fit to ride on Monday, having taken extra time following a suspension to allow further healing to the shoulder he injured in a race fall in October.

“It was a little fracture in the rotating bone where the shoulder joins,” Teetan said. “You don’t even use it but there was just some pain there and it was getting inflamed after the races. I’ve had physio every day and then just been resting.

“Naboo Attack showed last time that he has class. He’s a massive horse and when you ride him there is so much underneath you but once he gets into that big, galloping rhythm, you can feel the engine warm up.”

Connections are believed to be considering applying blinkers to the gelding, who tends to race at the tail and could well step out to 1400 metres and a mile in the new year.

Should Naboo Attack lift himself above his fellow Hong Kong sprinters and also succeed in fending off Japan’s trio of defending champion Danon Smash (Deep Impact), rising star Pixie Knight (Maurice) and Resistencia (Deep Impact), he would follow in the footsteps of another horse with Craiglea roots.

“We bred Falvelon, we took his dam down to the stallion, but he was bred and reared here,” said Johnston, recalling the two-time Hong Kong Sprint winner. “We also bred the first Golden Slipper winner Queensland had, Calaway Gal, and we’ve still got her mother here, Calais Royale, she’s an old grey mare now, about 30 years old. They’re all bits of flukes, the good ones we have, because we don’t have the breeding. If we took ours to a sale, they’d only bring three or four thousand.”

There is not much fluke about Warhead though. He has proven, with limited opportunities, that he is capable of not only getting winners but also upgrading stock. Tregea’s patronage has shown that when he gets a mare with quality blood, he can produce the goods.

But right at the time when Warhead has produced a son good enough to race at a level which injury prevented him from reaching, fate has thrown in another twist.

“He might be becoming infertile,” Johnston added. “He only covered five mares, this year, Steve sent one of his, but we didn’t get one in foal. It might be that he just had a virus, we’ll see. He’s still keen, so we hope he can be back on it next year but really, it’s no big deal for us if he isn’t. He’s happy in the paddock on his own and he loves every bit of it.”

Meanwhile, Shum hasn’t given up on Simply The Best. The five-year-old is now with trainer Tim Carter in New Zealand. “He’s done a lot of therapy and laser treatment, we’re trying to give him a chance,” Shum revealed. “Tim’s been positive: I’m leaving it to his magic hands to see what he can do.”