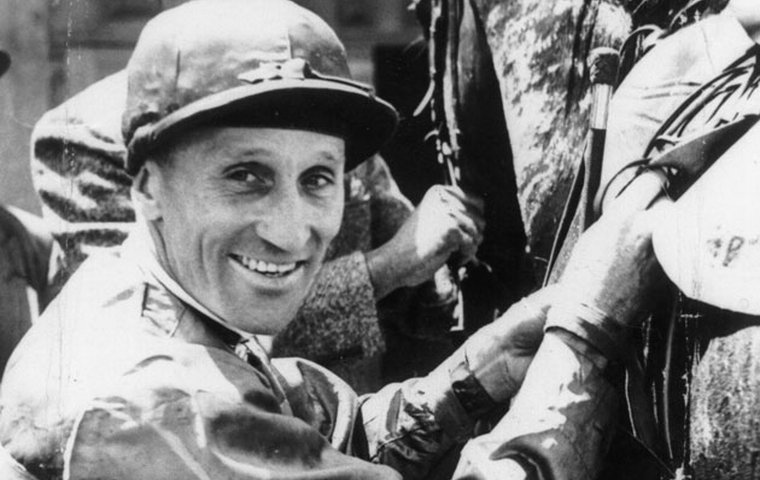 Tragically killed in a race fall at Maisons-Laffite

It is appropriate in the midst of the spring carnival to acknowledge the deeds of Neville Francis Sellwood (1922-1962), who with eight wins boasts the best Caulfield – Melbourne Cup and Cox Plate record among our ‘Incomparables’ – the Australian jockeys who had sustained and remarkable success in England, Ireland and France from the 1900s to 1970s.

His international record was not as distinguished as many of his contemporaries but his career was tragically cut short and he is one of only five Australian jockeys to have won an Epsom Derby and his record, at home, was as good as any.

He won the first Golden Slipper Stakes, in 1957, aboard Todman (Star Kingdom) and rode the champion Tulloch (Khorassan) in 12 wins including in the memorable Caulfield Cup of the same year. Five Victoria Derby and four Epsom Handicap wins top the list of at least nine major Australian races he won more than once.

He won six jockeys’ premierships in Sydney from 1949 to 1960 –  the first coming just two years after he moved from Brisbane – before making the fateful decision to try his hand overseas for an extended period of time.

It was not his first trip abroad. In 1950, he ventured to America at the behest of well known comedian Joe E Brown. He rode just one winner, from limited opportunities, in California in a two months cameo.

“Sellwood made a great impression in California,” Brown said at the time. “They didn’t give him any ‘live’ horses because they knew he wasn’t going to stay.”

He then went to England, in February 1951, and blazed a trail which would be well worn. He won the King’s Stand Stakes on Stephen Paul and the Diamond Jubilee (then Cork And Orrey) Stakes on Bob Cherry – both trained by Atty Persse.

He also won the Royal Hunt Cup and Bessborough Stakes (now Duke Of Edinburgh) to be the leading rider at the Royal meeting.

Sellwood would win the King’s Stand again, this time for Vincent O’Brien, in 1962 – a race Scobie Breasley would win four times before, some 50 years later, Jay Ford, Craig Newitt, Steven Arnold and Zac Purton added their names to that honour roll.

Sellwood returned to Australia in September 1951. In that month, the Daily Mirror carried this report: “Australian jockeys Edgar Britt, Billy Evans, Jack Brace, Billy Cook, Tommy Burn, Neville Sellwood, Scobie Breasley and Ted Fordyce have between them ridden nearly 1,500 winners in England since the war. Edgar Britt is responsible for practically half the total.” Sellwood, that year, contributed 29 of them.

He was home in time to win the Melbourne Cup for the first time and the Caulfield Cup a second time, having won it in 1950, just before his departure.

Eleven years later, Sellwood was feted far and wide after winning an extraordinary Derby – in which seven horses fell – on Larkspur for O’Brien.

“The Derby was turned into a minor Grand National today when seven of the 26 runners fell and one of them, King Canute H, had to be destroyed. The greatest disaster in the history of the race occurred at Tattenham Corner when a large number of horses were involved in a melee. Among those who fell was the favourite, Hethersett (9-2). The race was won by Vincent O’Brien’s Irish trained Larkspur (22-1), who came home two lengths in front of the French colt Arcor, with another French horse, Le ContiHien, in third place,” the Telegraph reported.

It went on to describe Sellwood as ‘the luckiest man on the course”.

“The horses fell right in front of me,” Sellwood told reporters, “I had a wonderful escape. I was nearly brought down, but I got through. I knew I would win early in the straight.”

Tragically, luck was not on his side just five months later at Maisons-Laffite in France. The Birmingham Post reported:

“The Australian jockey Neville Sellwood was killed when his mount, Lucky Seven stumbled and fell on him during the sixth race at Maisons-Laffite yesterday. Officials said that Sellwood was dead on arrival at the jockeys’ hospital on the course.”

Sellwood, earlier that year, had become the first jockey to win in both France and England on the same day, scoring at Saint Cloud in the afternoon and then flying over to win at Kempton Park

Newspapers, at the time, universally described him as intelligent and charming and that his “tragic death would be deeply regretted by all those who had the pleasure of being associated with him.”

Yves St-Martin, 15 times champion jockey of France, went on to claim the title that year but later presented the cravache d’or (golden whip) to Sellwood’s family.

Sellwood had been comfortably leading the championship and while Saint-Martin had already been presented with the trophy, he conceded he would not have won had Sellwood had not been killed.”I do not deserve the award and I will pass on the ‘Golden Whip’ to Neville’s widow,” Saint-Martin said.

“Yves St-Martin refused to accept the golden whip award for his success, and instead presented it to our boy, John, aged seven. He has done John a wonderful favour by letting him have the whip,” said Sellwood’s widow Alwyn.

It’s believed that Sellwood had intended to return to Australia before that Maisons-Laffite meeting in order to ride in the Melbourne Cup but changed his mind “to clinch” the French premiership.

His funeral was held in December 1962. “Thousands of Orange people,” it was reported, “waited for more than an hour to pay their respects to former champion jockey Neville Sellwood as his funeral moved slowly through the town today. Six Orange jockeys formed a guard of honour alongside the hearse, which travelled directly to Orange from the Requiem Mass at the Sacred Heart Church in Randwick, Sydney.

“The funeral procession proceeded to the small town of Cudal, 23 miles from Orange, where Sellwood owned a property.”

Earlier that month Alwyn Sellwood had honoured a promise made by her husband to give a lightweight Australian saddle to that year’s Arc de Triomphe winning jockey, Marcel Depalmas who had been his neighbour in the jockeys’ room at Longchamp.

“Apprehensive about the financial and physical risks involved in a career in horse-racing, Neville’s mother wanted him to become a solicitor, but he deliberately performed poorly at school in an attempt to thwart her ambitions for his future,” Waterhouse wrote.

Warwick Hobson, in The Story of The Golden Slipper Stakes, provides more background to his racing connection.

“Sellwood was born in the Brisbane racing suburb of Ascot (adjacent to Eagle Farm and Doomben racecourse) and was born to be a jockey. His father Charlie was a retired jockey while his mother was an accomplished horsewoman. Often after school, he could be found across the road at the stables of Barney Page who was the private trainer to leading Brisbane owner P.J. O’Shea.”

Sellwood’s father was also regularly described as a “well known trainer” in newspapers at the time.

In 1938 he was apprenticed to Jim Shean, a trainer in Brisbane. His first ride was at Bundamba racecourse, Ipswich in October 1938 and his first winner – Ourimbah, at Doomben – came 15 rides and five months later on 11 March 1939. Maurice Cavanough, in the Melbourne Cup, wrote that Sellwood “in his early days had almost as many falls as he had winners”.

Sellwood, from early in 1942, served with Army postal units in Brisbane and at Townsville where “an apparently sympathetic” commanding officer allowed him to ride trackwork and take mounts at local race-meetings.

“He topped the jockeys’ premiership at Townsville in three successive years, winning 140 races from 290 mounts. Rather than calling different odds for each horse he rode, the bookmakers laid ‘even-money Sellwood’ for them all. At St James’s Anglican Cathedral, Townsville, on 21 October 1944 he married Alwyn Grace Dinnar, a waitress; they were to have two daughters and a son,” Waterhouse wrote.

He was discharged from the army in May 1946, and by then was already among Brisbane’s leading riders. He was lured to Sydney by leading trainer Maurice McCarten after his stable jockey Ted Bartle retired and despite an early run of “cold form” he would soon be Sydney’s premier jockey – for the first time in 1948-49.

In 1949, he won the Derby and the W. S. Cox Plate on the McCarten trained Delta, whom he would partner to win the Melbourne Cup in 1951.

It’s often been written that Delta’s owner Sir Adolph Basser gave Sellwood a Rolls-Royce but Basser, described as Australia’s greatest philanthropist after he died in Sydney in 1964, denied this in newspaper reports at the time.

Ironically, Cavanough reported that New Zealand jockey Larry Wiggins had been offered the first prizemoney had his mount Akbar, beaten three quarters of a length, won.

Sellwood’s second Melbourne Cup win was on Toparoa in 1955. Rising Fast, with 63.5 kilograms, was beaten a length in that Cup by Toparoa who had 15.5 kilograms less and Sellwood was suspended for two months for causing interference to Rising Fast. No protest was lodged.

Form focus credits Sellwood with 74 Group 1 wins – tenth overall among Australian jockeys and third behind only George Moore (104) and Roy Higgins (90) among the jockeys of his era (when there were fewer Group 1 races).

Sellwood, inducted into Racing and Sport Australia’s Hall of Fame, was described by Jockeypedia as “a quiet, friendly person who was a good loser and a modest winner, likeable qualities which are not always evident in front-ranking jockeys.”