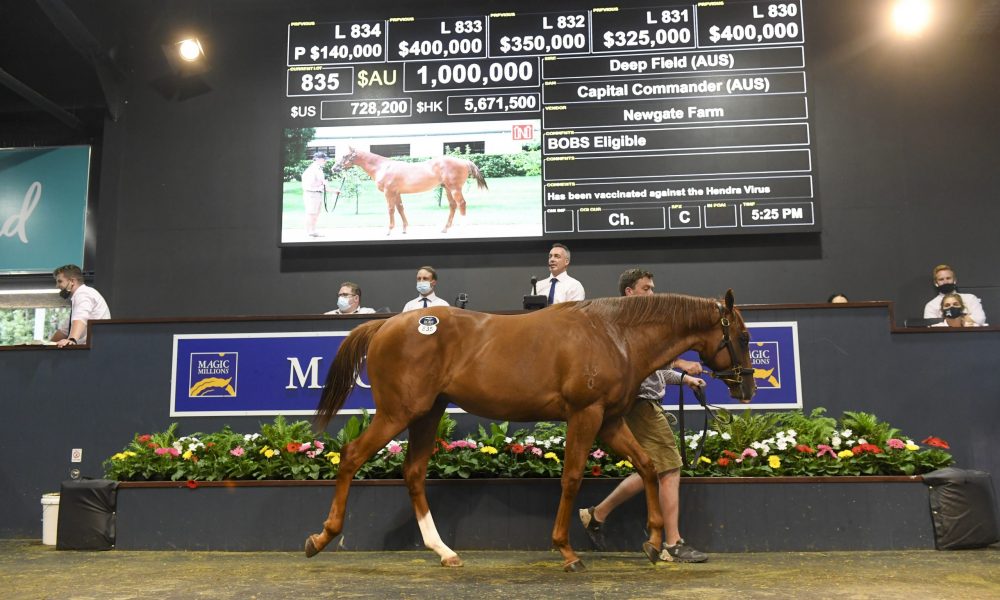 Demand for horseflesh showed no signs of slowing on day four of the season-opening Magic Millions yearling sale extravaganza, in which a new milestone was set for a proven young stallion and one of the industry’s most progressive stud farms moved closer to a maiden leading vendor title at the Gold Coast.

Three seven-figure yearlings changed hands at the raceday eve session: a daughter of I Am Invincible (Invincible Spirit) for $1.1 million to James Harron; a Pierro (Lonhro) colt for $1 million to Tom Magnier and a colt by Deep Field (Northern Meteor) hit the same mark, the sire’s first to hit the benchmark.

The trainers of Deep Field himself, Michael, Wayne and John Hawkes, were behind the breakthrough purchase of the colt, as the biggest sale in Magic Millions history continued at a relentless pace.

With tonight’s final Book 1 session of 93 lots still to go under the hammer, Magic Millions has sold 15 million-dollar yearlings, three more than the company’s previous best of 12 in 2021, and the sale aggregate reached $205,847,500, almost $26 million more than at the same stage of last year’s then record-breaking sale.

After four days of trade, the average of $294,080 fell from Thursday’s peak of $298,668 and the median held firm at $230,000 as any expectant lull in the market was quickly dismissed after buyers clamoured for yearlings, which has seen the clearance rate at 93 per cent.

“Any sale that vendors can come and sell 9.3 of ten horses they have in a sale is incredible. I’ve had sale companies all over the world texting me saying this is amazing, it’s sensational,” Magic Millions managing director Barry Bowditch said last night.

“Our dream is to get to a clearance rate with a nine at the front of it at the end of the sale, and we’ve been there since the start.

“The thirst for horses here in Australia has never been stronger than it is at Magic Millions, January 2022.”

The first million-dollar lot sold yesterday was a Segenhoe Stud-raised I Am Invincible filly, the stallion’s fifth yearling to hit the magical mark this week, who was bought by agent Harron on behalf of a long-time client.

She was immediately on the market after she drew a $500,000 opening bid and, despite some stalling, the competition from the buying bench heated up before Harron landed the knockout punch, as he has on so many occasions in the past, at $1.1 million.

When Harron puts his hand up for a yearling, you can be assured that the due diligence has been done and nothing left to chance, so when he says there is “quite a lot happening” in the family of the I Am Invincible filly, it is worth paying attention.

“We like to handpick a few of these special fillies throughout the year if we can,” Harron said.

“She was a standout, an absolutely beautiful filly, with a fantastic pedigree. There’s quite a lot happening in the family, actually, and she was just a lovely filly by a stallion doing a fantastic job with all his progeny but is very good with his fillies.”

Catalogued as Lot 669, she is the second foal out of breeder John Camilleri’s Reisling Stakes (Gr 2, 1200m) placegetter Villa Carlotta (Street Cry), who is a half-sister to the stakes-placed Fasano (Lonhro), while her second dam is Group 3 winner Florentina (Redoute’s Choice).

Florentina has a two-year-old colt by Kingman (Invincible Spirit) who made $1.8 million at last year’s Magic Millions sale and forms part of Coolmore’s colts partnership, while the valuable filly’s dam, Villa Carlotta, has produced a two-year-old colt by Merchant Navy (Fastnet Rock). She was covered last September by Wootton Bassett (Iffraaj).

“John (Camilleri) has been a terrific breeder, one of the best breeders in Australia, and Segenhoe is one of the best-producing farms, so hopefully we can have a bit of luck,” the agent reasoned.

The million dollar, Newgate-consigned Pierro colt, offered as Lot 798, was Coolmore’s fourth seven-figure purchase of the sale, having also taken home the current sales topper in the $1.9 million I Am Invincible colt and sons of Snitzel (Redoute’s Choice) and Not A Single Doubt (Redoute’s Choice) for $1.1 million each, all on Thursday.

The Pierro yearling, a half-brother to the Jamie Richards-trained unbeaten three-year-old Mohawk Brave (Extreme Choice), is the third foal out of US Grade 3 winner Ben’s Duchess, a Munnings (Speightstown) mare bought at the 2016 Keeneland November Breeding Stock Sale for US$350,000.

“Again, Chris (Waller) and the whole team liked this horse a lot. Obviously, Munnings (the colt’s dam sire) needs no introduction; it’s a very good page and it was the type that got us,” Magnier said.

“Pierro is a stallion who is just going from strength to strength and he is a champion sire in the making.”

The Coolmore-organised colts partnership, which has already hit the jackpot with Group 1 winner Home Affairs (I Am Invincible), send all their horses to Waller to be trained but they will first be broken-in at their Jerrys Plains property.

“We’ve got a few nice colts this week and fingers crossed (they can gallop). They’ll all head back to the farm at the gym there and start breaking them in next week,” Magnier said.

Team Hawkes has never been afraid to back their judgment on a high-priced yearling but, even so, they had to ward off buyers from all sides to ensure a Newgate Farm-consigned colt by the stud’s stallion Deep Field joined their dual-state stable.

Armed in the knowledge of the talent of his elder half-brother, the Alan Bell-raced Clemenceau (Capitalist), who made it a hat-trick of wins by scoring at Flemington on New Year’s Day, only added to their conviction.

When the imposing son of Deep Field walked into the ring, Wayne and brother Michael, along with father John Hawkes, were not going home without a fight for Lot 835, even if he did cost the trio $1 million.

His price-tag betters Deep Field’s previous high of $800,000, achieved twice to date. The first occurred at the 2020 Magic Millions sale and was matched earlier this week by the Matthew Sandblom-bred and Newgate-consigned first foal out of Group 1 winner I Am A Star (I Am Invincible).

“He certainly wasn’t cheap, but when you come to a yearling sale, what you want and what you go home with quite often doesn’t happen,” Wayne Hawkes said.

“When you get the horse that you wanted, it’s what it’s all about.”

The prized colt will race in the grey and red diagonal stripe colours adorned by the riders of the horses owned by Bell, who also raced Deep Field.

“He’s the son of Deep Field and Alan (Bell) always tries to buy the best Deep Field he can and he thought he was the best one he’d seen,” Hawkes said.

“We’ve got the half-brother Clemenceau, who won up the straight at Flemington on New Year’s Day, so we just loved the horse when we saw him.

“Quite often half-brothers and half-sisters don’t look the same as the one at home. When they look as good or better, obviously you’re a bit keen on them.”

Bred by S F Bloodstock, Sandblom and WinStar Farm, the million-dollar Deep Field colt is the fourth living foal out of Capital Commander (Commands), a Listed-placed mare bought in foal to I Am Invincible by the partnership in 2017 for $460,000 from the Magic Millions National Broodmare Sale.

Capital Commander has a colt at foot by Deep Field, who stood for a career-high fee of $88,000 (inc GST) in 2021, and she was covered by the same stallion last year.

Newgate Farm is currently the leading vendor by aggregate, a title it is certain to hold at the conclusion of the Book 1 sale, having already sold 41 yearlings for a total of $17 million and at an average of $414,634.

Bowditch paid tribute to Newgate Farm’s leadership group for the results the Henry Field-led operation has been able to achieve this week.

“I believe, already, they’re at $17 million on the dollar and I believe that’s the highest aggregate of any vendor at this sale ever, and they’ve got (tonight) to go,” the managing director said.

“It’s an outstanding job from the team, from Henry and Louise Field, to Matthew Sandblom, to Gavin Murphy, who all invest in the farm so heavily, and the team Henry’s got in behind him; Jim Carey the figurehead there.

“They’re an outstanding group of people who have put a lot of time and investment into the game. They’re not only our leading vendor, they’re one of our leading buyers as well, with the China Horse Club. They’re a huge component of the success of this sale.

“This has been a plan since the winter to ensure they had their quality horses here and our team is thrilled to be able to achieve these results for Henry.”