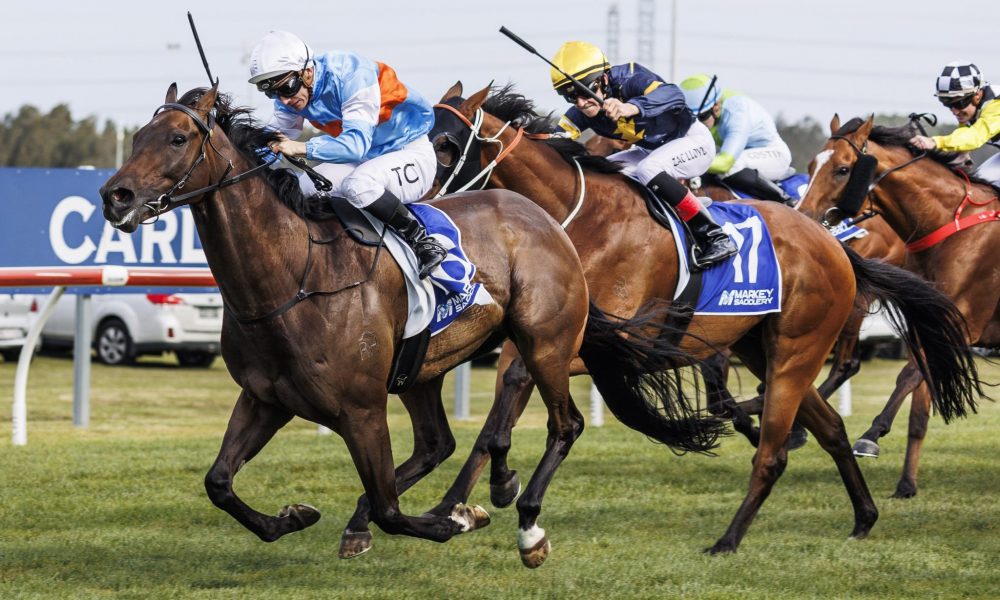 Glowing from a successful Ready to Run Sale, the next focus for the New Zealand bloodstock industry is the annual Karaka yearling sales, set for late January and early February and the Kiwis have wasted no time in adding to an already first class spring.

That glow is burning bright at Rich Hill Stud whose Proisir (Choisir) is running hot, capping a fabulous two weeks which saw the stallion sire two New Zealand Classic winners (Pier and Legarto) then claim Saturday’s $1 million The Gong at Kembla Grange when Riodini completed the 1600 metres in a very sharp 1:33.57.

Caught three and four wide, plus copping a solid bump as they lined up for the run home, Riodini was tough the length of the straight and deserved the $580,000 prize.

His sire Proisir is on fire in New Zealand and on the 2022-23 NZ Sire Premiership has surged to a $700,000 lead courtesy of three Group 1 winners which, in addition to the New Zealand 2,000 and 1,000 Guineas scorers above, also includes Dark Destroyer, winner of the first Group 1 of the season, the Tarzino Trophy (1400m).

Riodini, retained by his breeders, Alan and Liz Galbraith, was one the first headline acts for Proisir, representing his first crop, and came out swinging to win by three lengths on debut at Pukekohe as a late two-year-old. Two Tauranga wins, including an easy-as-you-like four-length romp at his third start, preceded his initial attempt at stakes class in Ellerslie’s Bonecrusher Stakes (Gr 3, 1400m). A decisive length and a half victory had him unbeaten in four starts, yet that was his last win before Saturday.

He returned to Ellerslie for the Auckland Guineas (Gr 2, 1600m) but had to bow to a good one in Dragon Leap (Pierro) who would frank that form, next start, in the Avondale Guineas (Gr 2, 2100m). Riodini’s last run in New Zealand was in the Levin Classic (Gr 1, 1600m), finishing well for third behind the very good filly Travelling Light (El Roca).

Transferred to the Sydney stable of Gai Waterhouse and Adrian Bott, Riodini has since raced in only the best of company. His 18 Australian starts include five attempts at Group 1 level, five at Group 2, two at Group 3 and three Listed races. The remaining three were in the $7.5 million Golden Eagle (1500m), the $3 million Nature Strip (1300m) and, now justly rewarded, in Saturday’s The Gong.

Two of his Group 1 placings were a gritty second to Verry Elleegant (Zed) in the George Main Stakes (1600m) and third, behind Probabeel (Savabeel), in the Epsom Handicap (1600m). The Gong is his fifth win and first in Australia, banking a career $1.168 million in prize-money.

Echo Lass was bred by the late Jim Campin of Chequers Stud, Cambridge. She was a daughter of Mohave (Jim French), a mare Campin imported from the US in 1977 and well connected she certainly was, in addition to producing two stakes winners. Mohave’s dam, Mavala (Bolero), was a half-sister to the champion Damascus (Sword Dancer), their dam, Kerala (My Babu), the 1967 US Broodmare of the Year.

Damascus won 21 of his 32 starts, ran second seven times and third three times, scoring the second and third legs of the US Triple Crown, the Preakness Stakes (Gr 1, 9.5f) and the Belmont Stakes (Gr 1, 12f). Campin was clearly a fan of Damascus having imported his son Amalgam the previous year. Amalgam was the half-brother to champion mare Dahlia (Vaguely Noble).

By far the best yet by Horse of the Year and Champion Three-Year-Old, Mongolian Khan (Holy Roman Empire), Bankers Choice cruised through a heavy track to bag the Ballarat Cup (Listed, 2000m), his sixth win and second stakes, to add to his Anniversary Handicap (Gr 3, 1600m) at Trentham last January.

About Bankers Choice, ex-pat Kiwi trainer Mike Moroney stated: “He’s a very smart horse. He’s a bit quirky but he’s got real ability and it’s just been a matter of getting things right.”

The gelding drifted through the field after a good beginning and had plenty to do when rounding into the straight but accelerated quickly from the 300 metres and had the race under control from the 150 metres.

He broke his maiden when trained by Stephen Marsh at start five, then proceeded to win a further four from five. Exported to Australia in February, autumn saw him step up to the big time for three starts, including a sixth in the Doncaster Handicap (Gr 1, 1600m).

This season he has taken a little time to reach form but indicated he was close when second in Moonee Valley’s Crystal Mile (Gr 2, 1600m), followed by a solid sixth in the Champion Stakes (Gr 1, 2000m) on Flemington’s Champion’s Day.

Not only is Bankers Choice the best by his sire, he is also the best in his immediate family since Magic Flute (Adraan), a fine mare who won Caulfield’s Thousand Guineas (Gr 1, 1600m) and the 1987 Doncaster Handicap. Magic Flute and Graceful Dancer (Avaray), the fourth dam of Bankers Choice, are half-sisters.

Their dam, Ballet Dress (Without Fear) was a daughter of Tutuila (Matrice), the sister to champion two-year-old and Golden Slipper (Gr 1, 6f) winner, Pago Pago (Matrice).

Squally spring showery weather at Pukekohe was an omen for Darci La Bella (Darci Brahma), the mare comfortable on rain-affected tracks, and she gave her opponents little chance with a dominant display in the Auckland Thoroughbred Breeders’ Stakes (Gr 2, 1400m).

At start 16, of which ten are victories, the Auckland Breeders’ Stakes was her second stakes win in succession, having taken out the Taranaki Breeders’ Stakes (Gr 3, 1400m) at Hawera last month. The win took her earnings to within a whisker of $300,000.

She was away fairly to settle midfield and held her spot, two out, to the end of the back straight. Jonathan Riddell pushed her forward approaching the 600 metres and, with cover, rounded into the straight in seventh. Riddell switched inwards at the 400 metres, she accelerated nicely at the 300 metres and gathered in the leaders a 100 metres on, after which she took over easily and was simply too good, winning by two and three quarters at the post. Although rated a Heavy 9 surface, Darci La Bella’s winning time was a very respectable 1:24.55.

“I was actually pleased the track had come back a little bit as I didn’t want it too arduous,” said winning trainer Allan Sharrock. “That was pretty dominant in the end though. With the rating she has she would have been carrying 62 kilograms in a handicap so the weight-for-age scale worked well for her”.

The five-year-old will now likely head to Awapuni for the Manawatu Challenge Stakes (Gr 2, 1400m) next month.

Her dam, Bellaroof (Maroof), is doing a great job as a producer. Two years prior to foaling Darci La Bella, she foaled Tavi Mac (Tavistock), the recently retired winner of 12 races, including Darci La Bella’s next target, the Manawatu Challenge Stakes.

Another to relish the conditions was Aromatic (Sacred Falls) who broke through at start 20 for her maiden stakes success, and fourth career win, when taking out the Counties Cup (Gr 2, 2100m). As honest as they come, Aromatic has recorded ten second placings in her career so a win was due. Twice stakes-placed second in two of her last three starts, she caught punters off guard.

Craig Grylls allowed her to drop well back with a lap to run, where she remained starting the back straight, before finding herself second last leaving the back straight. She began her run from the 800 metres, went wider to be midfield rounding into the straight and sat fourth starting the run home. Third at the 300 metres, she took a narrow lead at the 200 metres then slugged it out against her stablemate, Self Obsession (Shocking), grinding out the win by a long head.

Vickezzchardonnay’s half-brother, The Mighty Finn (McGinty), also won the Counties Cup and another half-brother, Fifty Fifty (Justice Prevails), was a Listed winner, meaning that their dam, Our Rosalee (Conquistarose), the dam of eight winners, was a treasure. Our Rosalee was a half-sister to the speedy two-year-old stakes winner Miss Emma (Alvaro).

Although bred in Australia, Ethereal Star (Snitzel), easy winner of Saturday’s Challenge Stakes (Listed, 1100m) for two-year-olds, is from our own Eleanora (Makfi), the dual Group 3 winner on both sides of the Tasman.

Mostly three wide the journey, Ethereal Star was too good in claiming both her maiden win and maiden stakes win at her second start. She dwelt from the barrier but Wiremu Pinn set after the leaders when she balanced and went up three deep to sit just outside the pace. She formed a line of three starting the run home, Pinn waited until the 250 metres for an effort, she took a clear lead at the 150 metres and was in no danger after that.

A $600,000 purchase at the NZB Karaka Yearling Sale last March, Ethereal Star has already improved her value and will now be set for the Karaka Million (RL, 1200m).

Arriving at the Karaka sales complex last Monday, Kiwi Chronicles was thirty seconds into the day and the first face seen belonged to Shane Crawford, of Regal Farm.

Brief greetings took place followed by Crawford saying: “The Australians are back!”, and his comment was the first of many similar comments throughout Monday and Tuesday, before the sale kicked into gear.

So, too, were the Hong Kong-based buyers including Kiwi Jamie Richards. Both regions have been sorely missed for too long and vendors’ smiles were difficult to suppress. ANZ Bloodstock News’ Tim Rowe also commented that there were more Australians at Karaka than at the two most recent such sales in Sydney and on the Gold Coast.

By some coincidence, Crawford’s Capitalist (Written Tycoon) colt topped the sale at $625,000 on day two. The scene back at the box was a bit of a tear-jerker, where Crawford and his partner Kara were a little overcome by the result. For the smaller operation, a super result like theirs means a great deal.

Also back, from serious health issues, is popular agent and all-round character Stu Hale. In March, at the yearling sale, Hale looked a shadow of his former self and was going through a rough patch. It would be fair to say that things were not looking too flash.

The contrast between then and now is remarkable and long may it last. Hale commented that his industry friends and associates, especially Garry Chittick, have been amazing in their support. Hale is on some powerful, but expensive, drugs and is totally thankful that so many have seen to it that he gets what’s needed.

Hale also signed for a nice filly by Justify (Scat Daddy) for $210,000 from Kelly Van Dyk’s Prima Park. Great to see you back, Stu!

It was good to see NZB’s Mike Kneebone back in the auctioneer’s box. He too has had some medical issues, on top of being locked out of the country for a time. Fortunately, for NZB, he has been healthy enough to carry out inspection duties after Danny Rolston’s export to Hong Kong.

Things are getting back to normal and we are all ready for that.

The Kiwi Chronicles’ library just grew. A few years ago agent Michael Otto had nowhere to store his great collection of bound New Zealand catalogues and Timeform books. Fellow writer and agent John Richardson was similarly faced with finding a home for his extensive library due to downsizing and at the sale last week, breeder Marie Leicester posed the question, if I knew anyone who might like a run of New Zealand Turf Registers.

Courtesy of Robert Dawe and Brian de Lore, four more New Zealand Stud Books have found their way into the library too. I run a home for old bloodstock industry books and am delighted to now own many wonderful reference publications. Thanks to all. They will be treasured and used.