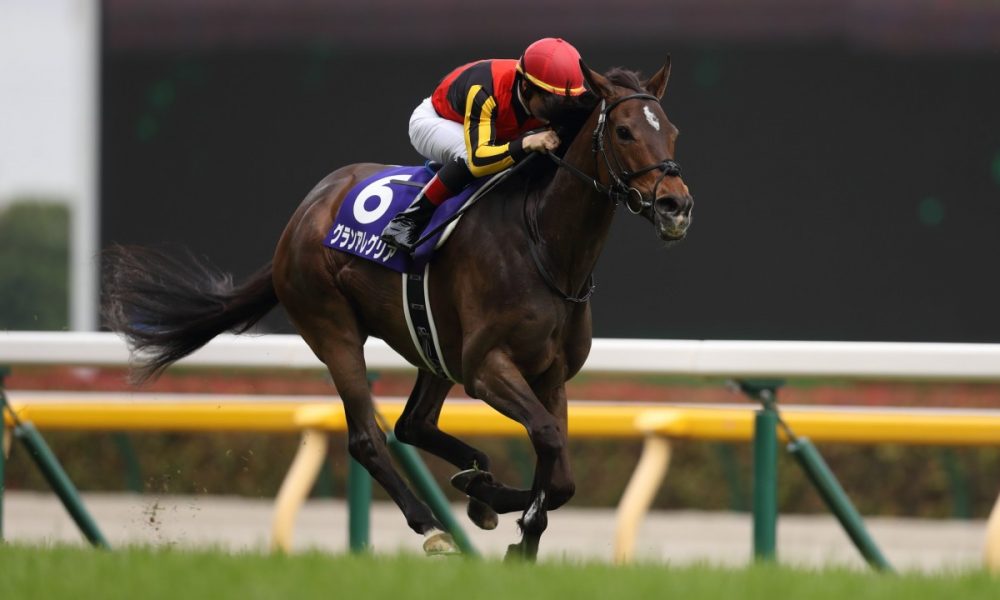 Gran Alegria (Deep Impact) is primed for a return to action in this weekend’s Autumn Tenno Sho (Gr 1, 2000m) at Tokyo and the brilliant mare’s rider Christophe Lemaire is firm in his conviction that she has all the attributes needed to fend off last year’s Triple Crown hero Contrail (Deep Impact) and the current star three-year-old colt Efforia (Epiphaneia).

The remarkable five-year-old’s end-of-year target will be decided by how she fares in this Sunday’s major, with her connections considering a further stretch to a mile and a half in the Japan Cup (Gr 1, 2400m) or a tilt at the Hong Kong Cup (Gr 1, 2000m) at Sha Tin in December. A conclusive defeat on Sunday might well see the Kazuo Fujisawa-trained galloper drop down in distance for an attempt at back-to-back wins in the Mile Championship (Gr 1, 1600m) but Lemaire is not contemplating such an outcome.

“The owner and trainer will decide plans after this weekend but I’m very confident for Sunday even though the field is very competitive,” Lemaire told Asia Bloodstock News after the JRA published a 16-strong entry list, which also features the Spring Tenno Sho (Gr 1, 3200m) hero World Premiere (Deep Impact) and the high-class Curren Bouquetd’or (Deep Impact).

Japan’s champion jockey said he does not fear the challenge of a second attempt at 2000 metres for Gran Alegria, despite a defeat in her only previous race over the distance in the Osaka Hai (Gr 1, 2000m) back in April, when fourth behind Lei Papale (Deep Impact).

“She definitely has had her best performances over a mile but she has had only one try over 2000 metres and it was early in the season on a heavy track, which meant she ran a good race but could not perform at her best. This time I think the 2000 metres at Tokyo racecourse will be a good fit for her, especially if the ground is good,” Lemaire continued.

“She is more mature, she is more relaxed in her races, so she should handle the mile and a quarter. I’m not really worried about the trip.”

This time last year, Gran Alegria had followed a Yasuda Kinen (Gr 1, 1600m) success in June with a fresh-up autumn victory in the Sprinters Stakes (Gr 1, 1200m) and was destined to complete a hat-trick of elite wins in the Mile Championship (Gr 1, 1600m). Her fourth place in the Osaka Hai in the spring preceded an impressive win in the Victoria Mile (Gr 1, 1600m) and she was then beaten by only a head behind Danon Kingly (Deep Impact) in this year’s Yasuda Kinen.

“Her strong points are her natural speed but also her very good turn of foot,” Lemaire said as he considered the traits that could lead to Gran Alegria landing a 2000-metre Grade 1 to complement those six-furlong and mile triumphs.

“As a two-year-old she was very keen and used to race close to the speed. Even with her natural speed, she was still able to make good acceleration in the last stretch and as she has got older, she has learned to relax and be comfortable during her races, so she has been able to use her very good turn of foot in the last 300 metres in races like the Mile Championship and Yasuda Kinen.”

The class and hoped-for stamina to fully see out the 2000 metres come from her sire, the late, great Deep Impact (Sunday Silence), while another bucket full of elite genes, with that dash of killer speed, come from her dam, Tapitsfly (Tapit), a two-time Grade 1 winner at up to a mile in the US who sold to Katsumi Yoshida for US$1.85 million at the 2012 Fasig-Tipton November Mixed Sale.

Meanwhile, the Sunday Racing-owned mare’s poster boy rival Contrail was last seen placing third in the Osaka Hai, his only race since the great Almond Eye (Lord Kanaloa) ended his unbeaten status in last November’s Japan Cup. But the Yoshito Yahagi-trained four-year-old has been eye-catching in his recent work at the Ritto training centre.

Whereas Contrail dominated the 2020 three-year-old crop, no single horse has stamped its authority on this year’s Classics, with the six races going to six different horses. Efforia looked to have the colts’ series at his mercy when an impressive three-length winner of the Satsuki Sho (Gr 1, 2000m) in the spring but was a nose second to Shahryar (Deep Impact) in the Tokyo Yushun (Gr 1, 2400m) and connections opted to miss last Sunday’s final leg, the Kikuka Sho (Gr 1, 3000m), in favour of a test against his elders.

“Efforia is the best three-year-old this year,” Lemaire opined. “He was beaten in the Derby but he could have won if things had gone a little differently. He was brilliant in the Satsuki Sho and I’m really looking forward to seeing him this autumn. He’s already one of the top horses but I think he will be the best next year. This year it is still Contrail and Gran Alegria but Efforia will be number one next year, I think. But even if Contrail and Efforia are very talented horses, Gran Alegria doesn’t have to fear them because she is one of the best horses in the country as well.”

Lemaire is well-placed to judge the merits of the Classic crop, having finished second in four of those races including aboard Orthoclase (Epiphaneia) in the Kikuka Sho, which went to the Satsuki Sho runner-up Titleholder (Duramente) in a stunning victory. Duramente’s (King Kamehameha) first Classic-winning offspring blazed to the lead, dictated the tempo and powered home five lengths clear under Takeshi Yokoyama, who also holds Efforia’s reins.

“I think the best horse won,” Lemaire said. “He made the running: the first 1000 metres were quite fast; after that, the jockey reduced the pace and did it very well but the horse was able to pick up again; he used his beautiful stride and used his stamina to knock out the other contenders.”

Mirco Demuro was seventh in the Kikuka Sho aboard Arrivo (Duramente) and he, too, was impressed with the winning horse and the burgeoning Yokoyama, who broke into the JRA premiership’s top ten last year and is currently fifth with 82 wins.

“Titleholder is the kind of horse that if he doesn’t lead, he doesn’t put in a good performance,” Demuro said. “This time it was the first time they ran the race in Hanshin, normally it’s Kyoto, so on Sunday the start and the second corner were all on the inside course, so you really needed a horse that likes to turn all the time. It wasn’t an easy race.”

Yokoyama has a strong racing pedigree, being the third son of the multiple Grade 1-winning jockey Norihiro Yokoyama, who retired from the saddle in 2018. His older brother Kazuo Yokoyama is also ranked in the top ten.

“He started riding about four years ago and from last year he started to get some good winners and he improved a lot. This year he has had his best season. He’s definitely one of the best younger jockeys in Japan right now,” Demuro added.

Lemaire went even further with a prediction that Yokoyama is set to be “the next top jockey in Japan, in my opinion,” and added that as he has “been getting more and more experience, he’s got more confidence. He’s a really nice kid, he has his head on his shoulders and he’s listening.”

While Lemaire and Yokoyama prepare to lock horns in the Tenno Sho, Demuro is without a mount but is instead looking towards the Japan Cup on November 28 when he hopes to ride a rejuvenated Uberleben (Gold Ship), who is being pointed to the international feature rather than the fillies’ and mares’ Queen Elizabeth II Cup (Gr 1, 2000m) on November 14.

The filly provided the Italian with his latest Classic success back in June when she won the Yushun Himba (Gr 1, 2400m), but after an injury to her near-fore, she was in need of the outing when only 13th in the Shuka Sho (Gr 1, 2000m), the final leg of the fillies’ Triple Crown, at Hanshin on October 17.

“She came back after the Oaks and she’s the kind of filly that needs one race to get back to 100 per cent. Last week, I thought she was more ready but she was actually a bit behind in her condition, she couldn’t follow the pace and the last 500 metres she just showed that she needed the race,” said Demuro of Uberleben’s return behind Akaitorino Musume (Deep Impact), the filly she beat into second in the Yushun Himba.

“Her form line is good and the owner wants to go to the Japan Cup because a three-year-old filly has a good weight advantage of 53 kilos to 58 kilos. The owner and trainer are confident that she will improve a lot, they want to go there so I hope she will improve off her run.”

After Titleholder rounded out the Classic business at the weekend, the stage is set for a big autumn of championship deciders with the Tenno Sho rolling into the Queen Elizabeth II Cup, then to the Mile Championship when the top milers Danon Kingly and Schnell Meister (Kingman) will likely do battle, before the Japan Cup leads into the annual Grand Prix finale, the Arima Kinen (Gr 1, 2500m), on December 26.