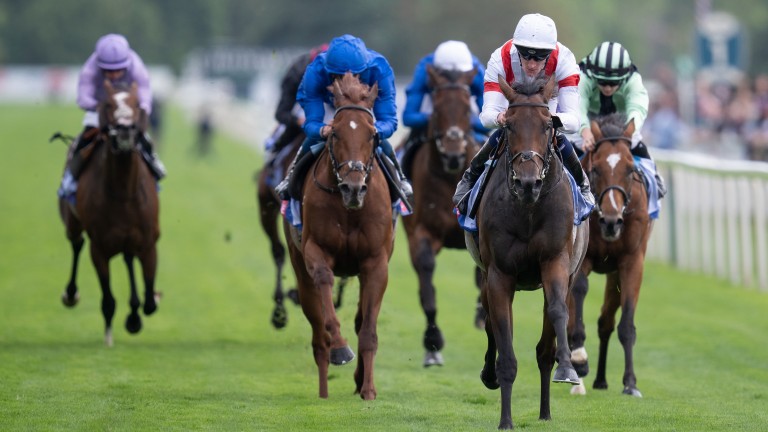 It looms as a trend but is more likely a tidal wave which is why last week’s Great Voltigeur Stakes winner Deauville Legend has been generally installed as Melbourne Cup favourite.

Such is the contemporary record of northern hemisphere-bred and trained three-year-olds in the great race.

Not only have we seen Rekindling and Cross Counter win the Cup in 2017 and 2018 – the latter in a never going to lose swashbuckling fashion; Il Paradiso was then arguably unlucky when squeezed out late and beaten a long neck in 2019 before Tiger Moth was a beaten a similar margin when second in 2020.

This period has marked the first concerted assault on the race from this genre and has been remarkably on the money.

Aidan O’Brien, trainer of Il Paradiso and Tiger Moth, had teased in 2007 when his three-year-old Mahler finished third to Efficient and may well have thought he’d stumbled upon a new recipe.

However, it was the following year, that the O’Brien-trained trio Septimus, Honolulu and the three-year-old Alessando Volta were inglorious failures after settling in the first three pace-setting positions.

O’Brien returned to the track when infamously summoned by stewards but did not return with a Cup runner until 2015 and the three-year-old experiment had been dormant until, that year, when Bondi Beach ran unsuccessfully for the Ballydoyle principals and Lloyd Williams who would then engineer the breakthrough win with Joseph O’Brien in 2017.

You could argue that Rekindling, with 51.5 kilograms, and Cross Counter with a half kilogram less might have beaten the handicapper. Il Paradiso and Tiger Moth each had 52.5 kilograms and it will be interesting to see how outgoing Racing Victoria handicapper Greg Carpenter assesses the northern hemisphere three-year-olds this year when the weights are released on September 13 (following the English and Irish St Legers on September 10 and 11).

Nonetheless, the recent history suggests that only a significantly higher handicap burden would negate their influence.

Deauville Legend stands as the obvious choice given the authority of his Great Voltigeur win and the fact that his young trainer James Ferguson is well versed in Australian racing having travelled here with horses prepared by Cross Counter’s trainer Charlie Appleby.

Deauville Legend, owned by Bon Ho of Classique Legend prominence, has form which almost mirrors that of Cross Counter but we have, alas, missed the price!

Gai Waterhouse’s high-profile purchase Hoo Ya Mal, runner-up in the Epsom Derby and just behind Deauville Legend when finishing third in Goodwood’s Gordon Stakes, is another prominent in Cup prognostications but is also well enough found in the futures market. Waterhouse has failed with two previous northern hemisphere three-year-old acquisitions, Tres Blue and Sir Lucan.

The Aquis Farm part-owned three-year-olds Zechariah and Chairman, trained by Freddie and Martyn Meade, are also Cup nominated but most early interest ought to focus on Aidan and Joseph O’Brien’s raft of three-year-old nominations.

The most likely among them I suspect and still available at suitably speculative odds are Point King (Williams syndicate owned), Changingoftheguard, United Nations and Waterville (although I have no stable intelligence on any of this).

Each of the four has entries on that significant September weekend in either the Paddy Power Stakes (which Tiger Moth won) or in one or both of the St Legers (which was the Rekindling and Il Paradiso pathway).

Waterville was, at Leopardstown in July, just a half length behind Point King who then maintained his unbeaten 2022 record with victory in the Vinnie Roe Stakes; United Nations is the still largely unexposed winner of the Lingfield Derby Trial while Changingoftheguard’s form is comparable with that of Deauville Legend and Hoo Ya Mal.

Point King is prepared by Joseph O’Brien who, of course, not only won the Cup with Rekindling but also with Twilight Payment (2020) and had Master Of Reality finish second before being relegated to fourth on protest in 2019.

The latter two older horses progressed to Melbourne from running well in the Irish St Leger and, this year, Cleveland and Raise You look to be the most likely Cup contenders among a large contingent of O’Brien nominations for the Irish Classic.

However, I’m still in the corner of the three-year-olds pending the handicapper’s intervention.

Verry Elleegant, as has been well documented, failed to beat a runner home at her international debut in the Group 1 Prix Jean Romanet but fear not (provided she holds together physically).

A crawling first 1000 metres, covered in 68 seconds, meant she was never going to threaten from the rear. She ran her last 600 metres in 34.7 seconds which was just 0.1 slower than winner Aristia and runner-up Rosscarberry who dictated terms from the front.

Her trainer Francis Graffard said: “She had a good blow after the race. I think she needed the race.”

In contrast, State Of Rest was palpably disappointing when second last of nine in the Group 1 Jacques Les Marois but what on earth was he doing being switched back to 1600 metres? That is beyond logical explanation and it’s hoped it doesn’t have him racing too keenly on his middle distance return.

The Frankel filly Inspiral recorded her sixth win from seven starts as she led home a three-year-old trifecta in the Jacques Les Marois and is arguably the best horse in Europe bar Baaeed.

Her earlier victory in the Group 1 Coronation Stakes at Royal Ascot came by four and three-quarter lengths from last weekend’s four and a half length Group 1 Del Mar Oaks winner Spendarella. That’s been the form race of the season with subsequent major race winners Tenebrism, Sandrine and Prosperous Voyage well beaten, as were previous Group 1 winners Discoveries, Cachet, Mangoustine and Pizza Bianca.

The David Simcock-trained, and now part Australian-owned, Light Infantry finished second with the second best closing sectionals and is now in contention for the Golden Eagle on October 29.

That all-comers Group 1 second stamps him as better credentialed than any of the previous six northern hemisphere three-year-olds to contest the Golden Eagle.