’Now they are living it, they are blown away by the success’ 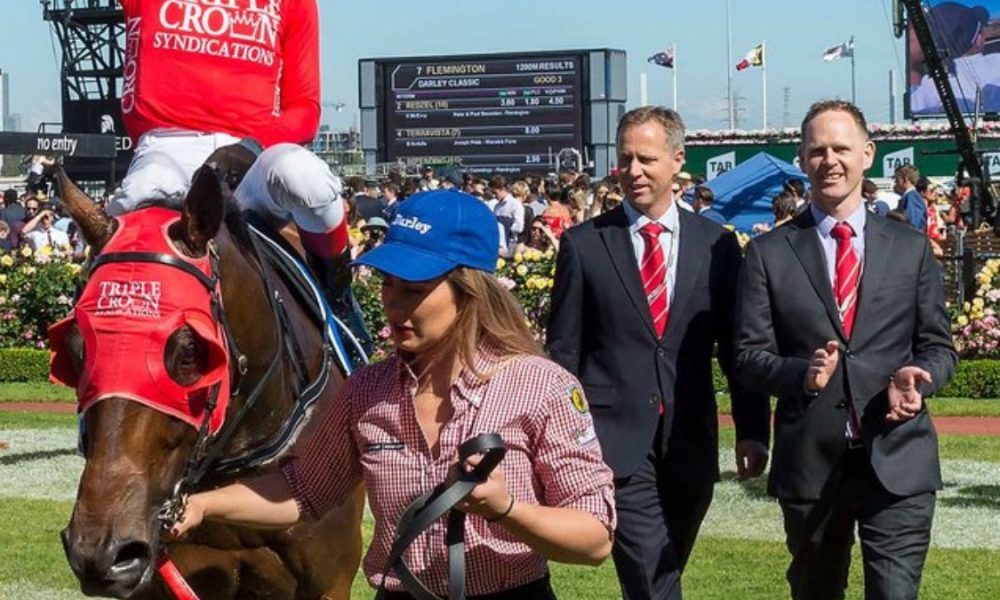 Triple Crown Syndications’ Michael and Chris Ward are as synonymous with horseracing’s Everest as Sir Edmund Hillary is with the real thing.

They have made The Everest (1200m) their own since its inauguration in 2017 with their red and white colours carried by Redzel (Snitzel) in three runnings of the world’s richest sprint race resulting in success on two of those occasions.

Remarkably, the Ward brothers are now poised to scale the mountain yet again, this time riding on the back of last Saturday’s gutsy Doomben 10,000 (Gr 1,1200m) winner Mazu (Maurice).

“It would be incredible to have our fourth runner in six years and to win it would be extraordinary. To see how we can change his group of owners’ lives, it would be just as good as the first one,” Michael Ward told ANZ Bloodstock News.

“We know what sort of ride they are in for and they have a lot to look forward to and we are very happy for them.”

The ownership group involved in Mazu is totally different from that connected with Redzel who, at his peak, was the type of horse they could only have ever hoped to find.

“No doubt these people had been sitting on the sidelines when Redzel was racing and saw what he was able to achieve and that was probably the catalyst for them to get involved. They probably only dreamt what was possible and now they are living it, they are blown away by the success they are having.”

While Mazu’s excitable group of owners can’t quite believe their luck, Ward remains measured and calm knowing only too well the tough journey that lies ahead to Everest day in October.

“It’s a big beast in itself, the Everest. Firstly securing the slot deal to start with takes a lot of work and a lot of people don’t realise that. It’s been months of solid work and now it’s time to target the race and make that our grand final.”

Mazu is in the very capable and experienced hands of the father and son training team, Peter and Paul Snowden.

“In racing there’s a lot of emotion at times that goes around but Peter and Paul are always logical thinking trainers and that stands them apart. They are very measured in their approach and excellent conditioners of horses. We work very well together. From my experience that can make a difference. It’s about pulling together numerous people with special skills. It’s a team sport and if you are lacking in those areas it’s very hard to achieve success.”

Eighteen years ago, Ward, now 50, and his five-year younger brother Chris, walked away from successful careers in the finance industry to start up Triple Crown Syndications.

“When we were growing up we had some exposure to racing and breeding on a small scale through our parents but we got to a stage in our lives where we decided to follow our passion. You only live once and we decided to have a crack.

“We started small and it’s come a long way since then. It’s been an enjoyable ride and certainly beats sitting behind a desk in the finance industry.”

Since venturing from the corporate world into racing they have worked tirelessly to build their judgement of horseflesh.

“In those formative years, it was very much about taking in and absorbing as much information as we could. John Hawkes was a great mentor in the early days and from those beginnings, it was about defining it ourselves and watching and learning and following horses we looked at in the sales and how they performed and how their traits transformed into race success. We found a process that worked well for us and it was about continuing to do more of the same.”

That process has certainly worked wonders for them so far.

“The first step is doing the genetics work and rather than include the horses that don’t have the capacity to reach to elite level, and that leaves us with a very extensive shortlist once we hit sales ground and farms pre-sale, and then it becomes a clean sheet of paper to find the most athletic horse and take our time.

“We do take our time when we are looking and make sure we have the time to look at how they move and their temperament and having two sets of eyes and naturally being brothers we see and think similarly and it really helps in that regard bouncing off each other.”

I asked Ward to share his recollections of Mazu when they purchased him as a yearling at the 2020 Inglis Classic Sale for $180,000.

“I remember him as a very athletic well balanced horse that moved particularly well. Just seeing the way they walk and use themselves he was one that stood out. We see thousands each year, it becomes obvious which horses stand out like watermelons and that was the case with this horse. He was quite an obvious horse in the end.”

Two years on and Mazu is proving their judgement right. For the next four weeks, he will enjoy a rest in the spelling paddock before returning to attempt his first ascent of The Everest.