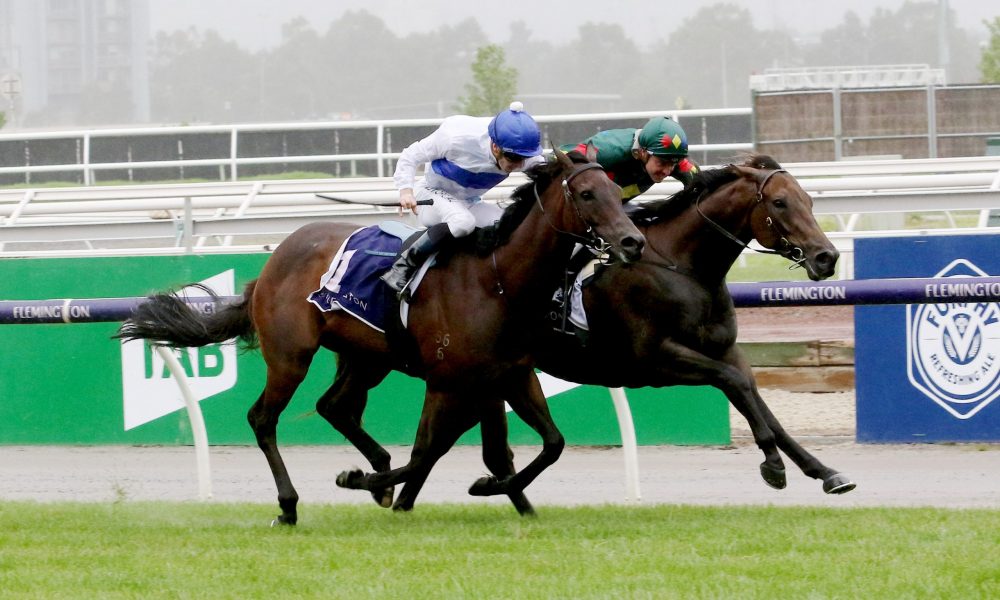 The sight of their head-to-head duel down the Flemington straight will long be remembered with victory going to Alligator Blood, who refused to accept defeat when winning by a short-head, with Catalyst the gamest of seconds.

The time for the 1400–metre journey on the Soft 5 track was 1:22.61, a smart figure in the conditions. That was due to the fast closing sectionals as the pace was moderate early on, with Alligator Blood leading and his rival racing at his girth in a race of tactics.

This was Alligator Blood’s ninth win from ten starts and he now heads for a rematch with Catalyst, a winner of six of his eight starts, in the Australian Guineas (Gr 1, 1600m) at Flemington tomorrow week.

And while the third-placed Chenier (Medaglia d’Oro) proved no serious threat to that star pair, he clocked 33.33 (last 600m) for a good first-up run. Having finished a length behind Catalyst, the Godolphin-raced colt also heads to the Australian Guineas.

Also emerging as an Australian Guineas contender was the Ken Keys-trained Soul Patch (Shamus Award), who made ground from last in the six-runner field for a good first-up fourth, beaten just over three lengths, clocking 33.48 for his last 600 metres.

The main race on Saturday’s Flemington card was the Black Caviar Lightning Stakes (Gr 1, 1000m) and in a shock result the South Australian-trained gelding Gytrash (Lope De Vega) scored a first-up win, his seventh success in 15 starts, but his first victory above Listed level.

He tracked the leader Redzel (Snitzel) on the rails side, took the lead nearing the 100 metres and then fought back to win by a length, with the filly Loving Gaby (I Am Invincible) finishing well for a very good third in a time of 57.53.

The form out of the race suggested the better place to be was the rails side, which added considerable merit to Loving Gaby’s effort, who clearly did best on the grandstand side of the track, which also included favourite Nature Strip (Nicconi), who finished (3.2 lengths) fourth after setting the pace.

Earlier in the day, the Team Hawkes-trained colt Ole Kirk (Written Tycoon), whose dam is a sister to Black Caviar (Bel Esprit), achieved a noteworthy feat in taking out the Talindert Stakes (Listed, 1100m) on debut.

Well ridden by Dwayne Dunn, Ole Kirk settled in tenth place, but not far off the leading group on the rails side, who set a solid pace that resulted in the 600 metres (from the 1000m to the 200m) being clocked in 32.78.

Considering the fast mid-race pace, Mildred did very well in holding on so well under her top-weight to fill the minor placing after clocking 44.24 for her 800 metres (from the 1000m to the 200m).

Toscanini is a maiden after three starts but that status is unlikely to remain much longer, especially when he is stepped up in distance.

Racing at Randwick on Saturday was conducted on a Soft 7 track and one of the features was the Light Fingers Stakes (Gr 2, 1200m), which proved a triumph for Godolphin with their three Group 1-winning fillies filling the placings at their first runs back.

The impressive winner was Flit (Medaglia de Oro), who was racing in blinkers for the first time, and after travelling strongly in third place on the rails, drew away over the closing stages to score by a length and three-quarters in a time of 1:10.17.

Lyre (Lonhro) ran on nicely along the rails, coming from sixth at the home turn, with the Golden Slipper Stakes (Gr 1, 1200m) winner Kiamichi (Sidestep) holding on for third, half a length further back after setting a fast pace.

Favourite Libertini (I Am Invincible), who was also resuming, raced below her best in the conditions, finishing (3.1 lengths) fourth after failing to show her usual brilliant turn of foot, steadily making ground from sixth at the home turn.

One to catch the eye was the John Sargent-trained filly Emeralds (Sebring), who settled back in seventh place and deep before running on well for a very good (3.3 lengths) fifth, looking suited to further in a promising first-up run.