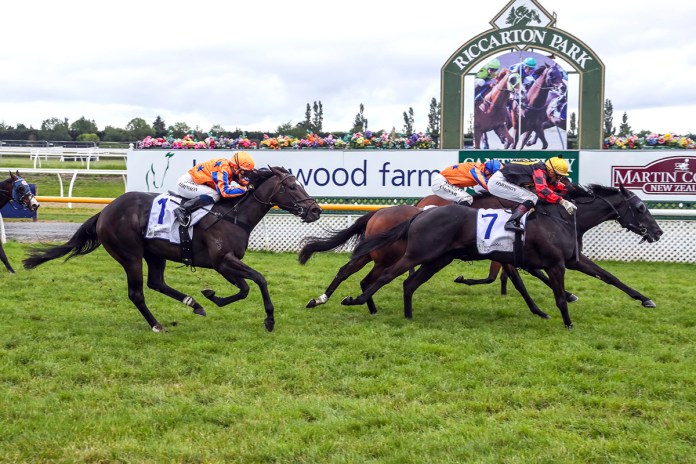 The moon and stars aligned perfectly for the entities involved in The Perfect Pink (Savabeel) and her New Zealand 1,000 Guineas (Gr 1, 1600m) at Riccarton on Saturday.

Jamie Richards secured his 50th Group 1 winner, an astonishing number given his relatively short career as a trainer. The wise-beyond-his-years young man saddled up five runners in the season’s first classic for the fillies, which, on numbers alone, would seem to be a major advantage, yet four of the five finished 1-2-3-4.

Opie Bosson, stable jockey for Te Akau Racing, had the dilemma of choosing which of the five to ride. That the star jockey chose The Perfect Pink says as much about his prediction and choice as it does about his ability and talent. When the most important races need to be won, Bosson is always thereabouts and Riccarton’s Cup week carnival belonged to him.

Highly regarded by both trainer and jockey, The Perfect Pink had much in front of her as recently as late September. An attempt at the Classic may not have taken place except for a start on the Cambridge synthetic track.

“We always had a lot of time for her, but she needed time to mature,” said Richards. “We weren’t originally going to bring her down here, but I’m thrilled that we did. I actually thought she was the one to beat on good ground, but thankfully she has been able to do it on soft ground as well.”

After landing the maiden win at Cambridge, what likely encouraged the connections to proceed to Riccarton was her fourth behind stablemate Imperatriz (I Am Invincible) in the Soliloquy Stakes (Gr 3, 1400m), the filly’s fourth start.

She had one outing at two, finishing nicely for fourth on debut at Hastings in April. Another fourth, first up at three at Te Rapa, led to her win at Cambridge followed by the all-important Group 3 fourth at her home track of Matamata on Labour weekend.

That day she was well back rounding into the straight, threaded between runners and once in the clear finished very strongly, putting up the fastest last 600 metres of 34.18 seconds.

For Bosson, the Guineas was his first raceday ride on the filly although he was fully aware of her talent, having partnered her in four of her trials.

“We picked her out as a two-year-old as a perfect 1,000 Guineas-type filly, so it is a great result. We got a bit of a rough run and I was behind one I didn’t want to be behind,” he said. “The plan in my mind was to get to the outside and the better ground as she doesn’t really like it the way it is. I knew I had the Savabeel factor on my side and that really kicked in.”

The Savabeel (Zabeel) factor indeed. The same factor that was present the previous Saturday when Bosson was aboard Noverre (Savabeel) for the combo’s 2,000 Guineas triumph.

There appears to be no stopping Waikato Stud’s multiple champion sire. Fifteen weeks into the current season, his lead re earnings is already $642,000. It would take a brave man to suggest that Savabeel won’t chalk up an eighth successive New Zealand Sire Premiership.

If Noverre adds the rich Karaka 3YO Classic (RL, 1600m) in January, it will be all over. As well, judging from Bosson’s comments, The Perfect Pink will be his mount in next year’s New Zealand Oaks (Gr 1, 2400m) and he rates her chances highly.

“She will be an out-and-out Oaks filly for sure. She doesn’t over-race, she just drops the bit and does whatever you want. She is the perfect staying type,” said Bosson.

Of these seven, four, including The Perfect Pink, are bred on the Savabeel-O’Reilly-Centaine (Century) cross. All three stallions are Waikato Stud stalwarts.

So far, 22 stakes winners are bred Savabeel over O’Reilly. In addition to the seven Group 1 champions above, add five that have won at Group 2 level, four at Group 3 level, eight more at Listed level and 16 stakes-placed winners.

The Savabeel-O’Reilly cross is not the only significant cross within the filly’s bloodlines, however.

Not a bad foundation upon which to set up the modern day Savabeel-O’Reilly phenomenon.

The Dimple herself was a prolific winner. Nine of her 16 wins were in black-type races, her premier performances being three Group 3s.

The Dennis family became involved with this line in 1951 when H R Dennis took over Eager Lady (Man’s Pal). The unplaced mare had, at that time, produced two foals. One was unnamed and the other died. Her first of seven winners for the Dennises was a two-year-old Riccarton winner named Can’t Fault (Defaulter). The second was open handicapper, The Wanderer (Kurdistan), who won 18 times.

The Pixie, a Southland Guineas (Listed, 8f) winner, was an outstanding producer. She had just four foals for three stakes winners: The Twinkle (Gate Keeper), The Dimple and The Fantasy (Gate Keeper) who accumulated a remarkable 49 wins including 24 stakes wins between them.

The Pixie’s wonderful record was duly recognised by the New Zealand Thoroughbred Breeders’ Association in 1981, awarding her their Broodmare of the Year title, although she had to share the award with Taiona (Sovereign Edition), dam of Sovereign Red (Sir Tristram).

However, her daughter, The Fantasy, did not have to share her title, scoring hers on her own in 1994.

If you are counting, that makes three Broodmares of the Year in three generations, underlining just how strong this family has become from such humble beginnings.

The Grin’s ten winners include The Jewel (O’Reilly), also winner of the New Zealand 1,000 Guineas, a three-quarter blood sister to The Perfect Pink’s dam The Solitaire (O’Reilly).

Adding Savabeel into the mix has already proved successful as $2 million earner The Chosen One (Savabeel) is a grandson of The Jewel.

The 1,000 Guineas is a regular feature among this family’s elite performers. La Diosa (So You Think), the 2016 victress, is from The Grin’s Group 2 stakes winner Star Affair (Star Way).

A total of 32 stakes winners and 20 stakes-placed winners descend from The Kurd, a wonderful family in every way.

In last Friday’s ANZ Bloodstock News, Tim Rowe’s interview with Tony Rider explained how Milan Park became involved with the filly. Rider wanted to buy her dam The Solitaire (O’Reilly) with the intention of using his Savabeel nomination, the magic cross his main motivator.

The answer was ‘no’ but the Dennises came back suggesting a 50-50 deal. They put up the mare and Rider put up his nomination.

Triple Listed winner and Group 1 placed, The Solitaire won ten times and The Perfect Pink is her second winner. She has a yearling filly by Per Incanto (Street Cry) and is due to foal to Ocean Park (Thorn Park). The partnership will likely be reinstated between the Denisses and Ryder for the upcoming season.

A purchase that originally turned to custard and which has taken 14 years to see a result, is the story behind the stout win by Mondorani (Burgundy) in Saturday’s New Zealand Cup (Gr 3, 3200m).

Popular bloodstock agent Robert Dawe takes up the tale which began when he was approached to buy a mare for a Hong Kong client in 2007.

“My client was very keen to purchase Wildcat Woman (Forest Wildcat) and I was present at that year’s Keeneland November Broodmare Sale. Although unraced (her original owner decided to sell all his stock after several paddock accidents put him off racing altogether), the filly was sent to More Than Ready as a three-year-old,” said Dawe.

Wildcat Woman was a daughter of the first class filly Arborea (Imperial Prince), winner of the VRC Oaks (Gr 1, 2500m) and VRC One Thousand Guineas (Gr 1, 1600m). Arborea’s eight wins also featured three further Group successes and she was fourth against the boys in the 1994 AJC Derby (Gr 1, 2400m) behind Mahogany (Last Tycoon).

Her half-brother, Delta Form (Marscay), won twice at Listed level in South Africa before being sent to California where he added the Group 2 Del Mar Handicap (11f) and a Listed race at Santa Anita.

Arborea herself was half-sister to Group 2 winners Binding (Belong To Me) and Paris Dream (Personal Hope) while her granddam, Lady Eleanore (No Robbery), won the Delaware Oaks (Gr 2, 8.5f).

With plenty of black type close up in the family and in foal to More Than Ready (Southern Halo), the mare was knocked down to Dawe for US$125,000.

Dawe continued: “We spoke twice that day. He watched me buy her live via live streaming. In his second call he expressed that he was very happy with the purchase.

“But the following day he called again to report that his wife was not happy, placing me in quite a predicament,” said Dawe. To his own wife, Leslie, Dawe commented: “It looks like you are now the proud owner of a mare.”

To the rescue came John Murdoch, another client, who took over the purchase. The mare has produced three winners including Del Mondo, the foal at foot that Wildcat Woman had before her export to New Zealand.

Mondorani is Del Mondo’s first foal and is very much a stayer who has finally been rewarded. His owner-breeder, John Murdoch, is also a stayer and a saint, according to Dawe.

Del Mondo’s only other named foal is King Mondo (Sweynesse) who finished strongly for second over 1600 metres at Pukekohe last Thursday.

Little Avondale sire Per Incanto (Street Cry) leaped up the Australian earnings list into 24th spot after his Lost And Running franked his high class form in landing The Hunter (1300m) at Newcastle on Saturday.

A super fourth in The Everest (1200m) followed by a hard-closing second to Eduardo (Host) in the Classique Legend (1300m), made Lost And Running the horse to beat in the $1 million feature, and he delivered.

The Hunter is the gelding’s seventh win in 12 starts. His total earnings stand at $2.2 million, of which $1.77 million has been achieved in his last three starts.

Among the top 25, Per Incanto has had just 36 runners in Australia so far this season and only New Zealand counterparts, currently sixth Zed (Zabeel) and currently seventh Shocking (Street Cry), have had fewer runners.

Lost And Running’s damsire, Danroad (Danehill), is faring even better on the Australian Broodmare Sire rankings. With just two winners, Danroad sits fourth with earnings of $7.52 million. Of course it helps when the other winner is Melbourne Cup (Gr 1, 3200m) winner and otherwise huge star Verry Elleegant (Zed).

Rich Hill Stud’s Vadamos (Monsun) racked up his second New Zealand stakes winner when Grace’s Secret led all the way in the Welcome Stakes (Listed, 1000m) to take her record to two from two.

The filly was hardly threatened during the run from the top of the straight and kept extending her lead to clear out by more than four lengths. She looks quite smart and is proving quite a bargain as well.

Her dam Fermentation (Pentire) was sold by Pencarrow Stud for $7,000, carrying Grace’s Secret. Pencarrow retained the mare’s first foal, also by Vadamos (Monsun), named Eau De Vie, who was beaten a long head and a neck on debut earlier in the month.

With a winning strike–rate of eight wins from 16 starts, Justaskme (No Excuse Needed) could not have been more impressive in bagging the Tauranga Stakes (Gr 2, 1600m) on Saturday.

A clear last to the 800 metres before tacking onto the back of the small seven-runner field, Justaskme was widest into the straight and reaching the 200 metres bolted away to be five lengths in front at the line.

The six-year-old, a three–quarter brother to Group 1 winner I Do (No Excuse Needed), has been in good recent form, taking out the Opunake Cup (Listed, 1400m) at the end of last season and then followed that with a second in the Winter Cup (Gr 3, 1600m). He remained in Christchurch to add an open handicap and was second to Cheaperthandivorce (Savabeel) in the Thompson Handicap (Gr 3, 1600m) prior to this latest win.