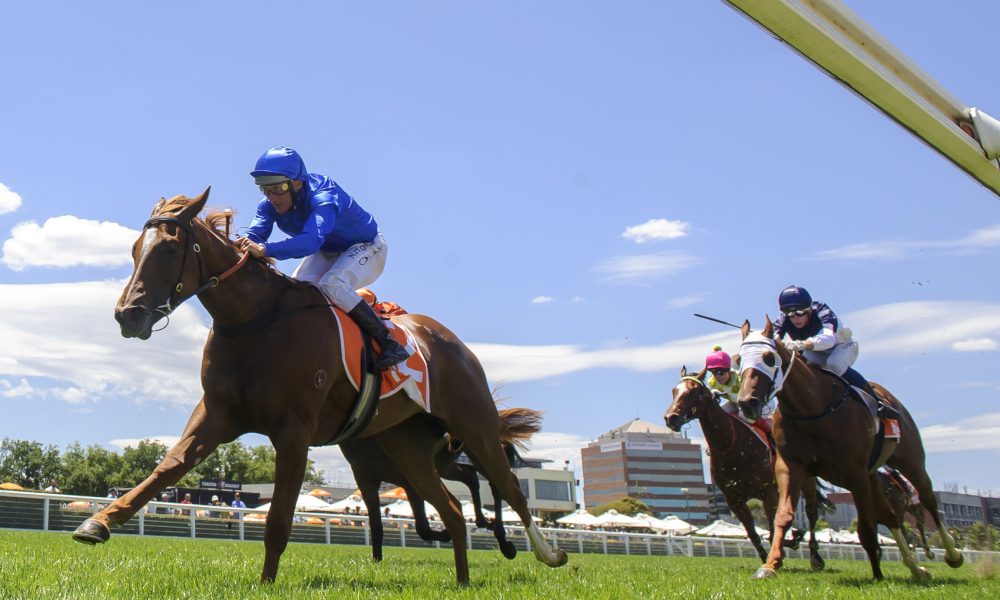 Racing and breeding love their rags-to-riches stories, like the black Bletchingly colt passed-in at auction who became a king, or the $20,000 yearling filly who reigned supreme on Slipper day in 2017.

But occasionally we’re in thrall when the big guns come out, the giants of the game looking to make their powerhouse empires more formidable still.

Such was the case at the 2010 Sydney Easter Yearling Sale, when two heavyweights collided.

In fact, it was a Sheikh-off. In the blue corner, Mohammed and his Godolphin-Darley operation. In the blue-with-white-epaulettes corner, Hamdan of Shadwell fame.

Both Dubai behemoths (or their agents at least) were extremely keen on Lot 99, a bay filly by the flying General Nediym out of a mare, Pimpinella, who was a half-sister – out of the Twig Moss mare Twiglet – to the great Hong Kong sprinter-miler Fairy King Prawn.

In the end, it was Mohammed who shook off his brother Hamdan, snaring the must-have specimen for a record price of $600,000. It was the highest sum paid to that time for a daughter of General Nediym, who had died the year before after ten seasons at stud.

Godolphin only bought two lots at that sale. Well enough off for horses, they were seeking something they didn’t have, and a well-built daughter of General Nediym from the Twiglet family fitted the bill.

Often times the big guns can misfire (we’re looking at you, Snaafi Dancer and The Green Monkey), but in this case, the walls around racing’s treasures appear to have been breached.

Named Anise, the filly won on debut at Rosehill, took the Kindergarten Stakes (Gr 3, 1100m) at her fourth start, and notched six other stakes placings in a 23-start career. And while the bottom line shows she recouped only half of her price tag in prize-money, Anise is now promising some intoxicatingly sweet results at stud for Sheikh Mohammed’s Darley enterprise.

Her first foal was a colt, fittingly named Ouzo (such a fit, in fact, that a South African mare also named Anise had a colt with the same name around the same time). The Australian Ouzo, by Danehill’s son Exceed And Excel, would eventually retire unraced, while Anise’s second foal, a full brother named Anethole (another sweet flavouring substance derived from anise), has so far earned two wins out of town.

A daughter of Lonhro, Pastis (another liquorice-tasting drink) is a three-year-old who has also been retired unraced, but for a fourth foal Darley led the mare to another of their barns to be covered by Caulfield Guineas hero Shooting To Win. The result was the now two-year-old filly Picarones.

Named this time for a doughnut-shaped Peruvian dessert – whose flavour you could probably take a stab through the middle of – Picarones won very impressively on debut at Caulfield last Saturday, to earn mention in early Blue Diamond Stakes musings.

Not only that, she promises to add to Darley’s imposing book of families, fusing a Northern Meteor sireline through Shooting To Win with a female influence from General Nediym.

While the Lightning-Newmarket Group 1 double winner enjoyed fair success at stud, it’s as a broodmare sire that General Nediym’s legacy has more brightly shone. He currently sits tenth on that table in Australia for this season, finished seventh, fifth and ninth from 2016-2018, and has had Group 1 stars as diverse as Jameka, Hey Doc, Mr Quickie and Sizzling borne of his daughters.

An added allure to the Shooting To Win-Anise mating was that Northern Meteor himself had covered another daughter of Twiglet – the triple-Listed winning sprinter Crevette (Danehill) – and produced Cosmic Endeavour, winner of two Group 1 sprints in the 2014 Tatts Tiara and 2015 Canterbury Stakes.

“Anise was a great sort as a yearling and turned out to have quite a lot of ability, and her being by General Nediym – a really good sire of broodmares – was attractive for us as well,” Darley’s head of sales Alastair Pulford tells ANZ Bloodstock News. “Fillies from great pedigrees who can get black type themselves and add something to our broodmare band – bloodlines we don’t have yet in our own herd – are quite attractive.

“At stud, Exceed And Excel seemed the obvious mating for her, with Danehill over that female line, but it didn’t work particularly well so we tried something new with Shooting To Win.

“And since Cosmic Endeavour, by Northern Meteor, was in the pedigree, we thought we’d take a punt on Shooting To Win, since Northern Meteor had obviously worked with the family.”

Going deep into Picarones’ pedigree, she has the backing of two lines kicked off by the very well-credentialled US-bred Mr Prospector mare Rolls, in a 5×4 cross. Rolls met with Star Way to produce Shoal Creek, the dam of Northern Meteor’s sire Encosta De Lago, and was also the dam of Flying Spur, sire of Picarones’ grand-dam Pimpinella.

There’s also Theme Song, the third dam of Shooting To Win, who was a half-sister – out of the outstanding producer Cotehele House – to Danewin and Commands.

Closer to home, Darley has high hopes that Picarones will kick on to show still more ability as she matures, like other offspring of her sire. Shooting To Win’s progeny – the oldest of whom are now four – include the very promising 2019 Bondi Stakes winner Kubrick, as well as Mystery Shot, who is unbeaten in five Victorian starts for trainer Lindsey Smith, including three at Caulfield. There’s also Godolphin mare Tailleur, winner of four from six so far, and triple stakes-placed WA three-year-old gelding Dom To Shoot.

“He’s had plenty of winners. Up until Picarones, they haven’t demonstrated themselves to be very precocious two-year-olds, which he wasn’t himself, since he was a much better three-year-old, but the signs are very good.”

As for the future, Anise now has an Epaulette yearling and is in foal to Darley’s exciting first season sire, former champion sprinter Blue Point, the multiple Group 1 winner who in 2019 became only the second horse in 99 years – after Choisir 16 years earlier – to complete Royal Ascot’s King’s Stand-Diamond Jubilee double.

“Blue Point is one of our big hopes,” Pulford says. “He was a superstar as a racehorse and he was very well accepted in his first season, with a full book. He had some lovely mares coming to him, so he’ll get a really good chance.”

It’s still early days, but the zest Darley showed in acquiring Anise could be started to bear some very sweet fruit.