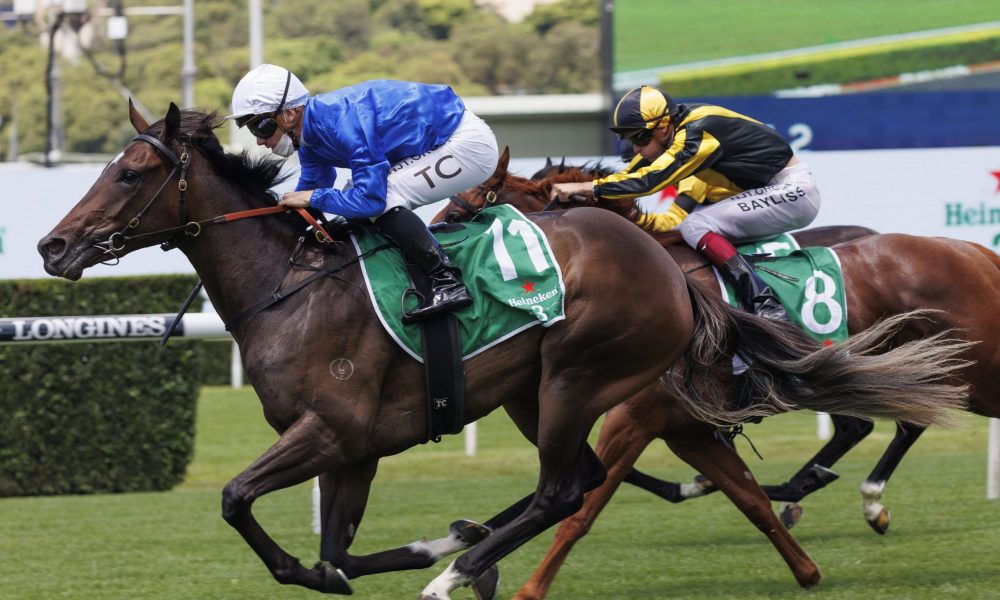 Plymstock – a close relative to a performer deserving recognition as one of Godolphin Australia’s finest – sent a loud signal she might be set to give sire Ribchester (Iffraaj) an overdue boost – with a fighting debut win at Randwick last Saturday.

The two-year-old filly is out of the Redoute’s Choice (Danehill) mare Outdoor making her a half-sister to the redoubtable campaigner Trekking (Street Cry), a sprinter who has perhaps sneaked under some guards in recent years.

The seven-year-old son of Street Cry (Machiavellian) has accumulated a record of ten wins from 40 starts, for prize-money of $5.84 million. That makes him Godolphin Australia’s third-highest stakes winner, behind Hartnell (Authorized), who checked out with $7.47 million, and Colette (Hallowed Crown), poised to become their No 1 with $6.9 million thus far.

A winner of two Group 1s in the 2019 Stradbroke Handicap (Gr 1, 1400m) at Eagle Farm and the following year’s Goodwood (Gr 1, 1200m) at Morphettville, Trekking sits 28th on the all-time Australian earnings table, a fair achievement even if inflated by his three Everest (1200m) efforts – a third, a fourth and a sixth – which tipped in $2.74 million.

The gelding was starting to make an impact by the late spring of 2018. He’d won five city races from 15 starts, the last a black type breakthrough in the Testa Rossa Stakes (Listed, 1200m) at Caulfield, when his dam was sent to Ribchester.

Outdoor had thus fulfilled the two main roles at Darley. A three-time Victorian provincial winner – but a mare from a worthy female line highlighted by her dam, VRC/AJC Oaks winner Serenade Rose (Stravinsky) – Outdoor was put to the mighty Street Cry in 2013 for her first foal, who emerged as Trekking.

Five years later, after a mum-mimicking triple provincial winner in Jetski (Lonhro), Outdoor had the runs on the board to be covered by untried Darley shuttler Ribchester.

“We deliberately chose mares for Ribchester, as we do for most of our first-season sires, who were going to give the stallion an opportunity, while equally respecting that he deserved decent mares because he was a four-time Group 1 winner.”

Darley respected that. Alas the wider breeding market did not.

Ribchester began shuttling to Australia from Ireland in 2018 with an exceptional racing record.

He won four Group 1s over a mile in Britain and France, including the 2017 Queen Anne Stakes (Gr 1, 1m) at Royal Ascot. Frankel (Galileo) had astonished the world with his 11-length victory in the race five years earlier, achieved in a time of 1:37.85 on good-to-soft going, which took him to his record Timeform rating of 147. Ribchester, on good-to-firm going, clocked 1:36.6 to set what is still the record for Ascot’s straight mile.

He was twice named European Champion Miler, an achievement matched this century only by Frankel and Palace Pier (Kingman).

Yet, as has been the case with many a European shuttler, Ribchester’s arrival in Australia drew a fairly underwhelming response. In his first season, 2018, he covered 63 mares for 35 live foals. The following year he served ten fewer mares, again for 35 offspring. He went home to Ireland – where he’d covered 297 mares in 2018-19, and hasn’t been back to Australia since, being picked up instead by New Zealand’s Huanui Stud, where his sire Iffraaj (Zafonic) had stood to such great effect, siring topliners including Jon Snow and Gingernuts.

Plymstock, with her dogged three-quarter-length win for $83,000 last Saturday, is Ribchester’s flag-bearer in Australia. And it’s ironic that her victory was scored over 1000 metres, given her sire’s apparent lack of that much-coveted quality in Australian breeding – speed – was probably what did for his career here.

“It’s often hard to market northern hemisphere stallions here, especially the ones whose form was at a mile and beyond,” Pulford said.

“The market probably didn’t give Ribchester the respect he deserved. He only had small books of mares in his first two seasons here, but if you look at the sireline now, it’s killing it really, through Iffraaj’s other sons like Wootton Bassett, and then Almanzor (by Wootton Bassett).

“Iffraaj was a very good stallion in both hemispheres. So we thought Ribchester would go very well here. I thought he’d go a lot better than he did, but maybe Iffraaj didn’t have the same sex appeal here, or the market didn’t give him as much credit as we did.

“We certainly gave Ribchester much more support than the rest of the market. They didn’t really warm to him, but that doesn’t mean they can’t be good stallions. He hasn’t got huge numbers out here but hopefully he’s got enough to give him an opportunity. It didn’t stop Night Of Thunder, and it didn’t stop a few others.”

Night Of Thunder  (Dubawi) – who shuttled to Darley in just the 2016 season for 96 covers – has left five stakes-winners including Queensland Derby (Gr 1, 2400m) winner Kukeracha, and three-time stakes-winner Cherry Tortoni.

“I think Ribchester was a good fit for Huanui, and hopefully he’ll be a presence either there or here in the future,” Pulford said.

Aside from Outdoor’s form through Trekking, and the physicals of mating her with what Pulford calls the “beautiful, scopey” Ribchester, there was the allure of Iffraaj over Outdoor’s grandsire Danehill (Danzig). It’s Iffraaj’s best nick in Australia via three stakes-winners (from 15 runners and 11 winners) and has spawned the trans-Tasman three-time top-flight winner Turn Me Loose, and the exceptional mare Chriselliam, a top-level winning miler in Britain and the US.

“Serenade Rose was a talented mare with a lot of quality in her pedigree, and then in Outdoor, Ribchester probably needed that quality mare,” Pulford said.

“The resulting foal, Plymstock, is a very good looking filly who looks like she’ll go on to bigger and better things. And we’ve got about half a dozen Ribchesters and the trainer (James Cummings) holds them in very high regard.

“Hopefully Ribchester can throw one half as good as he was.”