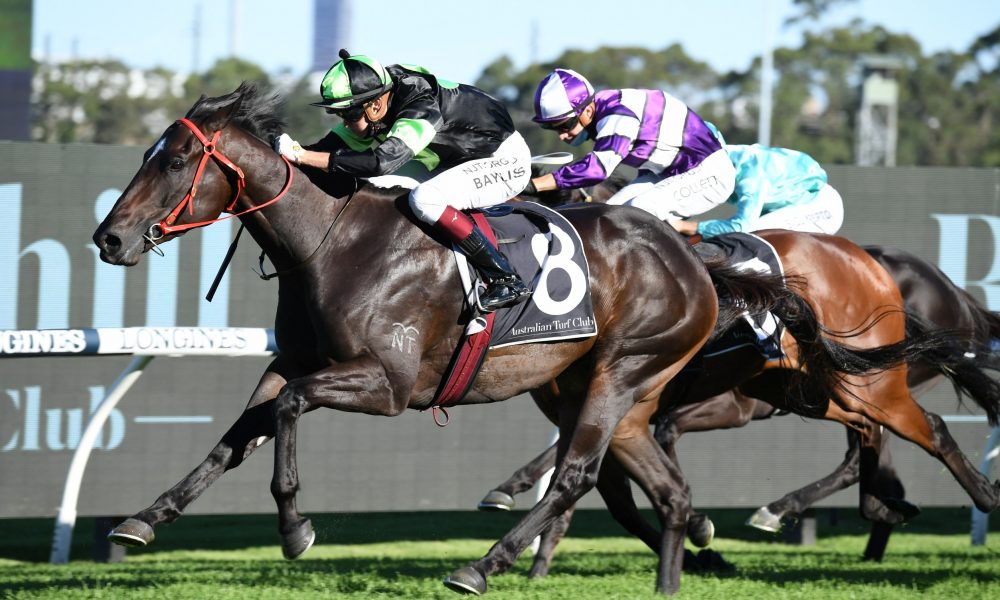 Making racehorses is all about the mother, a lot of people say. It’s just that sometimes you’ve got to look through the dam to see the quality. Or perhaps straight over her, as you could in this case.

Private Eye took another major step in what’s becoming a very promising career by winning Saturday’s Queensland Guineas (Gr 2, 1600m) at Eagle Farm. After a Listed second at Randwick in his black-type debut the start before, the Joe Pride-trained gelding made it six wins from nine starts by flying home from last for an emphatic three-quarter length victory.

Private Eye is by the son of Danehill, Al Maher, out of the Shamardal mare Confidential Queen. The dam was presented at a broodmare sale in 2015 as a mare with some quality relatives, such as Snitzel and Hinchinbrook, sons of her second dam Snippets’ Lass.

There were only two problems: Confidential Queen couldn’t run very fast at all. Trained by Danny O’Brien, she had three starts, in country Victoria in 2014, and came ninth, eighth and ninth.

Aside from that, or probably related to that, she wasn’t very tall either. Tiny, in fact, to the point where you might confuse her for a whaler on a dim night.

That was most likely what led to her yielding just $21,000 at the Magic Millions National Yearling Sale of 2013, but neither size nor her race record stopped Kerri Tibbey when she saw the then three-year-old offered at the Inglis Broodmare Sale of 2015.

The owner of Goodwood Farm, a 500-acre patch of rolling hills on the Pages River at the northern tip of the Hunter Valley, Tibbey liked Confidential Queen’s family, and was a big fan of Shamardal mares.

“I liked the page and I liked her on type,” Tibbey, who owns around 15 mares, tells It’s In The Blood.

Into the bargain, Confidential Queen was in foal to Star Witness. There were just a few hands raised, however, and Tibbey came away with her for just $13,000.

“I thought she was a bargain really,” she says. “I was surprised she was so cheap. I sat at the sales for ages, looked at the pedigree and looked at the mare, and was able to get her – and in foal to Star Witness.”

Though surprised by the price, she did know the reason.

“She’s very small,” she says. “I mean really small.” How small? “I don’t know. I’ve never had her measured. I think it would be too depressing.”

Eventually we come to an estimate of around low 15-hands (possibly mid-15s if she’s standing on a book). But that’s not the main factor with Tippey, who’s had Goodwood for more than 20 years. The strengths of pedigree and type should balance out, but moreover, so should the horse.

“Even though she’s small, she’s perfectly balanced,” she says. “She’s light on her feet but has great length of rein for a small mare. Sometimes they can have tiny little necks and pig heads, but she doesn’t. She has a really nice length of rein and a kind head, her legs are good and she’s really strong behind.”

Strength is a trait entwined with Tippey’s faith in Shamardal mares.

“I think he’s an exceptional broodmare sire,” she says. “He throws great types, and Shamardal mares are really tough. Plus, you don’t have much trouble mating them, since Shamardal is Danehill-free.”

Six months after buying her, Tippey watched her little mare give birth to her little Star Witness colt. As a November foal, he was held up for more development until the 2017 Magic Millions National Yearling Sale, where he fetched a fair $60,000. Royal Witness has since punched above his weight. A Sydney winner before a switch to Brisbane, he’s had six wins from 32 starts for more than $360,000 in earnings so far.

Tippey knew she had to carefully manage her mare, so she next looked to Al Maher. He was not the most fashionable sire, standing at Emirates Park, near Goodwood Farm, for $16,500. His average yearling price was a modest $40,000 at the time (though it’s bumped up to $67,000 now), but Tippey was unhesitant.

“The first foal was pretty small, and so I needed a bigger stallion with a bit more bone and a bit more size,” she says.

“I’d always liked Al Maher, always thought he was a good stallion. I used to work for Emirates so I knew him quite well. He wasn’t the most commercial stallion around but I was after good knees, good legs and a little bit of height.”

In August, 2017, Confidential Queen bore the colt who would be Private Eye, who was “a lot bigger” than Royal Witness. Tippey chose the Adelaide Magic Millions Yearling Sale of 2019 – mostly because not many sales were that keen on Al Maher at the time – and reaped $62,500.

She returned to Al Maher but this time the foaling – of a bigger-again colt – went not so well, with Confidential Queen suffering a haemorrhage in the uterus, which preceded a year off. Compounding that issue, the colt fetched only $16,000 at last year’s Adelaide sale, sold to NSW country trainer Gregory McFarlane.

Confidential Queen is now in foal again, to Shalaa, the current third-place holder on Australia’s first season sires list thanks to the likes of Shaquero.

“He should suit her. Now that she had problems foaling, you’re looking for something not terribly wide in the shoulders, because it’s getting the shoulders out that usually causes the problems,” she says. “Shalaa has certainly got the height we need, but he’s not as heavily built as Al Maher.”

Looking back, Private Eye’s third dam, Snippets’ Lass, was a gem of the breeding barn. Her second foal was Snitzel, the outstanding sprinter and monolithic sire who needs no introduction here. A sister, dual stakes-winning mare Viennese, was her fifth named foal. Seventh and last was Hinchinbrook, the dual stakes-winning and multiple G1-placed sprinter, whose promising stud career was cut tragically short.

Fourth out was the mare Royal Snippets, by Royal Academy. She was a city winner, at Sandown, and won two of 13 before retirement. Confidential Queen was first out of her four named foals. Second was King’s Troop (Redoute’s Choice), a city winner who was second in the 2015 San Domenico Stakes (going one place better than his three-quarter brother Snitzel did in the same race 10 years earlier).

After more than 20 years at Goodwood, which has reared the likes of Flying Artie, Dance Hero and Rebel Dane, hopes are high that, thanks to some by-necessity careful sire selection, Tippey may have bred a star in Private Eye.

“Every mare has different things you have to take into account when doing your matings, and we did have to choose carefully with Confidential Queen. But half of it is luck as well,” Tippey says with a laugh. “Still, it looks like we’ve been pretty lucky with Private Eye.”

Trevor Marshallsea is the best-selling author of Makybe Diva and Winx – Biography of a Champion.