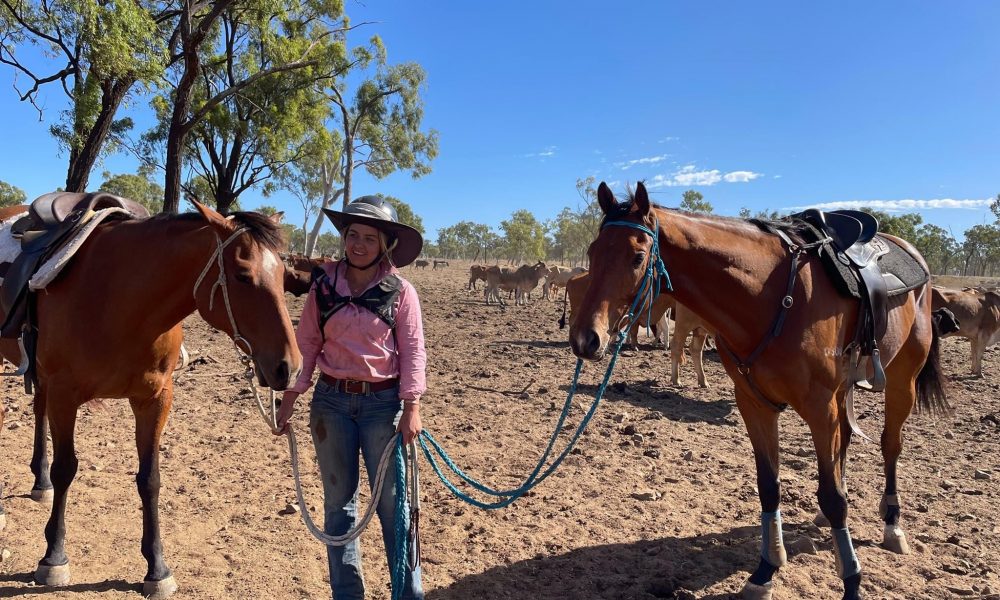 While some of the country’s fastest racehorses will attempt to scale The Everest (1200m) on Saturday, a much slower retired thoroughbred from Hong Kong called The Submarine (Acclamation) conquered a mountain of a different kind last week.

The four-year-old Irish-bred gelding, beaten a combined 61 and three-quarter lengths in four Hong Kong starts, won the Racehorse to Ranch Horse competition, a new initiative aimed at showcasing the versatility of off-the-track thoroughbreds during the inaugural and highly popular ‘Cowgirls Gathering’ in Queensland.

Ten combinations were selected to take part and riders had just 100 days after the retirement of their horses from the racetrack to train them, accomplishing everything from rope a cow, drag heavy logs and perform a freestyle reining pattern.

Jane Moore, who owns and runs a 50,000-acre cattle operation 140 kilometres north of Charters Towers in North Queensland, was contacted by her sister-in-law Amy Taylor, the brainchild of International Thoroughbred Retirement (ITR), to see if she might be interested in trying her hand in it with a retired horse from Hong Kong.

Moore, a highly accomplished horsewoman who once rode trackwork for Helen Page on the Gold Coast to fund her university studies and has trained and ridden performance horses in Canada and Europe, gladly took up the challenge.

Just a few weeks after The Submarine, or ‘Subbie” as he’s more fondly known, arrived from Hong Kong, he was trucked thousands of kilometres to her property to begin his rapid transformation to becoming a ranch horse.

Suddenly Subbie found himself in a completely foreign environment surrounded by cattle and harsh wide-open spaces, a far cry from his former existence in the chaotic landscape of Hong Kong.

Naturally, it did take him a bit of time for the horse to adapt and she distinctly remembers the first day she rode him around cattle.

“That was hilarious. He blew up like a giraffe. He whinnied at them. It was very funny,” Moore said. “They were fresh weaners and the dogs rushed up behind him and he exited stage left, and quickly, which took a bit of riding.”

It wasn’t long before the penny dropped for Subbie and he became an integral part of the station’s mustering team. On occasion, he’s covered up to 30 kilometres under saddle trailing 800-head mobs of cattle.

Although somewhat bizarre for a horse from Hong Kong to find himself in remote Australia chasing cattle, we can’t forget that years ago thoroughbreds were commonly used as workhorses on properties all over the country.

And to this day, thoroughbred blood still runs heavily through the veins of many Australian stock horses.

“I love the thoroughbred. I love their mind,” Moore continued. “They were the traditional stock horse in the day. The majority of stock horses in station plants were three-quarter thoroughbreds. People forget that they are smart, athletic, and fast and go all day.”

Subbie was trained by Me Tsui and, after failing miserably in four starts, was retired and shipped to Australia to begin his new life in Queensland cattle country.

“He’s broken a lot of paradigms for me.”

All that exposure and experience provided him with an ideal grounding for the Racehorse to Ranch Horse competition. But winning the initiative was still no easy feat with Moore and Subbie having to compete against a number of highly talented riders and horses.

While Moore says the result itself was a thrill, the greatest satisfaction was actually getting the horse there and being able to prove the adaptability of the thoroughbred.

“We put the horses first and consequently they gave and shone in ranch versatility, crossing wooden bridges, dragging logs, side passing everything, and roping.

“They all performed and that was fantastic. They might not have been doing sliding stops and spins but there’s a really good chance they will with time and patience. They are so athletic and have such good, easy minds.”

Subbie’s success in this obscure pursuit has intrigued his internationally-based owners and breeders and also made them very proud.

“The level of interest and support it has attracted is incredible. His breeders in Ireland have contacted me and expressed their joy that he’s found a good home. It’s a big thing to put a Hong Kong horse through this,” Moore continued.

His efforts have also been a hugely important outcome for the International Thoroughbred Retirement adoption program which, since its inception in 2016, has successfully re-homed 100 Hong Kong-trained horses.

“It’s the first time we have had a horse do this type of work as they usually go into dressage, jumping or pleasure,” said ITR’s founder, Amy Taylor.

“Thoroughbreds have such a bad reputation with people thinking the slow ones end up with bad outcomes.

“Subbie is a good poster boy for us at the moment and proves you can train them up to do anything.

“The story of Subbie highlights the hugely positive impact a slow racehorse can have in its life after racing and it doesn’t necessarily have to be in elite-level eventing, jumping or dressage.”

As for Subbie’s future, it looks more than certain he will live out his days on the cattle station with Moore filing for his adoption papers from ITR.

“He’s enjoying a well-earned rest in the paddock and we might bring him back to do some camp drafting and cow horse events,” Moore said.

Subbie is not only a “poster boy” for ITR. Along with the nine other horses that took part in the Racehorse to Ranch Horse event last week, he might have just started a popular new pursuit for retired thoroughbreds.