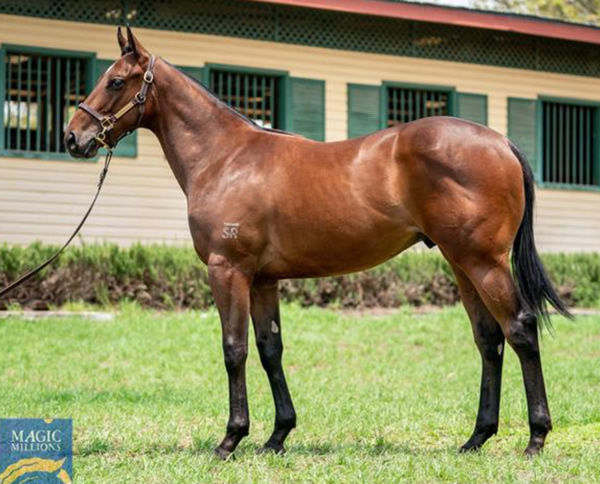 The purple and white colours of Coolmore partner Derrick Smith have been carried by some of the operation’s biggest stars, including Australia (Galileo), Camelot (Montjeu), Cape Blanco (Galileo), Fame And Glory (Montjeu), Magical (Galileo), Minding (Galileo) and St Nicholas Abbey (Montjeu), as well as Australian acquisition So You Think (High Chaparral).

However, they are very rarely seen in Australia, especially on locally-trained runners.

In fact, according to Racing NSW records, the only horses to sport the purple and white in Australia have been the Aidan O’Brien-prepared Septimus (Sadler’s Wells), Honolulu (Montjeu), Highland Reel (Galileo), U S Navy Flag (War Front) and Ten Sovereigns (No Nay Never). The first two contested the Melbourne Cup (Gr 1, 3200m), Highland Reel ran third in the Cox Plate (Gr 1, 2040m) and the latter pair were seen in Sydney in the $15 million The Everest (1200m).

Adelaide (Galileo) and So You Think both wore the purple and white abroad, but never in Australia.

All of which points to how rare it was to see the Smith colours in action at a nondescript midweek meeting at Warwick Farm yesterday. However, if the impressive win of Ranch Hand (Fastnet Rock) is anything to go by, they are likely to be seen far more often on the road to the Golden Slipper Stakes (Gr 1, 1200m).

Ranch Hand is one of three horses with Smith’s Wynaus as managing owner who is currently in the care of Sydney trainer Chris Waller. The other two, Peacemaker (American Pharoah) and Warminster (Pride Of Dubai), are both spelling.

Purchased by Coolmore Australia principal Tom Magnier for $260,000 from the draft of the Ramsey family’s Turangga Farm at this year’s Magic Millions Gold Coast Yearling Sale, Ranch Hand looked every bit the professional when stepping out for the first time at Warwick Farm yesterday.

Sent out as the $5 second favourite behind Golden Gift (1100m) placegetter Mura Mura (Not A Single Doubt), who started the $2.80 elect, Ranch Hand jumped fairly and was ridden midfield by James McDonald, only three lengths off a fairly sedate tempo over the 1000 metres.

When Mura Mura slid through to lead at the 500 metres, though, the pace increased and Ranch Hand was quickly ridden up and asked to improve. While many horses would flounder in that situation, Ranch Hand thrived and, when McDonald switched off the leader’s heels at the top of the straight, he quickly raced up to challenge for the lead.

For a few strides, Mura Mura knuckled down to her task, going to battle with the colt, but she surrendered at the 200 metres as a green Ranch Hand raced on by.

At the line, he had three and a quarter lengths up his sleeve over Mura Mura, who just held off the fast-finishing Godolphin debutant Honeycreeper (Teofilo) for the runner-up position.

Ranch Hand is the second named foal but the first to race out of Caulfield winner Mezulla (Shamardal), who herself was the only named foal out of Eight Carat Classic (Gr 2, 1600m) runner-up Vamperalla (Kashani).

While there is little to write home about close up in his pedigree, with the first black type winner coming under his fourth dam Agbar (Silver Dream) – that being Kelt Capital Stakes (Gr 1, 2040m) winner Just Call Me Sir (Clay Hero) – it is the extended family of last year’s Magic Millions 2YO Classic (RL, 1200m) winner Away Game (Snitzel), Randwick Guineas (Gr 1, 1600m) victor Inference (So You Think) and New Zealand 2000 Guineas heroine Facing The Music (Sackford).

Waller yesterday would not rule out trying to keep the Magic Millions 2YO Classic in the family, so to speak, with Ranch Hand potentially bound for the Gold Coast feature next month.

“The horses that have raced seven days prior to the Magic Millions look to have a pretty good record so we won’t say no, but at the same time we won’t ruin his career just to get there,” Waller said.

“I will have a talk to the owners, see how the horse pulls up and make a decision next week.”

Whether Ranch Hand ends up there or not, there is little doubt that the purple and white will be seen victorious again sooner rather than later.

Behind The Scenes: Maiden Of The Week

Maiden Of The Week is one of ANZ’s longest-running and most popular weekly features.

The title is coveted by any maiden winner and their connections and is often touted as a sign of respect well before stakes races beckon.

Over the last two years, up to Ranch Hand (Fastnet Rock) today, there have been 105 horses who have been named Maiden Of The Week.

The majority have broken their maiden on New South Wales tracks (47), with Victoria (33) and New Zealand (20) also featuring heavily. There have also been maiden winners from Queensland, South Australia and Western Australia.

In that time, the Maiden Of The Week has been awarded to two horses who broke their duck at Group 1 level: Australasian Oaks (Gr 1, 2000m) heroine Toffee Tongue (Tavistock) and Victoria Derby (Gr 1, 2500m) sensation Johnny Get Angry (Tavistock).

Perhaps most notably, though, are the two winners of the world’s richest turf race, The Everest (1200m), who are still listed as “just” Group 2 performers even though they have taken arguably the best sprint race on the planet. Yes Yes Yes (Rubick) and Classique Legend (Not A Single Doubt) were both awarded the Maiden Of The Week title within weeks of each other to kick off their careers.

Three other Group 2 winners also make an appearance on the list over the past two years – Dame Giselle (I Am Invincible), Cherry Tortoni (Night Of Thunder) and Mamaragan (Wandjina) – while there are 17 Group 3 winners and 12 who were successful at Listed level. Among that bunch is Magic Millions 2YO Classic (RL, 1200m) victress Exhilarates (Snitzel).

Of those who have not won a Group 1, eight have been placed at the highest level: Yes Yes Yes, Mamaragan, North Pacific, Cornflower Blue (Savabeel), Swats That (Shamus Award), Hanseatic (Street Boss), Aysar and Vangelic (Vancouver).

As far as sires represented over the past two years, there have been 53 individual sires who have had a Maiden Of The Week awardee.

Just like the Australian general sires’ premiership, it is a battle between Snitzel (Redoute’s Choice) and I Am Invincible (Invincible Spirit) for leading honours, with the Arrowfield Stud stallion just prevailing with nine representatives: Archanna, Battleground, Birdsong, Cultural Amnesia, Exhilarates, Kumasi, Paris, Philizzy and Safe Passage.

So how is the Maiden Of The Week chosen?

The brains trust consists of Sydney-based Ken Boman and his New Zealand counterpart Lloyd Jackson, both with decades of experience between them. They collaborate for ANZ’s race analysis for stakes races, as well as some two-year-old events, and they submit a short list from which the Maiden Of The Week is chosen.

“As we are looking for horses with potential for better things, we focus on younger horses – so mainly two-year-olds or three-year-olds,” Boman said yesterday. “There are many things that we look at from the time they enter the yard until they are back in their box.

“I look for a nice type in the yard, ideally by a successful or promising sire; I also check the sire of the dam. I do prefer a lightly raced or unraced horse.

“During the race, I will watch their action, their manners and generally the way in which they travel in the race. I will then watch for their acceleration in the straight.

“Really, it all comes down to attitude, action and manners, especially over the latter stages. I’ll also look at the way the horse went to the post, which can suggest preferred distance.

“Post-race, I will analyse their overall time and sectional times and evaluation of the class of the race before submitting my thoughts.”

Jackson undertakes a similar process with horses across the Tasman.

“I look at winning margins and the ease of their win,” he said. “Ideally, they are on debut or at worst a placing or two in two starts prior to the win.

“I agree with Ken in that two-year-olds or three-year-olds are favoured, while stakes wins on debut get special attention. However, if the win is on a heavy track, I am wary.”

While their success rate in recent years has been strong, Boman says that it was a Chris Waller-trained filly that was selected back in June, 2014 that remains his proudest choice.

“Clearly the standout was Winx,” Boman said. “She was named a Maiden Of The Week after she finished strongly to win a two-year-old race at Warwick Farm on debut in June, 2014, and we all know what she did after that.

“Naturally, it is always nice to come up with a horse that does go on to be highly successful but not always that easy to achieve.

“In more recent times, Classique Legend is probably the standout after his win on debut in a three-year-old maiden on the Kensington track in March last year, while I do think that recent Maidens Of The Week Acrobat and Paulele really appeal; they look to have considerable potential.”

Adds Jackson: “I only wish I could identify them before the race!”

Maiden Of The Week will return in the first edition of 2021 on New Year’s Day.