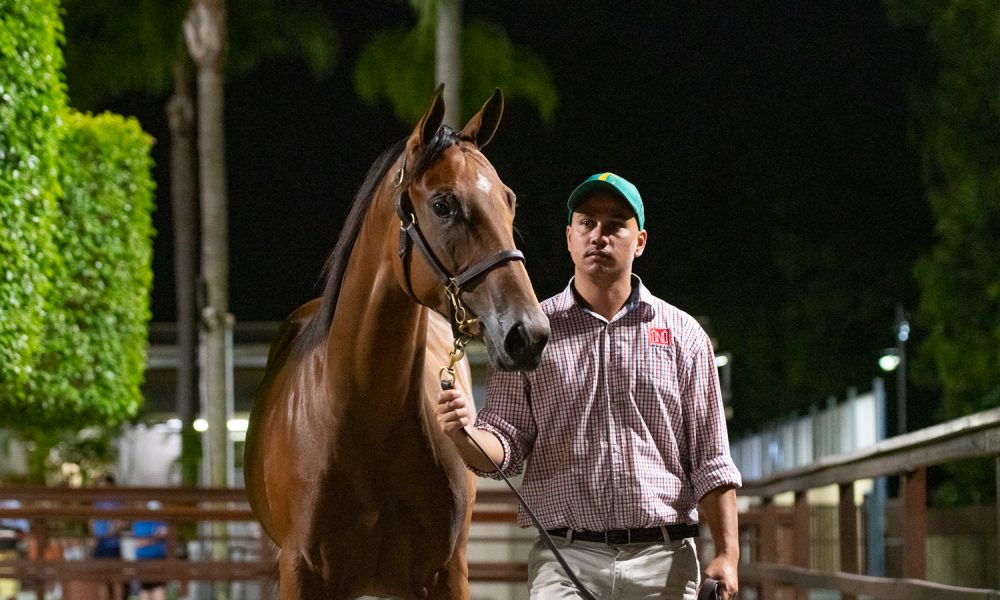 A booming finish to Book 1 of the Magic Millions Gold Coast Yearling Sale last night, in which four lots hit the million-dollar mark to create an auction house record and set new benchmarks for established and fledgling vendors, has left one of the key personnel behind the first sale of 2022 gobsmacked at its success and the overall demand from the market.

The previous benchmark of 12 million-dollar horses had already been surpassed on Friday which saw three seven-figure yearlings exchange hands, but a further four reached the mark during the condensed 93-lot post-races session, for a total of 19 $1 million plus lots in an extraordinary 2022 sale.

Magic Millions managing director Barry Bowditch, even if he was more bullish in his private beliefs compared to his public pre-sale predictions, was last night lost for words over how the Book 1 sale had transpired.

“I’m speechless. It’s been fantastic from start to finish. It’s been an outstanding team effort to navigate ourselves through this and to get the dream result is something fantastic,” Bowditch told ANZ Bloodstock News.

“To the vendors, to get their support and to be able to facilitate the sale to the level we have is something quite extraordinary.

“Whatever way you look at it, it’s a record sale, it’s a significant sale; it’s a benchmark sale of Australasia, if not the world, when it comes to a yearling sale these days and we’re thrilled to be able to start 2022 in the manner we have.”

Rival Inglis will be waiting for its sales ring right of reply, starting with the Classic auction in three weeks’ time, but there is little doubt the depth of the market experienced at the Gold Coast has set the tone for not only the Magic Millions Book 2 offering today and tomorrow, but for the remainder of the yearling sales season across Australia and potentially New Zealand.

“The industry’s in great shape. The economy, there’s pent-up demand for houses, cars and boats, and horses fall into that category,” Bowditch said.

“People are enjoying our industry, our prize-money’s fantastic, the Magic Millions brand has never been stronger and it’s the perfect storm when it comes to all that.

“There’s a lot of faith and trust in what the buyers think of our catalogue and the success they’ve had out of it in recent years.”

For Newgate Farm, who parted with an auction-high $1.9 million I Am Invincible colt on Thursday and capped its sale with a $1 million Snitzel (Redoute’s Choice) filly last night, the fourth seven-figure yearling from their 2022 Gold Coast draft, the breakout results signifies another important milestone in the Hunter Valley stud’s rise from start-up to powerhouse.

“It’s been extraordinary. We’re absolutely so thrilled. Barry Bowditch just alerted me to the fact we’re the highest-grossing vendor in the history of the Magic Millions, which is something we’re so proud of,” Field said last night.

“Our whole team at Newgate, headed by Jim Carey, they’ve worked so hard day-in, day-out, raising these horses from the day they were conceived to the day they were born, through to walking through the sales ring and, my goodness, I couldn’t be prouder.”

Those that have observed the astute Field go about the establishment of Newgate from a pinhooking venture, to a stallion farm, to large-scale consignor, would not be shocked by the trajectory of the stud, but the speed and impact is quite remarkable.

Field himself credited his business partners, S F Bloodstock’s Gavin Murphy and Matthew Sandblom, for their guidance and belief in the Newgate business model.

“We’ve built a wonderful farm, we’ve built a great staff, built a magnificent broodmare band and, most importantly, the farm is producing so many great racehorses on the track, and I’m just so proud to see our owners, our partners Matthew Sandblom and Gavin Murphy, reap the benefits with the wonderful sales we’ve had,” he said.

“But also all of our owners from Newgate who’ve supported us from day dot. It’s quite an extraordinary sale and we’re so proud of the results we’ve had.”

Newgate Farm also sold million-dollar colts by Pierro (Lonhro) and Deep Field (Northern Meteor), the sire’s first, and rounded out a big sale by selling a Snitzel filly to A List Stud for $1 million.

The filly, catalogued as Lot 917, is the first living foal out of Listed winner Divine Centuri (I Am Invincible), a mare Newgate purchased for $360,000 in 2017. She will be trained by A List Stud’s Chris Lee’s private Gold Coast-based trainer Allan Chau.

Another prominent Hong Kong owner Tony Fung also signalled he was as engaged in Australian racing as ever by adding a $1.05 million Snitzel colt in the closing minutes of the record-breaking sale, taking his tally to 16 for a spend of $5.97 million.

The Snitzel colt, offered by Arrowfield Stud as Lot 930, is the third foal out of Dream Date (Starcraft), herself a half-sister to top stallion Not A Single Doubt (Redoute’s Choice), also the sire of Fung’s Golden Slipper winner Farnan.

“We are not sure of the trainer yet. He was one of our picks of the sale. He’s athletic, a beautiful-moving Snitzel colt,” Fung’s racing manager Sally Williams said.

“We’ve obviously assembled a really good group of colts. I am not going to pick one as a standout, but he was one of our favourites, and hopefully we will see him back here (for the race) next year.”

He was purchased by James Harron’s colts partnership, the agent’s fourth and highest-priced for the group of investors.

An emotional Rae-Louise Kelly of Fernrigg Farm was ecstatic with the big sales ring result for the Denman operation which is fast creating a reputation for raising quality horses, having sold Magic Millions 2YO Classic runner Cusack (Not A Single Doubt) last year, as well as the 2021 winner of the race, Shaquero (Shalaa).

“That was unbelievable. We bought the mare three years ago and she lost her first foal. We put her in foal to Exceed,” Kelly said.

“We knew when he was born he was something special. His reserve was $300,000, so that just completely blew us (away).”

The son of Exceed And Excel, who has top-class sprinting sire sons Bivouac and Exceedance at stud, also provided a massive return on investment for vendor Fernrigg Farm who outlaid $220,000 for his dam, US turf Listed winner Devious Rumor (Street Boss), at the 2019 Magic Millions National Sale.

The underbidder played their first and only hand at $1 million, but Harron, amid some confusion from the rostrum, had a decision to make about how to best successfully ward off his competition. He did that by placing his next bid, which would become the final one, at $1.2 million.

“You’re always a bit anxious waiting on Saturday night, it’s never a time when you want to buy a horse … but he was a colt when we first saw him who went to the top of the list,” Harron said.

“He’s a very sharp horse with a fantastic attitude. Every time I saw him he handled himself brilliantly.

“He’s a great shape, great movement and Exceed And Excel needs no introduction and he’s out of a speedy American mare, so he suits our colts fund down to the ground.”

Another buyer whose patience was rewarded last night was Sheamus Mills who purchased a daughter of champion stallion Lonhro (Octagonal) for $1.05 million, joining the agent’s growing portfolio of valuable fillies.

She was the 16th million-dollar lot of the sale – and the agent’s second seven-figure filly of the auction having also paid $1.55 million for an I Am Invincible (Invincible Spirit) filly sister to Listed-winning juvenile Najmaty on Wednesday – but Mills revealed he had to bide his time to ensure he had the bank to buy the standout daughter of Lonhro.

“I have seen a lot of Lonhros in my time and I have never seen a Lonhro look like that,” Mills said.

“The substance, the walk, the attitude. I think a lot of it comes down to (broodmare sire) Not A Single Doubt.

“It basically comes down to the best Not A Single Doubt you’ve ever seen with the skin colour of a Lonhro. It’s the perfect combination of a sire and a damsire.”

Offered by Widden Stud as Lot 877, the filly is the first foal out of stakes winner Cool Passion (Not A Single Doubt), a half-sister to the Listed winner Havana Wind (Spinning World).

Starting her career in Western Australia where she won eight races for trainer Justin Warwick, upon joining Tony McEvoy she would win another three races, all at Group 3 level, and was runner-up to Spright (Hinchinbrook) in the Robert Sangster Stakes (Gr 1, 1200m) at her second-last race start.

“I kept inspecting the shortlist over and over and I just kept coming back to her. I was looking at certain other horses and I was saying, ‘that looks like a ten furlong horse and that one looks like a six furlong horse’, this is probably the only horse I looked at where I thought what distance, but she should be good,” Mills said.

“I loved everything about her, to be honest. I bought a couple of horses during the week but I also stayed off a few in order to get her.”

In recent years Mills has been investing in high-end fillies at the yearling sales for clients, with a view to racing and then breeding from them, a strategy which has already produced Group 1 winner Odeum (Written Tycoon) as well as a number of other valuable fillies and the acquisition of a Lonhro filly will no doubt add diversity to the portfolio.

Ciaron Maher and David Eustace were the leading buyers at the Book 1 sale, taking home 47 yearlings, either outright or in partnership, for a combined spend of $21.055 million. Gai Waterhouse and Adrian Bott bought 37 yearlings while the China Horse Club-Newgate syndicate bought 20 yearlings.