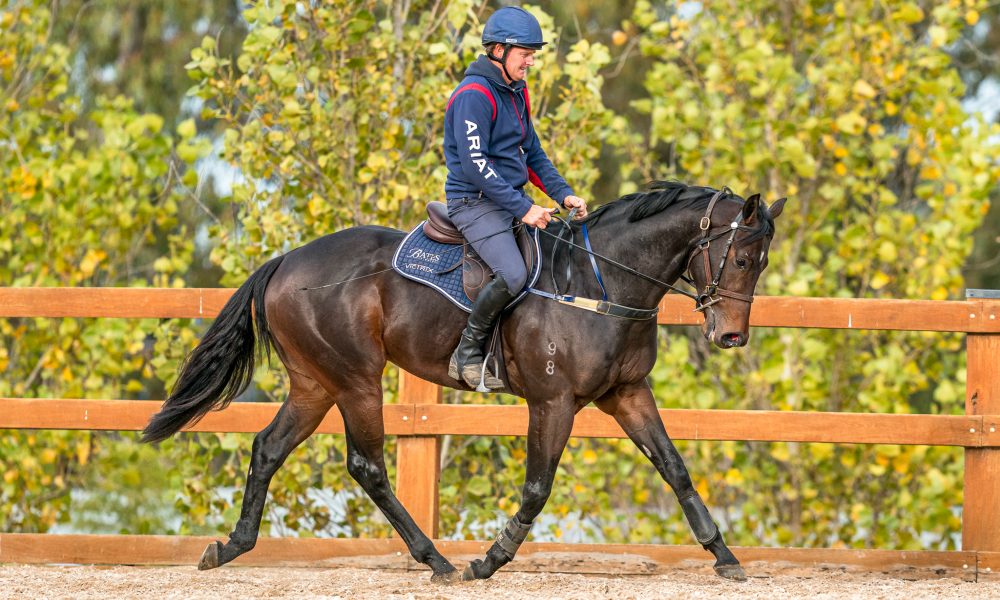 Throughout this month ANZ Bloodstock News’ Jo McKinnon talks to some of the great horse men and women who are making a big difference behind the scenes to the development of some of the country’s top racehorses. A number of high level equestrian riders are playing their part in bettering their education and subsequent on track performance. Our first subject in the series is Blair Richardson. Based at Scone, he has recently been working with the likes of Captivant and Profiteer during their winter breaks.

Cast your eyes over Group 1 winning two-year-old Captivant (Capitalist) at the moment and he could easily be mistaken for a high-level equestrian horse.

The valuable colt and future hope for the Newgate Farm stallion roster is currently doing some off-season training with top eventing rider Blair Richardson at his property at Scone and is relishing the experience.

“He is a beautiful horse to ride. I look at him and think he has a lot of scope. The first couple of days here he was above the bit but he is a very intelligent horse and now he’s going like I could do a one–day event on him. He could do a dressage test, he’s working very well on the flat,” said Richardson.

Richardson broke in Captivant and is so enamoured with the big, elegant dark bay, who stands 16.2 hands high, that he openly admits it will be hard to hand him back over to the Snowden Racing team for his spring racing preparation.

“He certainly ticks all the boxes as an equestrian horse. He’s probably a stable favourite, even with our staff. He’s got a lovely temperament and personality to work with,” Richardson said.

“He’s a magnificent horse and I’m sure when he goes to stud he is going to be a stunning stallion.”

With his wife Nikki, who was a member of the Australian eventing team at the 1996 Atlanta Olympics, New Zealand–born Richardson started his equestrian operation Vantage Hill in the heart of Australia’s horse capital 12 years ago.

“We use our equestrian skills and do what we love doing which is riding horses and enjoy it,” he said.

“It’s great to be able to put something back into another sport and I think the racing industry can benefit a lot. There’s a number of equestrian riders getting into the racehorses now.”

Specialising in pre-training and breaking, Blair and Nikki’s supreme horse skills have become highly sought after by some of the biggest racing and breeding operations in Australia, including Newgate Farm, Widden Stud and Attunga Stud.

Captivant is not the only high–profile horse that has passed through their stables of late. Inglis Millennium (RL, 1200m) winner Profiteer (Capitalist) has also paid a visit.

“Even though he’s also by Capitalist, he’s a different type of horse to Captivant,” he said. “He was fun to work with, he is an athlete, an energetic horse and he’s obviously just fast.

“He’s lovely to ride but he was ready to go, he’s that type of horse that’s just an energetic athletic and smaller type.”

At peak times Vantage Hill, which is set on 85 acres, has up to 70 racehorses in various forms of training to ultimately enhance their performance on the racetrack.

“A bit of flat work from trained equestrian riders is very beneficial to horses. When we ride them we are not bridged up in a pad and we can ride them around off our leg and ride them long and give them a kick and ride them forward, and trainers are seeing the benefits of this,” said Richardson.

“It educates them and teaches them to use different muscles.”

Richardson applies similar training principles to the yearlings placed into his care.

“All our breakers go to the equestrian arena on week two and ride circles and figure eights, and we educate them on the flat before we ride them on the track,” he said.

“We have the Middlebrook Creek running through the property and the ducks fly off it and our young breakers have to ride through creeks and it’s very challenging for them.

“It allows you to ride them at something natural. Our track is a fair distance from the stables so by time we ride back and up to the barn it does take a while, which is good for the breakers because you are on their backs for longer.”

Another key aspect of their training is being put through a set of barriers Richardson has specially set up.

“There’s an 800-metre sand flat track to pair the breakers up. We have barriers and panels and educate them and do ins and outs,” he said.

“We pair them up and send them around so horses get used to having others move from one side to the other, which we try to do as much as possible before they head to the trainers.”

It is a real family affair at Vantage Hill with Richardson’s 15-year-old son Charlie, himself a talented three-star level eventing rider, helping out when he can between his school commitments.

“He broke in his first horse, a Lonhro filly during his last school holidays and he rides a lot of pre-trainers for us,” Richardson said.

Although kept very busy working with all the young racing stock that is sent to him, 45-year-old Richardson manages to make the time to keep up his involvement in equestrian sport and regularly competes on weekends.

While the racehorse trainers are all looking for the next Group 1 winner, he’s searching for his own “big” horse that might take him to the pinnacle of eventing.

“I am still young enough, I have got 20 years left in me so I’m still looking for the next horse and trying to produce them,” he said. “I have a horse by Dawn Approach that has got up to one–star level. He’s a five-year-old, a lovely mover and nice horse on the flat, so we will see where he goes.”