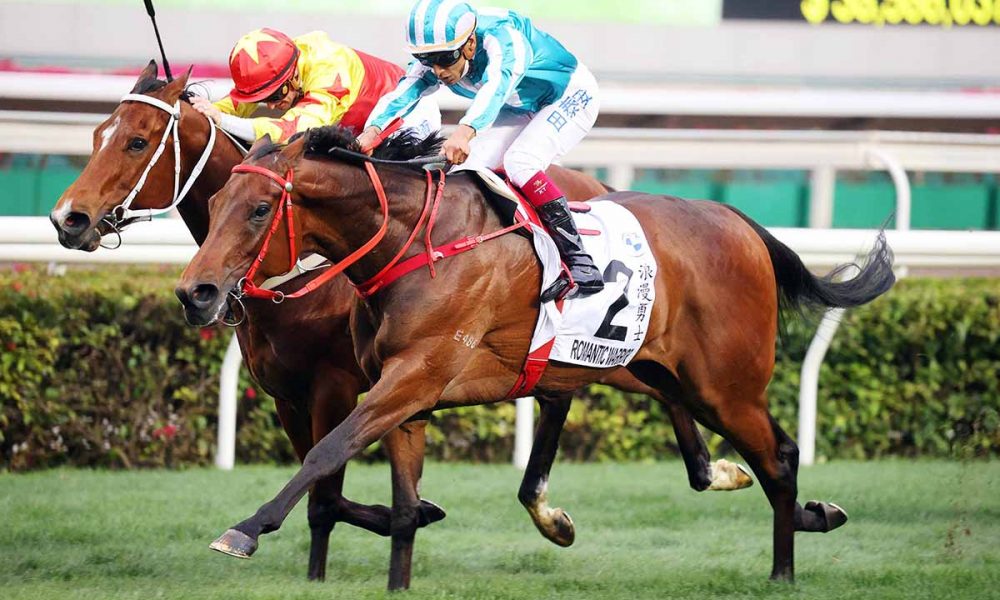 Purchased at the June 2021 sale for HK$4.8 million by owner Peter Lau on trainer Danny Shum’s recommendation after being originally selected out of the 2019 Tattersalls October Yearling Sale by former champion Irish jockey Michael Kinane, Romantic Warrior took his career earnings to HK$24.8 million (approx. AU$4.26m) with his sixth win from seven starts.

Providing Shum with his first success in Hong Kong’s most coveted race after placings with Thumbs Up (Shinko King) in 2009 and Playa Del Puente (Etzaam) in 2020, Romantic Warrior edged out California Spangle by a head after a desperate battle between the two highest-rated horses in the field. Money Catcher (Ferlax) was third, two and a quarter lengths away, in a slick 2m 00.23s.

“He (Romantic Warrior) deserved to win the Derby, he is a very honest horse and very consistent. Karis (Teetan) did a great job, so I’m very happy,” Shum said. “The second horse, California Spangle also ran very good. The pace was strong and he was still fighting on the line.”

As the two-best performed horses in the Four-Year-Old Classic Series squared off as Romantic Warrior emerged from the ruck to challenge California Spangle in the straight, Shum retained complete faith in the Acclamation (Royal Applause) gelding.

“I thought he could run very well in the Derby after the Classic Cup – he was four-wide but still finished fourth. It was a good run and he learned a big lesson. I was confident going into the Derby because he’s an easy ride, he doesn’t fight during the races. If it’s a good pace, he doesn’t fight; if it’s a slow pace, he can go a little bit further forward,” Shum said.

“My next plan is the Queen Elizabeth II Cup because there are no overseas horses coming and it’s the right time for him to fight the experienced horses. He can still improve this horse. If he wins, I’ll be happy but if he runs in the first three or four, I think it will be a good lesson for him to improve himself,” Shum said.

Revealing he had told owner Peter Lau that Romantic Warrior was the only Hong Kong International Sale entry which had taken his eye during inspections, Shum said the bay gelding was the stand-out from the sale.

“I would like to thank the Hong Kong Jockey Club as well for bringing this horse into the International Sale. Actually, the CEO (Winfried Engelbrecht-Bresges) also said to me in the stable ‘This is the right one’, so we picked the same horse.

“Thank you to the owner Peter Lau for really supporting the ISG Sale. He always says, ‘You can buy me a good horse, but don’t buy me the wrong horse.’

“He had a good conformation and he had a very good action. I watched him every day at the ISG stable and I watched all of the horses and he was the only one to catch my eye – so I love him. I told Peter ‘He’s the only one, buy this one’.”

“This is big for me. Last year was a big pill to swallow when we didn’t win the race. I’ve learnt a lot from that race and it’s toughened me up. Here in Hong Kong, you learn from your mistakes and you move forward,” the Mauritian said.

“When the draw (barrier eight) came out, I was not too concerned because he has the gate speed. I just forgot what people were saying about the last run. I knew the horse I had underneath me and I rode him positively and got him across nicely.

“He travelled a bit the first turn. I had a nice trail through until the straight and I must say I thought ‘God, Zac’s (Purton on California Spangle) horse is going to be hard to get past.’ This horse is a little horse, but he’s got a big heart and I’m really thankful to everyone – the owner, Danny and his team.”

“Zac said everybody came too early to take him on, but if he’d had his own way I think he would have won,” Cruz said.

Purton, Moreira and John Size featured prominently on the undercard with trebles, while Ricky Yiu posted a double.

Eternal Bloom (Turn Me Loose) landed the Class 4 Ping Hai Star Handicap (1200m) for Yiu and Vincent Ho in the programme-opener, prompting Yiu to predict a bright future for the three-year-old.

“He’s a nice horse in the making, he’s still maturing, but I like him,” Yiu said before notching a double with Toycoon (Turffontein) in the Class 4 Helene Mascot Handicap (1600m) under Moreira.

“Toycoon has been consistent but unlucky. That was his 26th start but this was the right race for him. He’s a genuine horse.”

“I did not think he would win by almost five lengths,” Lor said. “Zac said he really liked the ground today, so that might be a factor.”

Firing in a treble aboard Rise Brethren (Lope De Vega) with success in the Class 3 Akeed Mofeed Handicap (2000m), Purton continued to excel – while denying winning trainer Shum a dead-heat. Shum also prepared the runner-up Copartner Elites (Charm Spirit), who was a short head away in yet another tight finish.

Formerly known as Liffey River when trained by Joseph O’Brien in Ireland, the gelding finished second in the Britannia Stakes (1m) at Royal Ascot in June 2021. Copartner Elites, then known as Beautiful Bertie, finished fifth in the same race.

Size’s Running Glory (Kermadec) confirmed his rich promise with his third victory in six starts, adding the Class 4 Designs On Rome Handicap (1600m) to his resume under Moreira before Size and Moreira combined successfully with Blaze Warrior (Sebring) in the Class 2 Rapper Dragon Handicap (1200m).

Cruz unveiled another talented galloper with the debut triumph of Buzzinga (All Too Hard) in the Class 3 Luger Handicap (1200m) under Teetan. Formerly trained in Australia by Richard and Chantelle Jolly when known as Hardtoexplain, the gelding won a maiden at Morphettville last year before export to Hong Kong.