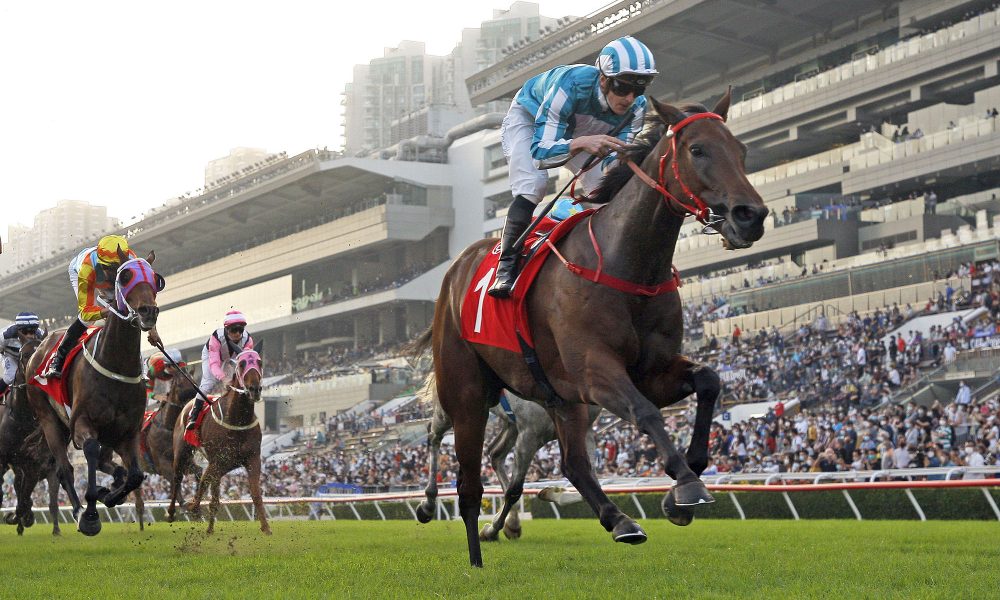 Posting his eighth win from nine starts, Romantic Warrior brushed aside fitness doubts by defying Tourbillon Diamond (Olympic Glory) and Senor Toba (Toronado) in an ominous statement of intent ahead of the Hong Kong International Races on December 11.

Setting a class record of 1m 59.23s, Romantic Warrior stamped his superiority over the final 200 metres despite not having raced for 211 days as McDonald deflected attention to Shum and fellow jockey Karis Teetan, who remains sidelined with health issues.

“First of all, I would just like to send my well wishes to Karis. He would [normally] be on this horse and it’s a pleasure to be warming the seat for him for when he gets back – and I’m sure he’ll be back very shortly,” McDonald said.

Overcoming a delayed start to the season because of a fitness setback, Romantic Warrior added further gloss to his breathtaking advance from unraced Hong Kong International Sale graduate to Hong Kong Derby (Listed, 2000m) and QEII Cup (Gr 1, 2000m) winner in his first season of racing.

“It is very hard to fight with Golden Sixty and California Spangle, so I talked to the owner about changing the plan and running at 2000 metres.

“He ran super for his first start at only 80 per cent fit. James told me that he will improve a lot after this run so I’m quite confident he will run a good race [in December].

Despite the influx of a band of internationally acclaimed riders, Zac Purton dominated the meeting with four winners to boost his seasonal tally to 44.

The five-time Hong Kong champion jockey slotted his most important win of the day in the Jockey Club Sprint (Gr 2, 1200m) aboard Lucky Sweynesse (Sweynesse) and also combined with John Size to extend a barnstorming campaign when Running Glory (Kermadec) posted his sixth win in 13 starts with a typically professional display in the BOC Life Handicap (1800m).

Barzalona made the most of a flying visit to Hong Kong, partnering Ricky Yiu’s impressive debutant Mighty Stride (Rich Enuff) to victory in the BOCHK SME in One Handicap (1200m). The Frenchman will return to Hong Kong next month to contest a star-studded International Jockeys’ Championship (IJC) and also ride at the Hong Kong International Races.

“I arrived this morning, fly back tonight, just came in for the day and I’m going to come back for the IJC and International Day in December,” Barzalona said. “It’s always a privilege to ride here and to get that winner is even better.”

Yiu was impressed with Mighty Stride and Barzalona.

“His last two trials in Conghua were good, eye-catching. He will progress as he gets more mature and I wouldn’t be surprised if he can win over a mile,” Yiu said. “I’ve always liked this jockey, he can ride light and it was good to be able to get him to ride for me.”

“Great performance, he feels a proper horse and I think we’ll hear a lot of him. That was awesome. I’m rapt,” McDonald said.

“It was great to ride a winner. Working him here on Thursday morning, he gave me an exceptional feel and he was very well placed with a good draw [1],” Bowman said. “He’s been knocking on the door and everything went his way today.

“It’s great to get on the board with a winner. I was a bit unlucky early on with one but that’s racing. I’d like to think I’ll get a bit more rhythm with a few more rides.”

Peter Ho continued his strong start to the season when Derek Leung piloted Woodfire Bro (Echoes Of Heaven) to an easy win in the BOCHK Cross-Border Services Handicap (2000m). Ho has seven wins for the campaign.