Royal Ascot gets under way with King’s Stand showdown 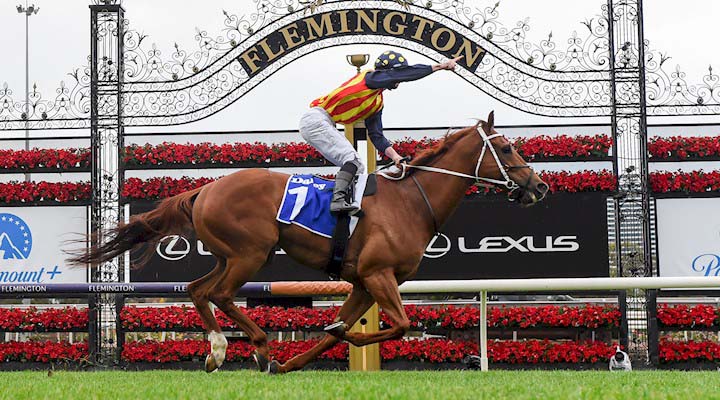 Royal Ascot’s week-long racing spectacular begins tonight with what looms as a possible showdown between Australia’s Nature Strip and the USA’s Golden Pal in an excellent edition of the Group 1 King’s Stand Stakes.

Notwithstanding the possibility that the two visitors may be too quick, it’s also possible (as is the case more often than not in horse racing) it may not be as simple as that!

American trainer Wesley Ward has described his charge Golden Pal as the “fastest of the fast”, while the Chris Waller-trained Nature Strip (whose sire Nicconi ran fourth in the 2010 edition of this race) has an imposing career record of 20 sprint wins.

On balance, with betting markets struggling to split the pair, I’d side with Nature Strip, but there are potential risk factors with each.

Golden Pal is unbeaten in six starts on home turf since a debut second, but has been beaten in his two previous forays to the UK on straight tracks. His wins have been on turning tracks in the US. On a line through horses such as Extravagant Kid, his form is not emphatically superior to the UK and European sprinters.

The straight track is certainly a plus for Nature Strip, and opting for the 1000-metre contest is wise. However, the ground is likely to be firm and some give would be preferable.

Czech runner Ponntos, local Winter Power and others including Acklam Express and Lazuli may add to an on-speed pressure which Golden Pal will be unaccustomed to and while Nature Strip has absorbed pressure, on occasions in his races, most of his straight track wins have come in sedately run affairs.

Nature Strip’s second in the Lightning Stakes after he was squeezed out at the start and gradually rolled into the race, rather than led, might be the best guide to the hope he doesn’t have to engage one-dimensionally in a speed battle.

Since 2020, this race has been won six times by overseas trained runners resuming from a break (Choisir, Takeover Target, Miss Andretti and Scenic Blast from Australia along with Little Bridge and Lady Aurelia). Another three have won fresh, including Blue Point, on return from Dubai, twice.

Of the other 13 winners in that time, five have come via the Temple Stakes at Haydock Park  and four from the Prix du Gros Chene at Chantilly, and six did defy a strong international challenge, so it’s not fait accompli that the visiting sprinters are simply superior.

Winner King’s Lynn along with Twilight Calls, Arecibo and Mondammej ran well in this year’s Temple Stakes, while only Saint Lawrence progresses from the French race, which was won by Brostaigh on soft ground.

Saint Lawrence will relish the return to firm ground, has blinkers for the first time and is not a forlorn hope. That form-line brings Logo Hunter in as another wildcard chance given that he conceded 7.5 kilograms to Brostaigh at his last run (when second). He’s a son of Brazen Beau, who Waller trained and who finished second in the 2015 Diamond (now Platinum) Jubilee Stakes.

Man Of Promise, at his best fresh, profiles similarly to Blue Point who Charlie Appleby trained to win this race in 2018 and 2019. The market leaders may dominate but, if not, there are few without some chance.

Home Affairs and Artorius (and possibly Nature Strip) will then go on to represent Australia in the Platinum Jubilee Stakes on Saturday.

The testing Ascot 1200 metres (more akin to 1400 metres here) of the Jubilee is the obvious query for Home Affairs and Nature Strip, neither of whom has raced beyond 1200 metres on Australia’s much easier, flatter tracks. The late week forecast rain could also be problematic.

I suspect it would be beyond Nature Strip, barring no early pressure in the race. However, that’s probably academic as he is only expected to run if he wins (or runs exceptionally well) in the King’s Stand on the Tuesday and if that’s the case then you’re entitled to think that such an immediate performance at the course – and the prospect of rain – would override any distance fears.

Home Affairs profiles similarly to stablemate Brazen Beau who was arguably unlucky not to win in 2015. However, Brazen Beau has a 1600-metre Group 1 placing on his resume, as does Artorius – Australia’s third hopeful this year.

I’d be wrong more often than not, I suspect, to question the judgement of Chris Waller and Coolmore and interestingly five of the past ten Jubilee winners – Hello Youmzain, Blue Point, The Tin Man, Twilight Son and Slade Power – could not boast established form beyond 1200 metres.

However, each had previously run well at the course and distance.

Relatively small fields in recent years have seen the draw of limited consequence. It is more important to be racing where the contest is at its most intense. Only seven last-start winners have won the race in the past 20 years, with a wide mix of lead-up races with the King’s Stand and The Duke Of York Stakes recurring most frequently.

Five horses have backed up from the King’s Stand to win in that time, while five winners have emerged from the York Sprint, none of whom had won. Highfield Princess and Minzaal are the two to entertain from the York race this year.

Highfield Princess, who was outstanding at York, and Wesley Ward’s Campanelle – unbeaten in two runs at Ascot – may prove hardest to beat for Home Affairs and Artorius if the track remains good. Minzaal, Happy Romance and Sacred along with Native Crown and Alcohol Free, who each drop back in trip, are among the many other chances, while soft ground would advantage Creative Force, King’s Lynn, Kinross and Rohaan.

Baaeed stifles betting on tonight’s Queen Anne Stakes after winning the Lockinge Stakes at Newbury. Six horses have completed the Lockinge – Queen Anne double in the past 20 years. Seven other Queen Anne winners had contested the Newbury race, one runner-up and six who were unplaced. Three overturned the Lockinge winner, but none with the profile of Baaeed.

The Guineas winner Coroebus similarly dominates the betting for the St James’s Palace Stakes. Sixteen winners from the year 2000 had run first or second in either the English or Irish 2,000 Guineas or both. John Gosden has bucked that trend twice in the past four years and has the interesting and progressive Mighty Ulysses engaged.

Barrier two is the one potential negative for Coroebus in a race of great quality. It’s missing the Guineas runner-up, but arguably has greater depth than the Newmarket classic.

The Wolferton Stakes also boasts great depth, but how could you not have something on Certain Lad at 33/1. He’s had only one run in 18 months, but that was a second to Solid Stone (who provides the form lead for many of these) and nine and fourteen lengths behind him were the subsequent winners Megallan and Majestic Dream.

Tonight’s Coventry Stakes is the first of six two-year-old races for the week and each holds its own fascination.

Persian Force rates highly, along with the Richard Fahey-trained Rousing Encore. They draw 12 and 11 respectively and should be well-placed stalking the Aidan O’Brien potential leaders Age Of Kings and Blackbeard, who have claims but look under-priced.

Royal Scotsman and Bradsell come off commanding wins but, drawn one and two respectively, their fate may be in the lap of the gods.  Two winners have come from gates one and three in the past eight years with three runners-up from draws one and two.

Bradsell, for Archie Watson and Hollie Doyle, was the most impressive debut winner of all and demands a ticket at odds of 8/1 at the time of writing.

Again last-start winners dominate – 16 (generally by significant margins) of the past 20. The other four had been placed, including two of Wesley Ward’s – Jealous Again and Acapulco, who were beaten on the dirt at Churchill Downs.

Campanelle won from gate one in 2020, but the high draws generally favoured, unless there were 15 or fewer runners and the bulk of the speed-runners drew low. In contrast to the 1200-metre Coventry, the winner is more likely to be leading or stalking the speed.

Ward’s Love Reigns is likely to start favourite and take some beating but Karl Burke’s duo Dramatised and Yahsat present a strong challenge, along with unbeaten English-trained, Irish-bred and French-raced filly Manhattan Jungle who has great speed.

Unlike the Coventry and the Queen Mary, it’s not all about last-start winners. Last year’s winner Chipotle had been unplaced in the National Stakes at Sandown (albeit on soft ground, after two dry track wins). Maidens had won the previous two editions and it’s an even split in the past 20 years, with ten last-start winners successful.

The draw is also relatively evenly split between inside, middle and outside. High draws (18 plus) favoured seven of the ten years before Chipotle, from barrier one, beat Dig Two from 25 last year. There is no hard-and-fast rule with the draw in these Royal Ascot straight juvenile races.

Nine winners at double-figure odds since 2006 including a 33/1 chance and a 100/1 pop. Fillies have a poor contemporary record. Autumnal, in 2000, was the most recent winning filly.

It’s wide open this year with Bolt Action and Jumbeau appealing outside the market leaders.

Last-start winners have claimed 17 of the past 20 including winners at Beverley, Hamilton (twice), Bath, Carlisle and Windsor (three). Again, significant winning margins in the lead-up are a constant. Wesley Ward’s winners No Nay Never (900m, Polytrack) and Shang Shang Shang (900m, dirt) were both maiden winners at Keeneland in April.

The Michael Bell-trained Brave Nation, with James Doyle aboard, and the Karl Burke-trained Pillow Talk are (hopefully) the value picks.

Ten straight last-start winners have been successful since the maiden Samitar (Rock Of Gibraltar) scored in 2011 and it was three straight before that. Of those winners, all bar two had won at the 1200 metres and more than half claimed the Albany at just their second start. Most had won by significant margins.

The likely market leaders Statuette, Meditate and Mawj look to have the edge here. No obvious value, unless Pillow Talk bypasses the Norfolk for this.

Ten last-start winners in the past 16 years, with five of the remaining six winners having finished between second and fifth on debut in maidens. Despite the jump to 1400-metres, only two of the past 16 winners had previously raced more than once. The Ballydoyle likely second-stringer Broadhurst makes some appeal.

The USA trainer has now had 57 Royal Ascot two-year-old runners for eight winners and six seconds and thirds; plus he’s won four races at the meeting with horses older than two years.

He’s had four winners and four placings from 13 starters (in 11 editions) in the Queen Mary. He has two wins from ten in the Norfolk and two from 16 in the Windsor Castle.

He’s yet to win the Coventry or the Chesham, but has had just four runners in each. He’s had one placegetter from ten runners in the Albany.

In other random observations for the week, I fancy (looking away from favourites) Sibilla Spain in the Duke Of Cambridge; Grand Glory in the Prince Of Wales’s Stakes and Intellogent and Legend Of Dubai in the Hunt Cup on Wednesday; Whoputfiftyinyou in the Britannia and Ottoman Fleet in the Hampton Court on Thursday, and Blackrod in the Wokingham on Saturday.