Second for Written By 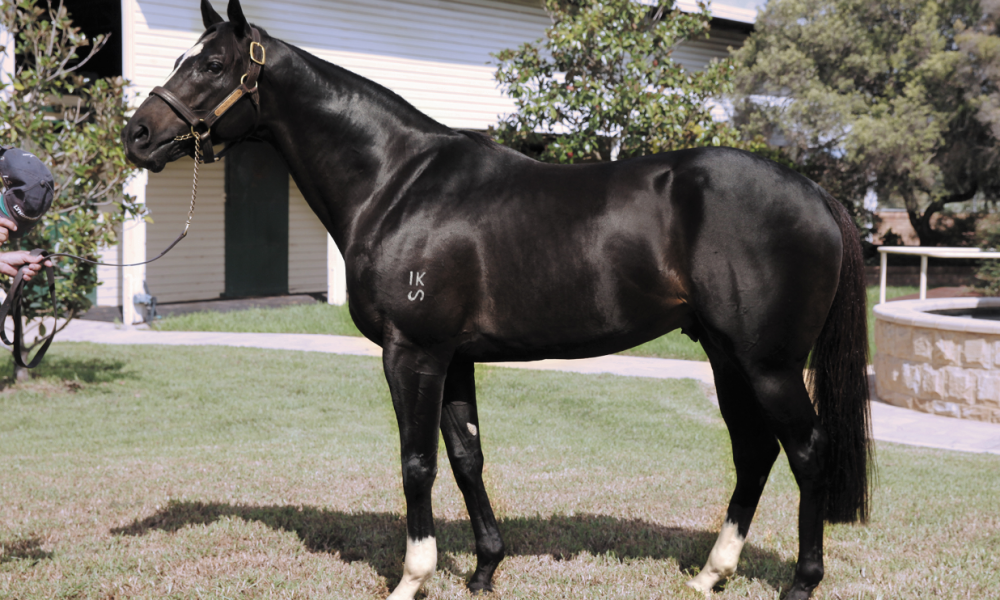 Written By – The Lee Freedman-trained Sunday Mail (Written By) built on his debut effort when scoring in an 800-metre maiden at Ipswich to become the second winner for Widden Stud’s first-season sire Written Tycoon (Iglesia). Leading from pillar-to-post under Boris Thornton, he beat Mishani Metallic (Kobayashi) by a length with a further one and a half lengths back to Mishani Ambitious (Rothesay) in third. Carrying the colours of My Racehorse, Sunday Mail was a $150,000 purchase for his trainer from the Widden Stud draft at last year’s Magic Millions Gold Coast Yearling Sale. He is the third winner from four to race out of the stakes-placed Exceed And Excel (Danehill) mare Sunday Rose. The mare, herself a half-sister to the Group 2-placed Divine Moon (God’s Own) and Group 3-placed Moonboat (Encosta De Lago), has a yearling brother to Sunday Mail. She missed to Russian Camelot (Camelot) in 2021 and was covered by Portland Sky (Deep Field) in September. Written By stands for a fee of $27,500 (inc GST).

Better Than Ready (pictured above) – Skirt The Law (2 f ex Outlaw Kate by Exceed And Excel) provided Lyndhurst Stud Farm stallion Better Than Ready (More Than Ready) with an eighth individual stakes winner from 354 starters when scoring a comfortable success in the Magic Millions 2YO Classic (RL, 1200m) at the Gold Coast. Ridden by Ryan Maloney for Tony Gollan, the filly came home well down the middle of the track to record a length and a half victory over Platinum Jubilee (Zoustar) with a further length back to Summer Loving (Exceed And Excel) in third. Bred and offered for sale by Lyndhurst Stud Farm, Skirt The Law was a $170,000 purchase for Gollan in conjunction with John Foote Bloodstock (FBAA) and Black Soil Bloodstock at last year’s Magic Millions Gold Coast Yearling Sale. She is the first foal to race from the stakes-placed Exceed And Excel mare Outlaw Kate, herself a half-sister to Group 1 winner Masked Crusader (Toronado). Better Than Ready stands for a fee of $24,200 (inc GST).

Cairo Prince – Wave Of Goodness (5 m ex Mandalay Beach by Lonhro) provided Cairo Prince (Pioneerof The Nile) with a 24th individual stakes winner when scoring in the Marie G Krantz Memorial Stakes (Listed, 8.5f) at Fair Grounds. The Armando Hernandez-trained five-year-old mare stayed on well to deny Lake Lucerne (Dubawi) by a half-length with a further length and a quarter back to My Philly Twirl (Hard Spun) in third place. Wave Of Goodness is the only winning foal out of the unraced Lonhro (Octagonal) mare Mandalay Beach. Cairo Prince, who has now had 475 individual starters, stands at Airdrie Stud in Kentucky for a fee of US$15,000 (approx. AU$21,550).

Casino Prince – Eight-year-old Cuban Royale (8 g ex Cuban Girl by Hemingway) became the 22nd individual stakes winner for veteran Vinery Stud sire Casino Prince (Flying Spur) when winning the Carrington Stakes (Listed, 1400m) at Randwick. Sent off a $14 chance, the Robert and Luke Price-trained gelding defeated Vreneli (Wandjina) by a neck with a further half-length back to $4.20 favourite Titanium Power (So You Think). Making his 60th start yesterday, Cuban Royale was winning for the third time in four outings as he took his career record to ten wins. A $34,000 buy for Robert Price from the Riversdale draft at the 2016 Inglis Classic sale, Cuban Royale has won $680,000 in his career. Casino Prince, who has had 595 runners, stood his 15th season for a fee of $5,500 (inc GST).

City Of Light – The Saeed Rashed Bin Ghadayer-trained Mimi Kakushi (3 f ex Rite Moment by Vicar) recorded a maiden stakes success, and fourth for her sire City Of Light (Quality Road), when winning the UAE 1,000 Guineas (Listed, 1600m) at Meydan. Ridden by Mickael Barzalona, the filly took up the lead with two furlongs to run and coasted to victory, beating Awasef (Cairo Prince) by four and a half lengths with a further five lengths back to Unjokable (Practical Joke) in third. Out of the Grade 2-winning Vicar (Wild Again) mare Rite Moment, Mimi Kakushi is a half-sister to stakes winners Moment Is Right (Medaglia D’Oro) and Laudation (Congrats). City Of Light, who has now had 46 individual starters, stands at Lane’s End Farm for US$60,000 (approx. AU$86,180).

Futura – Rockpool (4 m ex Miss Delish by Jallad) provided Futura (Dynasty) with an 11th individual stakes winner when scoring in the Politician Stakes (Gr 3, 1800m) at Kenilworth. Trained by Justin Snaith, the four-year-old beat stablemate Without Question (The United States) and even-money favourite At My Command (Querari). Out of the winning Jallad (Blushing Groom) mare Miss Delish, Rockpool is a full-sister to multiple Listed scorer Dindingwe. Futura, who has now had 123 individual starters, stands at Drakenstein Stud in South Africa for a fee of R20,000 (approx. AU$1,680).

Iffraaj – Goldie’s Chance (3 f ex Genealogy by Zabeel) provided Iffraaj (Zafonic) with a 90th individual stakes winner from 1795 starters when scoring in the Gore Guineas (Listed, 1335m). Ridden by Terry Moseley for Ross Beckett, the filly stayed on strongly to beat Bolshoi Star (Russian Revolution) by a long-neck with the same distance further back to Abit Sassy (Ghibellines) in third place, taking her career record to two wins from five starts. Goldie’s Chance is the only winner out of the unraced Zabeel (Sir Tristram) mare Genealogy, herself out of the Listed-winning mare Causeway Queen (Giant’s Causeway). Former shuttler Iffraaj stands at Dalham Hall Stud for £15,000 (approx. AU$26,660).

Midnight Lute – Kirstenbosch (4 m ex Llandudno by Belong To Me) provided Midnight Lute (Real Quiet) with a 41st individual stakes winner when scoring in the La Canada Stakes (Gr 3, 8.5f) at Santa Anita. Trained by John Sadler, the four-year-old came from way back in the six-runner field to run down long-time leader and favourite Ganadora (Quality Road), winning by a nose, with Smoothlikebuttah (Mr. Big) finishing a further two and three-quarter lengths behind in third. The third foal out of the stakes-placed winning Belong To Me (Danzig) mare Llandudno, Kirstenbosch is a sister to winner Storms River and a half-sister to stakes winner Constantia (Munnings). Midnight Lute, who has now had 642 individual starters, stands at Hill ‘N’ Dale Farms for a fee of US$12,500 (approx. AU$17,960).

Needs Further – Needs Sugar (2 f ex Galeocerdo by Sharkbite) provided Needs Further (Encosta De Lago) with a sixth individual stakes winner from 191 starters when posting a dominant victory in the Elwick Stakes (Listed, 1100m) at Hobart. Ridden by Troy Baker for Stuart Gandy, the filly took up the lead rounding the home turn and stayed on strongly to beat Thespian Waters (Headwater) by three lengths with a further two lengths back to Encounter Sphere (Stratosphere) in third place. A homebred for part-owners, the Barwick and Millar families, Needs Sugar is the first foal out of the multiple winning Sharkbite (Redoute’s Choice) mare Galeocerdo. Needs Further stands at Armidale Stud for a fee of $6,600 (inc GST).

Satono Aladdin – Rich Hill Stud shuttler Satono Aladdin (Deep Impact) sired his third individual stakes winner from 145 starters when Tokyo Tycoon (2 g ex All About The Coin by Starcraft) produced a stunning last-to-first success in the Karaka Million 2YO (Listed, 1200m). Ridden by Craig Zackey for Te Akau head trainer Mark Walker, the gelding came from well in the rear of the field to produce a memorable performance, staying on powerfully to beat Ethereal Star (Snitzel) by three-quarters of a length with a further length back to Trobriand (Kermadec) in third. Tokyo Tycoon was purchased for $125,000 as a yearling by Te Akau principal David Ellis in March last year at the Karaka Book 1 Sale out of the Rich Hill Stud draft. Out of All About The Coin, a three-time winning daughter of Starcraft (Soviet Star), he is a half-brother to dual winner Syd’s Coin (Denman). Satono Aladdin stands for a fee of $12,500 (plus GST).

Snitzel – Green Aeon (7 g ex Berengaria by Commands) provided Snitzel (Redoute’s Choice) with a 131st individual stakes winner from 1409 starters when winning the Concorde Handicap (Gr 3, 1200m) at Pukekohe. Trained by Todd Mitchell, the seven-year-old hit the front with 200 metres to go, staying on strongly to beat El Vencedor (Shocking) by one and three-quarter lengths with a further head back to Fashion Shoot (Savabeel) in third. The victory takes the gelding’s record to two wins from three starts since moving from Hong Kong. Out of the unraced Commands (Danehill) mare Berengaria, he is a half-brother to Myer Classic (Gr 1, 1600m) winner Politeness (Street Sense). Snitzel stands at Arrowfield Stud for a fee of $220,000 (inc GST).

Toronado – Global Heat (7 g ex Raskutani by Dansili) provided Swettenham Stud shuttler Toronado (High Chaparral) with a 29th individual stakes winner when producing a career-best performance in the Al Khail Trophy (Listed, 2800m) at Meydan. Ridden by Pat Cosgrave for Saeed bin Suroor, the seven-year-old gelding stayed on well to beat Away He Goes (Farhh) by a length with a further neck back to Ardakan (Reliable Man) in third. A 325,000gns purchase for Godolphin as a yearling, he is the sixth foal out of the unraced Dansili (Danehill) mare Raskutani, making him a half-brother to five winners including Group 3 scorer Agent Murphy (Cape Cross) and Listed winner Media Storm (Night Of Thunder). Toronado, who has now had 603 individual starters, stands at Haras de Bouquetot for €8,000 (approx. AU$12,490).