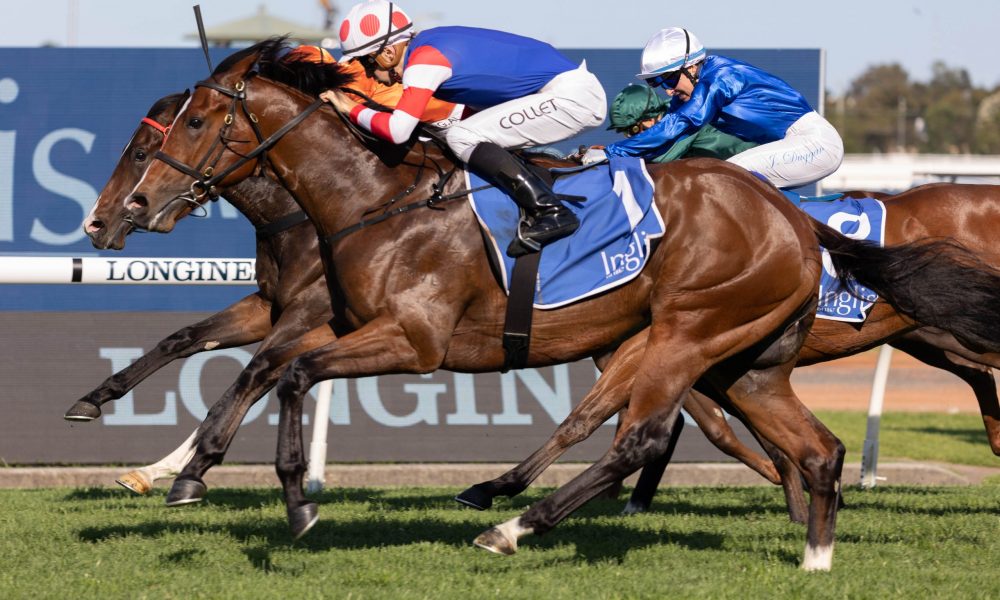 Ever had that dream where you’re getting around in public feeling pretty damn good and then you look down and suddenly realise you’re stark naked?

That may be something like how Dale Miller felt at the Inglis Select Yearling Sale in Scone in 2015. The Wauchope businessman had gone seeking to take a more forward position in his venture as a hobby breeder. He soon felt like he was three-wide with no cover.

Miller, a now 64-year-old who trades in home hardware, rural produce and property, was just starting out in breeding, though he had raced a few.

He was about to celebrate the best one, an honest gelding called Backhouse Billy, who he’d bought at the Gold Coast Magic Millions for $41,000. He’d win five races and $168,000 out of Jenny Graham’s Port Macquarie stable. He was by Hinchinbrook, a sprinter Miller had admired.

Miller will admit to “not knowing a mile” about pedigrees, but has an eye for a horse and fancies stallions he liked as racehorses. That’s what drew his eye to a filly also by Hinchinbrook, out of an Encosta De Lago mare, at that Scone sale. He got what he wanted, and what an unnerving experience that was.

Bidding started at $6,000. Miller marked his ground with a firm opening gambit, sticking his hand up for $6,500. He waited for the counter-bid, preparing to bat it away with equal vehemence.

More silence … broken only by the bang of a gavel.

“I think I was the only bidder,” he says. “I never saw anyone else bid, put it that way. I put one bid in, they said six-and-a-half thousand, and knocked her straight down to me. I don’t think they even had a reserve on her.”

A little like the one left out of the joke, Miller asked himself the obvious question: “What’s wrong with her?”

There was a slightly offset knee, but not so as you wouldn’t buy her. He rewound to that morning’s inspection.

“I thought back and I’d heard comments from people nearby,” he says. “It was like, ‘This one looks good’, and then ‘Nah, it’s mother only won over 2100 metres’.”

There was the rub. The filly’s dam was tarred with the staying brush. Jahre was a winner of one race, at Wyong, and it was over a distance most unfashionable for this auction.

“Nearly all the horses at that sale went to country trainers,” Miller says, “and out here in the country we don’t have a lot of distance races. You’ve really got to chase them.”

Miller delivered his filly with the staying blood to Graham. A few months later, Miss Amajardan debuted in New South Wales’ first two-year-old race of the season, the Romantic Dream Plate, the prestigious 1000-metre scamper transferred that year from Tamworth to Armidale. She bolted in, by three and a half lengths.

Graham took her to town and a second BOBS bonus race, the 1000-metre Victory Vein Plate at Randwick. Backed from $6.50 to $4.60 she won by a length. The “Port Macquarie flyer”, as she was then dubbed by the Sunday Telegraph, upset the mighty Godolphin and their future Group 2 winner Morton’s Fork and set a time of 56.93 seconds – breaking the race record of subsequent Group 1 winner Sweet Idea.

“So she turned out to be a sprinter,” Miller laughs, “and a pretty good one! I was over the moon.”

Of course racing teaches us not to count chickens. When Miss Amajardan went for a spell at Miller’s farm she was one of the early favourites for the Golden Slipper. That soon changed.

“She got spooked and ran into the back of the shelter and smashed her head,” he recalls. “It didn’t hurt her airways but it damaged her sinuses badly. I sent her to Sydney for surgery to get these broken bone chips out. They said it was like a smashed egg shell.”

That began a year of frustration for Miller and Graham due to the filly’s now-compromised sinuses, which would require more surgeries as more bone chips emerged.

Miss Amajardan missed the early autumn of 2016 but resumed off a Taree barrier trial win back at her place of origin in the $100,000 Inglis Challenge on Scone Cup Day. She was odds-on favourite but managed only third.

Graham nursed her up for a third campaign. She resumed with a second at Canterbury to future stakes-winner Spending To Win, but was suffering again post-race, and retirement soon followed.

The four-year-old Miss Amajardan was booked for a first mating with Widden’s star performer Sebring, but when he was benched with colic Miller chose his best-performed son, Dissident. The resulting filly, Crystal’s Legacy, has had three starts for Miller with Sydney trainer Gary Portelli.

“She shows ability but being by Dissident she hasn’t got the maturity,” Miller says. “Plus she’s probably a bit heavy in the front.”

Second-up, Miss Amajardan had that delayed date with Sebring. This mating, with that slightly more slender stallion, produced Sejardan.

Bought as a $160,000 yearling by Portelli, who liked what he saw in Crystal’s Legacy, and with Miller retaining 30 per cent, Sejardan made it two from two by winning Saturday’s $1 million Golden Gift (1100m) at Rosehill.

“Breeding’s just an interest and a hobby for me, albeit an expensive one,” says Miller, who teams with Verna Metcalfe’s Middlebrook Valley Lodge in his breeding interests. “I don’t do it to make money or anything. This one’s turned out alright though.”

It’s perhaps a good thing Miller liked Hinchinbrook, for you have to dig deep into Miss Amajardan’s pedigree to find gold. It is there, however, in her third dam, Procrastinate (Jade Hunter, USA).

Procrastinate won a Group 3 at Caulfield but proved more outstanding at stud, with five stakes-winners from 16 named foals. In Australia, these were the lower-level black-type victors Foreplay (Danehill) and Personify (Galileo), plus Time Thief and A Time For Julia, both by Redoute’s Choice. But Procrastinate’s first foal, Laisserfaire (Danehill), went to South Africa where he won five Group 1s, two Group 2s and three Group 3s.

Time Thief has sired dual Group 1 winner In Her Time and four other stakes-winners, while Personify’s most recent of seven named foals is last year’s VRC Oaks winner, Personal.

Still, the first thing you notice about Sejardan’s pedigree is a triple dose of Danehill, at 4x4x5. It’s through three sons as well, but since they all carry through females the more common dangers are avoided. Danehill’s in the top half through Sebring’s dam Purespeed (Flying Spur), and through Miss Amajardan via Hinchinbrook (Fastnet Rock), and her second dam Whatever (Danzero).

Widden’s Antony Thompson notes the ripe chance for such duplication with Sebring, since Danehill’s presence is softened by coming through his female line. The great son of Danzig, in fact, ranks fourth among Sebring’s nicks, with 14 winners from 24 runners, including three stakes winners.

The angst-ridden note, of course, is that Sejardan is flying the flag for Sebring’s final crop, after the stallion’s fatal heart attack in 2019, aged only 13.

Just to leave with a bang, the 2008 Golden Slipper winner is having a bumper season. He sits sixth on the Australian general sires list, with Superstorm his top earner having become his seventh individual Group 1 winner in last month’s Cantala Mile at Flemington.

Sejardan has Sebring well clear atop the (admittedly nascent) two-year-old sires’ list, while the exciting Fangirl and VRC Oaks third-placegetter Biscayne Bay have helped him to seventh among three-year-old sires.

Sebring has been a consistent force, featuring in the general sires’ top ten for seven straight seasons after a peak of third when Dissident and Criterion were in their pomp in 2014-15.

“We’re proud of his achievements and it’s good to see him still having such success,” Thompson says.

“He’s been incredibly versatile, doing it with colts and fillies, with horses that start well and train on. There’s no better example than Criterion, who won three times as a two-year-old, ran sixth in a Golden Slipper, and was placed in a Melbourne Cup.

“Let’s hope Supido can live up to his sire’s success,” he says of Widden’s speedy son of Sebring’s, whose first progeny have just hit the track.

Miss Amajardan, meanwhile, has a Capitalist colt at foot and a colt by Trapeze Artist heading to Inglis Easter, where he’ll no doubt heap more hefty profits on top of Miller’s modest – and lonely – outlay from that fateful day at Scone.