September Run storms back to form in William Reid triumph 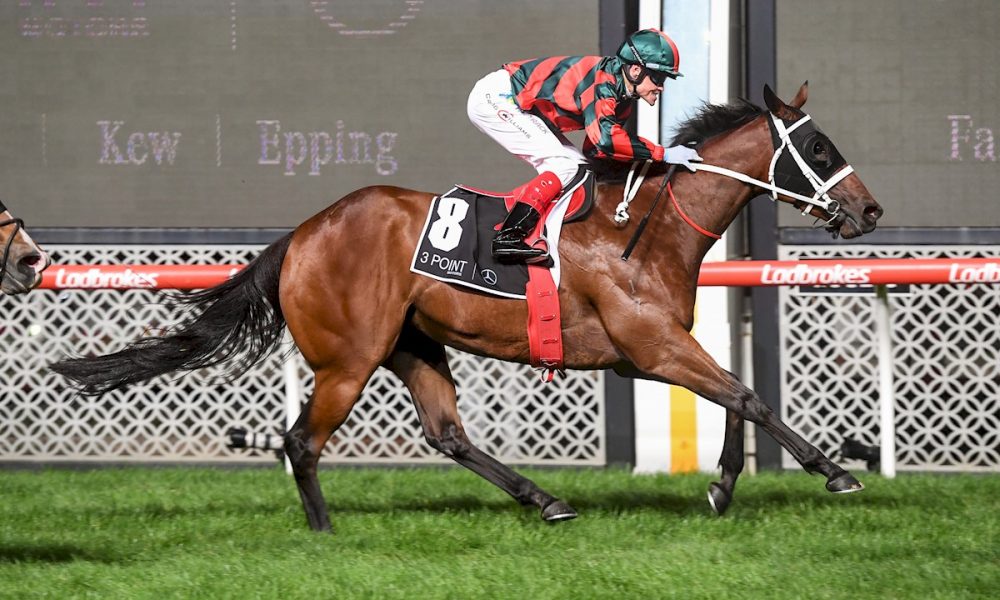 High-class mare September Run (Exceed And Excel) returned to something like her brilliant best, adding a second Group 1 to her record when she produced a brave performance to win the William Reid Stakes (Gr 1, 1200m) at Moonee Valley last night.

The daughter of Exceed And Excel (Danehill) had not tasted victory since her win in the 2020 edition of the Coolmore Stud Stakes (Gr 1, 1200m) and her trainer Chris Waller admitted the mare had regressed since her sparkling three-year-old season, which also included a brace of wins at Listed level, to accompany her two-year-old Listed triumph.

However, September Run signalled she might be returning to top-form when finishing an eye-catching third behind Roch ‘N’ Horse (Per Incanto) in the Newmarket Handicap (Gr 1, 1200m) at Flemington on March 12.

Settling midfield under jockey Craig Williams, the mare relished a fast tempo up front, set by Jonker (Spirit Of Boom) and the previously unbeaten favourite Marabi (I Am Invincible). With 300 metres left to travel, Williams began to make his move on September Run, and eventually let down impressively, bursting through the pack to post a length victory over Halvorsen (Magnus) with General Beau (Brazen Beau) close up behind in third.

The Ciaron Maher and David Eustace-trained Marabi, who eventually finished fifth, will now head for a well-earned spell, while September Run will likely be sent to Morphettville where a tilt at the Robert Sangster Stakes (Gr 1, 1200m) could be on the cards.

“She was probably the best three-year-old of her season and it’s gone backwards since then, but it was a glimpse of September Run last start. She’s been bouncing out of her skin,” said Waller.

“Tonight was 1200 metres and she really got to show her class. There’s a mares race in Adelaide (Sangster) for her.

“It’s the first time I’ve been at Moonee Valley in three years, Jo (Taylor) has kept the ball rolling for us, I’m very fortunate to have good staff around Australia.”

Meanwhile, Williams, who has partnered September Run in the majority of her runs, including the Coolmore win, said she had matured.

“Her achilles heel has been getting around tight turning tracks. I rode her in a gallop before the Newmarket and saw how mature she is,” the winning jockey said.

“Once we were in a straight line I thought she was a superior mare because when she was a three-year-old she was so tough and tenacious down the straight.

“She won well and it’s great to see her back and to win another Group 1 which isn’t easy.”

September Run (4 m Exceed And Excel – Pittsburgh Flyer by Street Cry) was purchased by her owners Hermitage Thoroughbreds for $380,000 at the 2019 Inglis Premier Yearling Sale from Phil Campbell’s Blue Gum Farm draft and this latest victory takes her prize-money earnings to $2,234,900.

“September Run is such a consistent mare, she ran so well in the G1 Newmarket last start to finish third and I thought she was in with a very good chance tonight, even though Moonee Valley has been a tricky track for her in the past,” said a delighted Campbell.

“I remember her well as a yearling, she was very popular at Inglis Premier and was a neat, tidy and correct filly, a short-stepping sprinting type and that’s how she races too.”

September Run is one of two winners out of Group 3 scorer Pittsburgh Flyer (Street Cry) who herself is a daughter of South African Grade 2 winner Warning Zone (Elliodor), who was also placed at Grade 1 level.

Pittsburgh Flyer was purchased by Go Bloodstock and Paul Moroney Bloodstock for $500,000 at the Magic Millions National Broodmare Sale, carrying a filly by American Pharoah (Pioneerof The Nile). That filly was snapped up by Hirsch Racing for $100,000 at the 2020 Inglis Easter Yearling Sale and has won twice.

In 2020, Pittsburgh Flyer foaled a filly by Coolmore Stud-based stallion Merchant Navy (Fastnet Rock) who was purchased by Ciaron Maher and Best Bloodstock for $700,000 at the Magic Millions Gold Coast Yearling Sale earlier this year. Last season, the mare produced a brother to September Run and she has most recently slipped to Exceed And Excel.

September Run is one of 16 Group 1 winners and 194 stakes scorers for Darley’s stalwart stallion Exceed And Excel, who stood at their Kelvinside base for a fee of $132,000 (inc GST) in 2021.

Crosswinds (Written Tycoon) made headlines as a yearling when he was purchased by James Harron for a sale-topping $1.1 million at the Inglis Premier sale last year, and yesterday the colt justified that hefty price-tag when he preserved his unbeaten record with a victory in the Moonee Valley Pearl Stakes (Listed, 1200m).

Trained by Anthony and Sam Freedman, the two-year-old came into the race having made a winning debut over 1100 metres at Ballarat on March 8 and he showed huge improvement from that first outing by beating Nanagui (Sebring) by a length. All Sassed Up (Shalaa) was a further nose away in third.

“He had a good experience on debut; he was quite green and new. He still doesn’t know what he’s doing. but he’s got a good motor there.

“We weren’t sure where we were going to be placed once the gates opened. We were inclined to let him find his feet rather than work up on the speed.

“No doubt he’s going to improve at three; he’s still very raw. We’ll see how he comes through it, and we’ll assess him next week.”

Winning Jockey Mark Zahra, who enjoyed a treble on the night, said he expected the colt to continue improving.

“He’s still quite green. There looked to be a bit of speed – I just wanted to ride him quiet and have the last crack,” Zahra said.

“They slowed up mid-race, and I just wanted to be on top of him at the bend, but I got there a bit soon, he was looking all around, but he ended up winning quite easily in the end.”

Bred by Dorrington Farm’s Rob Crabtree, the colt was purchased from Phil Campbell’s Blue Gum Farm draft at the Inglis Premier Yearling Sale and in winning the Listed contest the juvenile kicked off an impressive stakes double for Blue Gum graduates, with September Run (Exceed And Excel) taking out the penultimate race on the card, the William Reid Stakes (Gr 1, 1200m).

“It has been a wonderful night,” Campbell said.

“To quinella the two-year-old feature and see September Run back to her best was just fantastic.

“He (Crosswinds) is such a professional colt,” Campbell said.

“I saw his two trials and his winning debut and he’s just improved all the way through, tonight I watched him in the parade ring, the saddling paddock and going onto the track and he never turned a hair.

“He beat Nanagui who we sold to Rosemont Stud in the same draft for $450,000, the equal second-highest priced filly of the sale.

“I’ve been in touch with James (Harron) and he’s absolutely rapt that his confidence in Crosswinds has paid off and hopefully for James and his partners this colt is a Group 1 winner-in-waiting.

“It’s also satisfying for breeder Dorrington Farm, Crosswinds was Rob’s (Crabtree) first million dollar yearling too and just adds to the success we’ve already shared with Semillion – a $300,000 colt from the 2021 draft who won the Inglis Banner.

“That’s the most pleasing thing for me, it’s all well and good to sell yearlings for big money in the sale ring, but ultimately it’s about racetrack results and we’ve had such a good run with high-priced yearlings.

“You’ve got to celebrate nights like this that’s for sure!”

Crosswinds (2 c ex Gybe by Fastnet Rock) is one of three winners out of dual Listed-winning Fastnet Rock (Danehill) mare Gybe and she is herself a half-sister to dual New Zealand Group 1 winner Anabandana (Anabaa), the dam of Group 2 winner Packing Rockstar (Fastnet Rock).

Last year, Gybe produced a sister to Crosswinds and was once again covered by Written Tycoon (Iglesia) in October.

The Gai Waterhouse and Adrian Bott-trained Shout The Bar (5 m Not A Single Doubt – Drinks All Round by O’Reilly) further enhanced her credentials ahead of her selling at the Inglis Chairman’s Sale in May when she made all to win the Sunline Stakes (Gr 2, 1600m) at Moonee Valley last night.

The five-year-old mare had failed to trouble the judge since her Empire Rose Stakes (Gr 1, 1600m) triumph in 2020, but she never looked in any danger yesterday, eventually sauntering to a comfortable four–length win over Barb Raider (Rebel Raider).

Favourite Flying Mascot (Tavistock) finished another half a length away in third, with her trainer Tom Dabering reporting the mare was lame after the race.

Waterhouse and Bott’s representative Claudia Miller said Shout The Bar was able to show her class and talent on the sounder surface.

“We’ve been plagued with wet tracks in Sydney so to get a Good 4 tonight and over the right distance stepping up to the mile, she was just terrific.”

The stable will now likely aim the mare the Queen Of The Turf (Gr 1, 1600m) on the second day of The Championships at Randwick.

Purchased by her trainers from the Newhaven Stud draft for $200,000 at the Magic Millions Gold Coast Yearling Sale in 2018, The daughter of Not A Single Doubt (Redoute’s Choice) is one of two winners out of three-time winning O’Reilly (Last Tycoon) mare Drinks All Round, while further back she hails from the same family as dual Group 1 winner Rangirangdoo (Pentire).

Meanwhile in the last race of the evening, the Mick Price and Michael Price Jnr-trained Daisies (3 f Sebring – Tigress Lily by Snitzel) added a second Group 3 to her CV when she landed the Alexandra Stakes (Gr 3, 1600m) and the daughter of Sebring (More Than Ready) could now be set for a crack at the Australasian Oaks (Gr 1, 2000m) at Morphettville on May 7.

The three-year-old filly landed the Ethereal Stakes (Gr 3, 2000m) at Caulfield in October and yesterday she returned to winning ways with a half-a-length win over Bon’s A Pearla (Bon Hoffa). Douceur (No Nay Never) was a further neck away in third.

Purchased by Sheamus Mills for $250,000 from the Widden Stud draft at the 2020 Magic Millions Gold Coast Yearling Sale, Daisies is out of the four time-winning Snitzel (Redoute’s Choice) mare Tigress Lily, making her a sister to the Listed-placed Motown Lil.