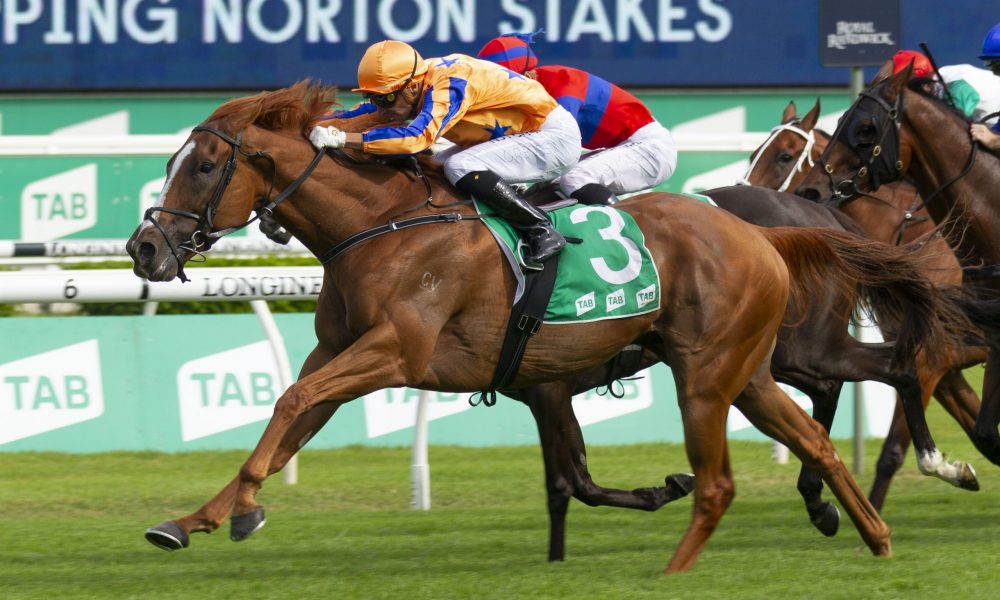 After drawing badly in stall 12 and conceding the leaders some eight lengths nearing the home turn, talented New Zealander Te Akau Shark (Rip Van Winkle) needed to produce an effort out of the box to win Saturday’s Chipping Norton Stakes (Gr 1, 1600m) at Randwick. And he did.

The five-year-old took a moment to respond to Opie Bosson’s riding on turning into the straight before storming home, displaying an exceptional turn of foot to eventually claim a soft, half-length win at the post in a time of 1:33.87.

The victory took Te Akau Shark’s imposing record to seven wins and four placings from 12 starts, while this was the powerful chestnut’s second Group 1 success having won the BCD Group Sprint (Gr 1, 1400m) at Te Rapa when resuming on February 8.

The runner-up, New Zealand-bred mare Verry Elleegant (Zed), was brave in defeat, staging one of her best performances at her second run back.

The dual Group 1 winner has raced far more tractibly this preparation and after settling in fourth spot, Verry Elleegant hit the front at the 100 metres. She then fought gamely for second, clocking a quick 33.62 for her last 600 metres.

Japanese-bred import Fierce Impact (Deep Impact) came from seventh at the home turn and the dual Group 1 winner then battled on well for a good third, a length and a quarter further back.

Godolphin’s three-time Group 1 winner Avilius (Pivotal) took the eye in running on for fourth, beaten two lengths, after coming from back in 11th place when having his second start this preparation.

The Godolphin-raced gelding now heads to Flemington tomorrow for the Australian Cup (Gr 1, 2000m) looking primed for another Group 1 victory.

Earlier in the day at Randwick, the Chris Waller-trained filly Hungry Heart (Frankel) stamped her potential when staging a smart effort in taking out the Sweet Embrace Stakes (Gr 2, 1200m) at only her second start.

After settling back in the field from a difficult barrier (7), Hungry Heart was suited by a fast pace and she showed her talent in running on strongly to defeat the favourite Stellar Pauline (Not A Single Doubt) by three-quarters of a length in a time of 1:09.64.

Stellar Pauline set a quick tempo after working to find the lead and her effort was certainly sound in fighting well for second after clocking a fast 800-metre mid-race section of 44.42 (from the 1000m to the 200m).

In the Skyline Stakes (Gr 2, 1200m), the John Thompson-trained colt Mamaragan (Wandjina) overcame racing on a fast mid-race pace to score on debut.

The attractive colt raced outside the leader Postcode (Vancouver) and despite clocking 43.92 for his 800 metres (from the 1000m to the 200m), Mamaragan fought back gamely to win by a length and a quarter in a time of 1:09.52, which was 0.12 seconds quicker than the Sweet Embrace Stakes.

The feature race at Flemington on Saturday was the Australian Guineas (Gr 1, 1600m) where Alligator Blood (All Too Hard) took his impressive record to 10 wins from 11 starts in recording his first Group 1 victory.

The David Vandyke-trained gelding went on to score comfortably by a length and a quarter from the Western Australian Superstorm (Sebring) with Soul Patch (Shamus Award) another nose away in third in a time of 1:34.92.

In running on from back in seventh place, Superstorm clocked 33.19 for his last 600 metres, which was the quickest of the race.

Another Western Australian did well at Flemington, with the highly-consistent grey mare Fabergino (Maschino) scoring stylishly at her eastern-states debut in taking out the Bob Hoysted Handicap (Listed, 1000m).

Fabergino travelled particularly well, holding a narrow lead in the centre of the track before dashing clear at the 300 metres. She then went onto score with something in hand by a length and a quarter in the quick time of 56.55.

It was Fabergino’s eighth win in 11 starts and the Tiarrna Robertson-trained mare has since gone home to Western Australia with connections now holding plans to return to Melbourne to tackle stronger Group sprints.

The runner-up, the Danny O’Brien-trained mare Embrace Me (Shamexpress), also did very well on the watch in making ground from back in seventh place to take second, albeit without troubling the winner.