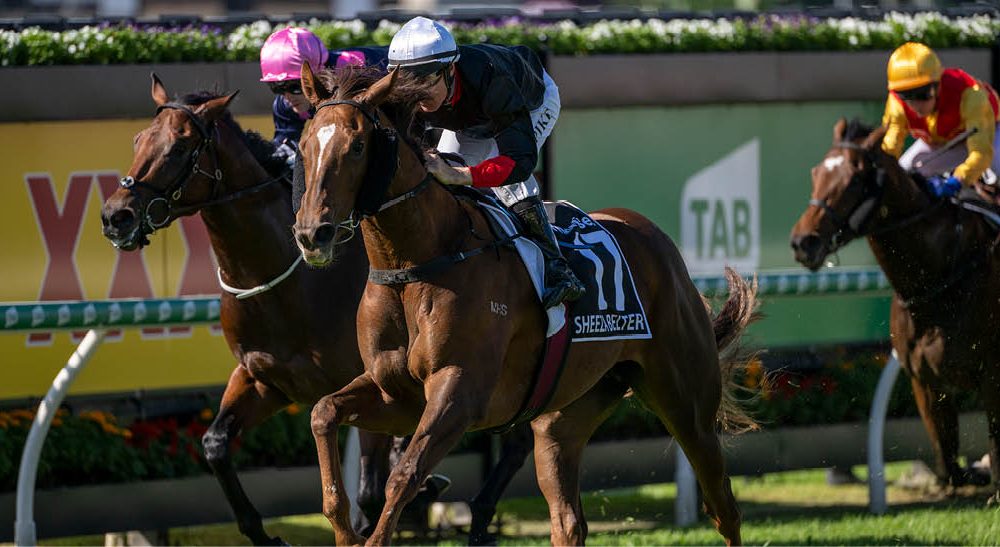 They do things big in Western Australia.

A few years ago, south coast boutique breeder Craig Thompson bought a boat and named it after his wife – Rosemary. That sounds very lovely, but it’s the kind of boat – not that he’d want to try this – that wouldn’t fit into the MCG.

Thompson, the 61-year-old owner of Mt Hallowell Stud, near the town of Denmark, is also the Thompson from the vast Thompson Shipping Group.

He’s a proud West Australian. His ancestors were on a ship far smaller than the bulk carrier Rosemary which was the first to drop Europeans in WA, in 1829. He hopes to see his beloved Fremantle Dockers prove a perfect fit for the MCG on AFL grand final day this year. And he loves breeding horses for the WA market.

He parlayed a love of racing into ownership, in some style, in 2005, buying into the future five-time Group 1 winner Theseo (Danewin). Around the same time he bought a vineyard, took a bulldozer to it, and crafted his horse farm.

In 2013, he sent a mare he’d bred called Saxabelle (Saxon) to Darley’s Teofilo (Galileo) in the east. He got a colt, and named him Captain Fremantle. That was big, too. In fact, way too big. He kept growing till he was nearly 17-and-a-half hands, and was deemed not right for racing.

“He was just a monster,” Thompson tells It’s In The Blood. “Teofilo’s 16.2 hands, the mare’s 16.1, and this was her first foal, so go figure. The colt was just a beautiful-looking horse, but he was just too big, broke down a couple of times, and so we didn’t race him.”

But five years later Thompson sent Saxabelle, who’d raced with city-winning distinction in his mostly gold colours, to a stallion he’d owned in a too-brief racing career, Gold Standard (Sebring). And there was a good dash of that colour in the result, a Goldilocks-style filly who was just right, and who’s become the best of the 100 or so horses he’s bred: Sheeza Belter.

Thompson also calls her “the one that got away”, having sold the now two-year-old for “only fifty grand!” – at the Perth Magic Millions yearling sale.

Kicking off with Luke Fernie, on the first day of this year she won on debut at Ascot – just like her mum – and after taking Pinjara’s lucrative Magic Millions WA 2YO Classic (RL, 1200m) at her third run, was transferred to Peter and Paul Snowden in Sydney. Last Saturday, in her third run for that stable, she became her sire and dam’s first stakes-winner, at Group 2 level to boot, storming home powerfully to head an 18-runner field in Queensland’s Sires’ Produce Stakes (1400m) at Eagle Farm.

That sealed an impeccable piece of timing for the man who makes this a tale of two Thompsons – Widden Stud’s Antony – who only one day earlier completed a deal for Gold Standard to switch to Widden Victoria, after formerly standing at defunct Spendthrift Australia.

That said, things could also have gone better, timing-wise. Widden could, for example, have held off just a day in announcing Gold Standard’s 2022 service fee of $8,800, after the Sires’ Produce result had given him a stakes winner from just five runners (an Extreme Choice-esque 20 per cent ratio, if you’ll pardon the sample size).

Nevertheless, Widden will likely be moved to adjust things if Sheeza Belter can now provide her sire with a maiden elite-level winner in the JJ Atkins (Gr 1, 1600m) on June 11, for which she’s suddenly favourite at around $4. It would be a bump that would reward those who jumped in early, and Thompson reports bookings have been strong since his filly’s win on Saturday.

“It might have been a good move to wait a couple of days before posting the fee,” Antony Thompson says with a laugh, “but at this time of year you’ve got to get things moving.

“But if she wins the JJ Atkins, you never know we might have to adjust his price, if he’s not already full. The demand would definitely be there.”

Widden has now pounced on two stallions with stunning stakes-winners-to-runners ratios in recent weeks. Golden Slipper (Gr 1, 1200m) -winner Fireburn’s sire Rebel Dane (California Dane) is set to serve far bigger books at the stud’s Hunter Valley headquarters from this season than the Victorian coverings which have brought just 17 runners from his first two racing crops – including two black-type victors. Similarly Overshare (I Am Invincible), another Widden Victoria pick-up from Spendthrift, who’ll stand for $11,000, has two winners from four runners, headed by the stakes-placed Lady Laguna.

But there’s an added attraction for Widden in Gold Standard, in that he’s a son of the stud’s cherished sire Sebring (More Than Ready), the Slipper winner who died three years ago at just 13.

“When I inspected Gold Standard, I found he’s as close to a clone of Sebring as you’d ever see. Physically he’s so much in the mould of his sire, so there was a natural attraction there,” the Widden Thompson says.

“We’ve got a very soft spot for Sebring, but we’ve also built a good understanding of how to mate them and what worked for Sebring, and we really look forward to doing the same with Gold Standard.

“His books haven’t been that big, but that’ll change now. The numbers have been coming at a rate of knots this week. I’d say by the time they let them go in the JJ his book will be nearly full.”

Gold Standard has stood four seasons but is still only about to turn eight, thanks to an injury-enforced retirement at three after six starts for two wins. These were highlighted by the Stan Fox Stakes (Gr 2, 1500m) of 2017, when he left his new Widden-mate Trapeze Artist (Snitzel) in his wake. Though boasting robust fertility rates – 93.5 per cent in his first season – he covered just 195 mares in those four years, dwindling to just 26 in his final spring with Spendthrift.

Gold Standard’s relatively modest popularity at stud echoed the quiet search for him to find a home after his racing days.

“He could’ve been anything as a four-year-old,” Craig Thompson says of the chestnut who was fourth in Trapeze Artist’s Golden Rose (Gr 1, 1400m), the start before an unplaced swansong in the Caulfield Guineas (Gr 1, 1600m).

“He hasn’t covered all that many mares but I’m very happy he’s gone to Widden.”

After Sheeza Belter arrived, Saxabelle was covered by More Than Ready (Southern Halo), to produce “an amazing looking colt” who’s now soon to turn two. She’s now in foal to Brave Smash (Tosen Phantom) – one of a few stallions in whom Craig Thompson owns shares – but there’s no doubt where she’ll go this spring.

It’s the More Than Ready line – carried on through Sebring and Gold Standard – which the breeder feels works well with Saxabelle, who’s by a son of Danehill (Danzig) in Saxon and from a Sunday Silence (Halo) damsire line. Danehill is one of Sebring’s top three nicks, but is the runaway leader for More Than Ready, with 113 winners from 167 runners, including 11 stakes winners.

Sheeza Belter’s pedigree is, however, a pretty plain affair, with no stakes winners to be found among or descending from her first five dams, back to the 1960s British import Cupid Line (Dan Cupid). It does have a 5Sx3D double-Danehill, carried in by mares through their sires, in the aforementioned Saxon and Sebring’s damsire Flying Spur.

Craig Thompson’s lifetime breeding right to Gold Standard helped motivate the mating, which “lined up beautifully on nicks and physicals”, but he also liked some intricacies way back in the pedigree. Natalma’s (Native Dancer) there seven times in the first nine generations, her fellow blue hen La Troienne (Teddy) once in each half, through two different daughters. But elements you can’t see on paper told him Saxabelle would make a broodmare.

“She never stopped trying,” he says of the Trevor Andrews-trained mare. “Just that winning feeling – head down, ears back, huge nostrils. We were actually going to set her for the Perth Cup. She’d won over 1100 metres and 1650 metres and was showing she was going to run a distance.”

When she was four, however, disaster struck. En route to Mt Hallowell for a spell, Saxabelle somehow slipped and rolled in the float.

“She had broken ribs, a huge gash,” Thompson recalls. “It was pretty nasty.”

Saxabelle recovered, showing the same grit she’d displayed in her wins, and was now about to pass on in her hastened breeding career. Having first been an equine bulk-carrier of Captain Fremantle, her second foal was Grand Design (Master Of Design), a four-time city-winner mare so far. Third out Kazkazi (Alfred Nobel) has won five at Albany, King David (Longma) is a yet-to-race four-year-old, and then came the family star.

“Sheeza Belter is the one that got away, but I had so many yearlings that year, and you can’t keep them all,” says Thompson, who owns around 14 mares. “And I hope she keeps winning because I’ve got Grand Design and Saxabelle’s half-sister Retosona (Wanted).

“And of course I’ve still got Saxabelle. She’ll be going back to Gold Standard next, that’s for sure.”