Shulz prepares to bid fond farewell to life at Caulfield 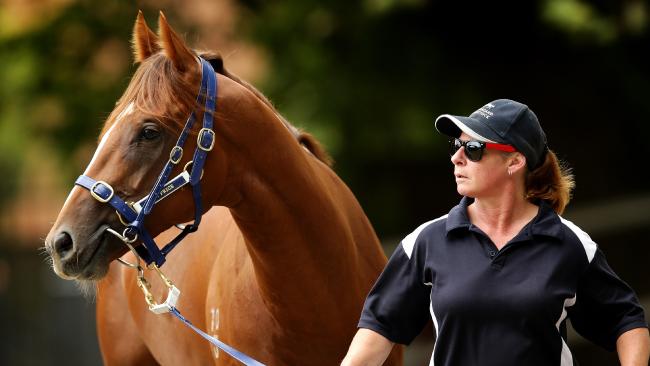 A black and white scrapbook cut out of a tiny young girl sitting very happily on a big thoroughbred says a lot about what was to transpire in the life story of Kylie Schulz.

She started riding trackwork at the tender age of ten and it’s become her life ever since. There’s nowhere she would rather be than on the back of a racehorse each morning.

Turning 52 next week, Shulz has spent the past 11 years playing a pivotal role with the Mick Price and Michael Kent Jnr team in Melbourne.

But after decades spent guiding the careers of some of the best horses to ever come out of the stable including Blue Diamond (Gr 1, 1200m) winners Samaready (More than Ready) and Extreme Choice (Not A Single Doubt) she’s preparing to hang up her well-worn boots. 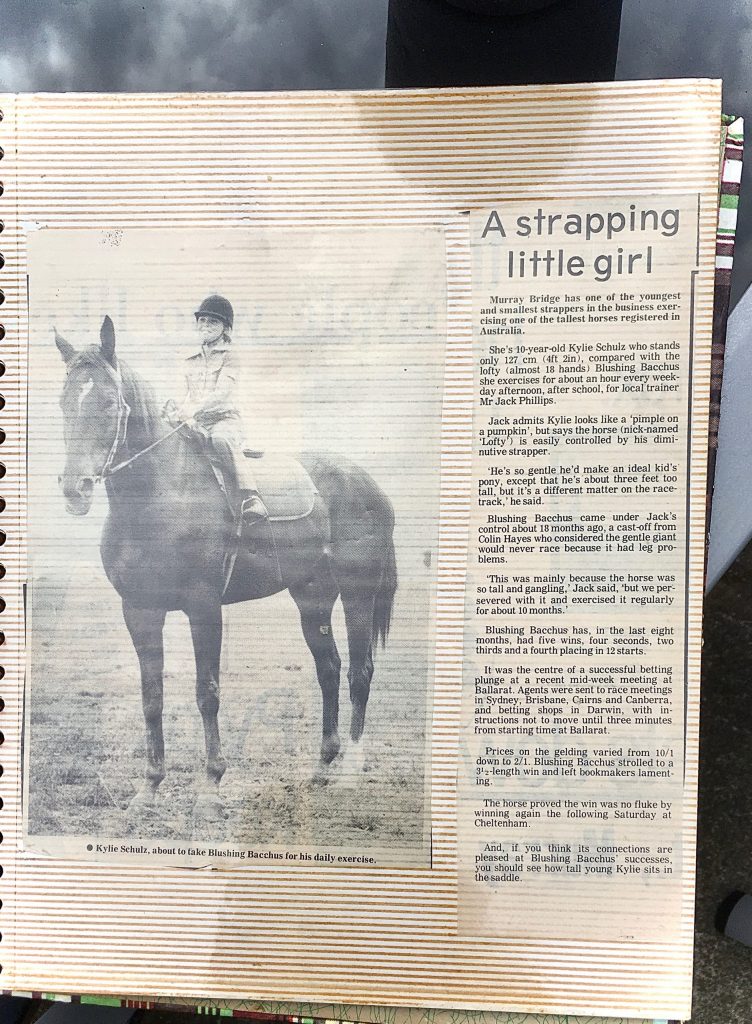 With her mother suffering ill health back in her home state of South Australia and the imminent closure of the Caulfield training centre, Shulz has decided to return home to help out and is set to call it a day on what has been a remarkable contribution to the development of hundreds of successful horses.

“I’ve had a lot of staff come through my stable over the years and Kylie is one at the very top end,” said trainer Mick Price.

“She is a fantastic rider, she loves the horses, and her knowledge on interpreting a horse and communicating that to me has been invaluable. She is an expert. Everyone here is going to miss our Possum.”

It’s a big move for Shulz whose life has centered around stable life for so long, but riding up to 12 horses every morning for decades has taken its toll on her body and all the aches and pains she feels when she wakes up each day at 3am have ultimately influenced the tough decision.

“My body is telling me I shouldn’t be doing it anymore. I’ve been to the chiropractor a lot lately with shoulders out, elbows out and discs out in my back,” explains Shulz.

So what makes all the wear and tear worthwhile?

“It’s the love for the horse,” she said.

Her passion for the animal was ignited more than 40 years ago when a school friend introduced her to horses.

“When I first started and wanted to work in stables I was still at school so I would go in before and after. My boss then said I had good hands and told me I would make a good track rider.”

Back then there were no industry-run training programs for aspiring track riders or jockeys like there are today.

“I taught myself, but when you rode with jockeys, they would always help you out a little bit and give you tips on what to do.”

Schulz has developed a real knack for riding racehorses which has earned her adulation from some of the most hardened horsemen including Mick Nolan who was foreman for Mick Price.

“I remember a time when Samaready was not in my barn and Mick said why is Kylie Shulz riding this filly and Mick (Nolan) said ‘you want to win the Blue Diamond don’t you? That’s how much faith he had in me.”

Shulz has played a big hand in the stable’s two Blue Diamond wins and has a real soft spot for Extreme Choice, who she labels as her favourite horse.

“It all started when Mick sent me away with him. I took him to Sydney for his first start ever. I was like his mum to him and when he came out and won the Inglis Nursery I said he’s mine and nobody else is allowed to ride him.

“He was a lovely quiet colt. He would follow me around and was so easy to do everything with and beautiful to ride as well. I’m so proud of what he’s gone on to do as a stallion.”

Extreme Choice was one of many horses Price entrusted her to campaign interstate.

“He’s put a lot of faith in me. Some are worth a lot of money and he leaves me alone and rings me every now and again to tell me what to do with the gallops but other than that I never hear from him. I know what he wants and how he wants to train them.”

A reliable travelling track rider and strapper is vitally important to any training operation but gifted people like Schulz are hard to find.

“People give me a wrap and say you do a good job and I say, well, I should be able to do it by now I have had plenty of experience,” she said with a laugh.

Later this month the Price and Kent Jnr team will close their barn doors at Caulfield and make the move to Cranbourne and Schulz’s journey with them will come to an end.

Last week the stable tweeted an emotional tribute to her as she sat aboard last Saturday’s Golden Eagle (1500m) winner I’m Thunderstruck (Shocking) one morning at Caulfield. She has ridden all of his track work this campaign.

It read: “It’s a team effort to keep a stable running and here is one of our key members for over the last 12 years, Kylie Schulz. She’s ridden some of our best horses and sadly won’t be moving to Cranbourne. Here she is with I’m Thunderstruck after his last gallop at Caulfield on Saturday.”

She leaves with a heavy heart.

“Mick has been great. He’s been so good to me since I have been there with the trust he has in me. I have nothing but praise for him and the way he trains his horses and the way he trains and how he’s so straight down the line with owners. If their horse is no good he will let them know that.

“I would not have had the success I have had without him. I have been very lucky for the past 11 years to be part of that stable.”

Shulz is now thinking she might one day take out her owner-trainer license and tinker around with a few of her own when she returns to South Australia.

One thing’s for sure, she’s certainly got the grounding to make a real go of it after having had some very good teachers along the way, humans, and horses.