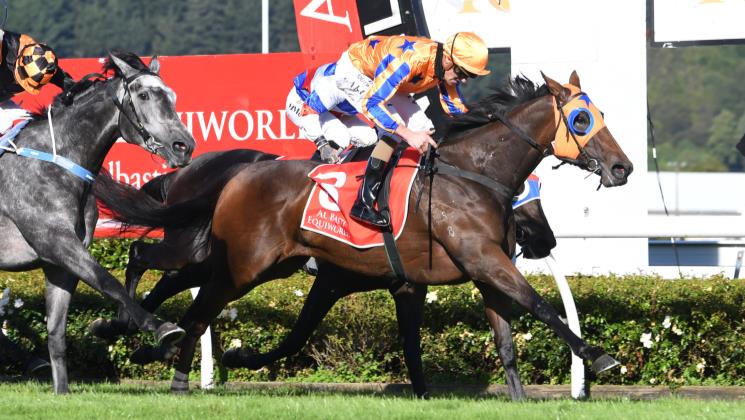 Two stallions, the late Tavistock (Montjeu) and the late Burgundy (Redoute’s Choice), refuse to be forgotten.

Both lost their lives within a matter of weeks. Tavistock’s death was initially caused by a freak accident, which later developed into laminitis. Burgundy lost his battle against the same condition.

Their last foals are finding their way through this year’s round of yearling sales but previous crops of each have been making especially loud noises recently.

In Tavistock’s case, his Asterix was supreme in the New Zealand Derby (Gr 1, 2400m). Dropping back to second last when they settled and last with a lap to run, he passed one down the back straight and another at the 1000m, then went four deep to be wide but midfield past the 600m.

Rounding into the straight five deep but handy enough, he kept improving to be one of four to co-lead at the 300 metres. At the 200 metres he took over, had two lengths to spare at the 100 metres then held off the favourite, La Crique (Vadamos) over the final 50 metres by a length and a half.

This was a huge run as the Derby was only his fourth race day appearance although he did impress when winning his maiden over 2100 metres 17 days earlier.

To rub salt into the wound, Tavistock sired a Group 3 stakes treble the very next Saturday (March 12) with a back-to-back double at Flemington (Ruthless Dame and Flying Mascot) plus Stockman at Rosehill.

At the recent Karaka sales, Kiwi Chronicles spoke with prominent agent Bruce Perry about Asterix. “As for Asterix, Sam (Kelt) simply said he wanted a Derby horse. In the past, I have found the Tavistocks a little hard to gauge as they change so much from yearlings to two-year-olds. I had almost given up on them but Asterix just stood out.”

Former Cambridge Stud barn mate of Tavistock, Burgundy, is making a statement of his own, his Belle En Rouge outstaying the favourite Self Obsession (Shocking) in tenacious style in Saturday’s New Zealand Oaks (Gr 1, 2400m).

A back-to-back Group winner in December followed by two perhaps unlucky efforts since, she proved tough to claim her fourth win in ten starts and deserves her Group 1 as well as a share of the New Zealand Bloodstock Filly of the Year title.

She was a handy fifth with a circuit to run, lost a couple of places starting the back straight but was in the clear. Rider Jason Laking moved her out a lane down the back to be midfield past the 1200 metres and out another lane approaching the 600m. Although five wide rounding into the straight, she was travelling well. They were five across the track at the 400 metres, she shared third at the 300 metres, took over inside the 200 metres, grabbed a half length lead at the 100 metres before holding on really well for the win over her favoured stablemate.

As of this week, coincidentally, Tavistock and Burgundy sit second and third respectively on the New Zealand Sires’ earnings list.

Belle En Rouge is Burgundy’s first Group 1 winner and probably the best of his progeny to date. However, Burgundy also has the outstanding juvenile talent Maven Belle whose form reads fours starts, two Group victories, including the Matamata Breeders’ Stakes (Gr 2, 1200m), and was a close third behind Lickety Split (Turn Me Loose) and Dynastic (Almanzor) in the Sistema Stakes (Gr 1, 1200m) at Ellerslie a week ago.

Why buy when you can breed?

Karaka buyer supremo David Ellis described Burgundy as: “The fastest horse ever trained at Te Akau.” Yet here he is siring, not only an Oaks winner but also a winner over 3200 metres (Mondorani).

In two seasons (he did not race at two) Burgundy scored seven wins and three third placings in only 12 starts. Although he won at 1600 metres, four of his wins were at 1200 metres with a further two coming at 1400 metres. Five were in stakes races and one of his placings was when running third behind the champion mare Final Touch (Kashani) in the 2013 Telegraph Handicap (Gr 1, 1200m).

Ellis supported the stallion once he was retired to Cambridge Stud and, with his wife, syndicator queen Karen, they have enjoyed considerable success as breeders, with both Belle En Rouge and Maven Belle being home-breds from the Te Akau breeding arm of the empire.

Because the two fillies were never put through the Karaka ring, neither are eligible for the rich Karaka Millions races for two and three-year-olds.

There is some staying ability within Burgundy’s female line. His dam, Grand Echezeaux is by Zabeel (Sir Tristram), making her a three-quarter sister to Romanee Conti (Sir Tristram), the dam of the Melbourne Cup (Gr 1, 3200m) and Caulfield Cup (Gr 1, 2400m) heroine Ethereal (Rhythm).

Grand Echezeaux’s half sister, La Tache (Danzatore), is the third dam of South Australian Derby (Gr 1, 2500m) winner Howard Be Thy Name, a son of Redoute’s Choice, as is Burgundy.

As for Belle En Rouge’s family, her dam, Cavendish Belle (Thorn Park) never raced. Damsire Thorn Park (Spinning World) was brilliant, especially at 1400 metres, recording a slashing 1:21.3 when taking out the Stradbroke Handicap (Gr 1, 1400m), one of his nine wins at up to 1500 metres.

Laminitis would also claim the life of Thorn Park who stood only seven seasons at Windsor Park Stud but which included New Zealand Derby (Gr 1, 2400m) winner Jimmy Choux, one of his 29 stakes winners.

In the space of 21 days (since February 26) he has taken his tally of stakes winners from one to five and is proving to be a revelation among New Zealand’s up–and–coming sires.

His oldest progeny are just three and this excellent spell kicked off with Alabama Gold’s three and three-quarter length win in the Matamata Slipper (Gr 3, 1200m) followed by the unbeaten two-year-old filly Lickety Split, who grittily fought back when headed by boom horse Dynastic (Almanzor) in the Sistema Stakes (Gr 1, 1200m) a week ago.

Lickety Split showed exactly the same determination, recovering the lead when headed, in her winning debut at Ellerslie on Avondale Guineas day.

Turn Me Loose’s training duo of Murray Baker and Andrew Forsman threw out a hint as early as last May when their Turn The Ace scored at Listed level at Te Rapa. They stated that they had several by Turn Me Loose in their care and believed that the sire had plenty of potential. Lickety Split is proof.

Fight was the hallmark of Turn Me Loose himself. His pluck was evident in the hotbed of Melbourne racing with his great successes in Flemington’s Emirates Stakes (Gr 1, 1600m) as well as the time-honoured Caulfield Futurity (Gr 1, 1400m).

At Flemington he led practically all the way, but was so tough, whereas at Caulfield he took a sit in third and didn’t lead until the 200 metres, yet was simply too strong.

Those victories were achieved in the spring and autumn of his four-year-old career but we shouldn’t forget his super win in the New Zealand Two Thousand Guineas (Gr 1, 1600m) either. That day he sat second to the top of the straight but when unleashed, cleared out for a big win.

Australian form gets the attention of Aussie buyers and two of Turn Me Loose’s first crop made a big impression last week. On Adelaide Cup day in the Morphettville Guineas (Listed, 1600m), his Ancient Girl showed she has inherited her sire’s tenaciousness by fighting for the early lead, carting them along to the top of the straight before careering away impressively, taking her record to three wins in six starts.

Four days later at the Moonee Valley night meeting, Prix De Turn bagged the rich Alister Clark Stakes (Gr 2, 2040m) in style despite being shuffled back on the fence from the 1000 metres. Determined, he strode forward from the 600 metres and took over the lead, four deep, before they straightened. At the 200 metres he kicked again and went to the line comfortably by more than a length.

Prix De Turn’s young trainer Matthew Brown secured the colt at the 2020 Inglis Ready 2 Race auction for $47,500. The colt had failed to reach his reserve earlier that year at Karaka.

Brown must have been impressed early on as he purchased Prix De Turn’s year younger sister for $80,000 at Karaka just months later.

The task of establishing several young sires takes time and patience so it is heartening to see Windsor Park Stud’s return to the limelight. Turn Me Loose is the real deal and is fast becoming a player in the Iffraaj (Zafonic) legacy. The great sire lives on but no longer shuttles to his southern hemisphere home of Haunui Farm.

Further sons of Iffraaj (Zafonic) at stud in New Zealand are the tough Jon Snow and the resilient Wyndspelle, both Group 1 winners. His blood has earned a good measure of respect in these parts.

What will the stallion swoopers do?

This year their plans have been somewhat thwarted after an explosive victory by the filly Fireburn (Rebel Dane) in Saturday’s championship for the juveniles.

She was carted back to near last at the 600 metres and her chances looked hopeless, however, Brenton Avdulla kept his cool and drove her along the fence, hoping for a clear run in the straight. From the 400 metres to the 300 metres she gained quickly, found a lane one off the fence at the 200 metres, then pounced on the leaders. Her momentum had her co-leading at the 100 metres after which she booted clear by two and half lengths.

The filly tasted defeat on debut but has since added four successive wins. Apart from the heavy track there were few excuses for the chasers. She had to be good and proved it.

The fourth filly in the last six years to land the rich Group 1, Fireburn has therefore caused the attention to instead be focused on her sire, Rebel Dane (California Dane).

Rebel Dane was a true warrior on the track and remained sound through six seasons incorporating 40 starts.

At stud he was shunned, attracting just 67 mares in his first two seasons. Those numbers look good against his next two seasons as only 25 mares in total were to visit in 2019 and 2020 before a recovery of sorts to 49 last spring, as a result of a Group 3 winner, Subterranean, from his first crop.

Only 14 of his two crops of racing age have been to the races. Fireburn is his only runner from his second crop. Six have won including Listed placed Lloyd’s Crown and the Sydney winner Rebel Shadow.

Fireburn is the only foal of her dam, Mull Over (So You Think), to race. Mull Over, a $22,000 purchase by Fireburn’s breeders as a racing/breeding proposition at the 2018 Magic Millions National Broodmare Sale, is a half-sister to the dual Listed winner Galizani (Galileo).

Fireburn’s third dam, Vaguely Modest (Vaguely Noble), was a Listed winner in Canada, she herself a half-sister to champion Irish Two-Year-Old Danzatore (Northern Dancer), who shuttled to Cambridge Stud during the late 1980s.