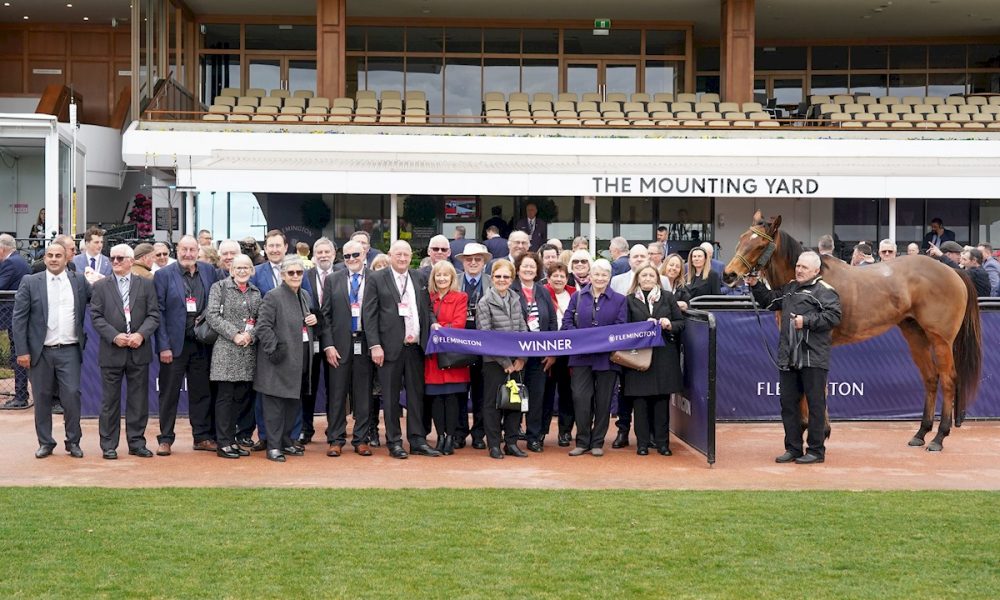 The best laid plans always start with a few beers.

Well, maybe not, but inspiration drawn from some stubbies with his boss all of ten years ago enticed Dennis Lewis into the world of racehorse ownership with Darren Dance’s Australian Thoroughbred Bloodstock and from there he’s had the ride of his life.

“It was a Thursday afternoon and the boss and I were at work and I said to him ‘I’d like to get involved in a horse’, to which he replied, ‘so would I’,” recalls Lewis, an operations manager for a mining company from Geelong.

“We were having a couple of beers and jumped online and saw this horse available with Australian Thoroughbred Bloodstock.

“My wife went off the headboard, but the horse was actually racing on the Sunday and it won just 48 hours after I purchased it.”

That horse was Testa Rossa (Perugino) mare Royal Fantasy, who won four from 21 starts to modest Benchmark 64 company, but it had Lewis coming back for more.

Good thing, too, as the 64-year-old’s endeavours in racing ownership is now headlined by the evergreen sprinter Sirius Suspect (Wanted), winner of Saturday’s Aurie’s Star Handicap (Gr 3, 1200m) down the Flemington straight, his third success at stakes level.

Lewis is the proud owner of one per cent of the eight-year-old and forms part of the Unwanted Mob syndicate within the ownership of the horse, himself bred by Dance and a group of owners who raced the dam, Sirius Miss (Galileo).

“We’re the Unwanted Mob because, effectively, Sirius Suspect was unwanted by the market, as I understand it,” Lewis said of the son of Wanted (Fastnet Rock).

“To think we’ve got this far, if he wins one more race he’s got $1 million. Both my wife and I were there at Flemington and it’s a huge thrill to win at Flemington.

“I’ll never forget January 1, last year. Sirius Suspect won his first Group 3 in the Standish and two races later we had Hasseltoff also win at Flemington. A double at Flemington – days don’t get much better than that.”

Racing has become somewhat of a lucrative commercial behemoth for many participants in the industry, but far from chasing the next stallion prospect or blueblooded Group 1-winning filly, Lewis is there to savour every experience that comes his way.

“I was only interested in getting involved in a horse, I didn’t really care if it only won a maiden at Terang.

“I’ve always had an interest in sport, not racing so much, other than to watch and the odd punt on the Melbourne Cup, but [racehorse ownership] was always something I was interested in and getting a photo on the wall in the pool room. Now I need a bigger wall!”

The owner of four horses, by his own admission Lewis ‘doesn’t know one end of a horse from another’, but his interest in the game has grown and as part of his racehorse armoury is a filly by ‘the champion’ Frankel (Galileo), named Frankly Rosie, a four-year-old with Liam Howley.

“The race I’d really like to own the winner of? The next one. But the Cox Plate and Melbourne Cup would be ideal, that’s daring to dream,” Lewis said.

“But just the fact I can go to Flemington and be involved as an owner, whether I own one per cent, fifty per cent or 100 per cent, and we’re all treated the same and we can all experience the thrill of racing ownership, that’s what it’s all about, for me.”