Six Of The Best 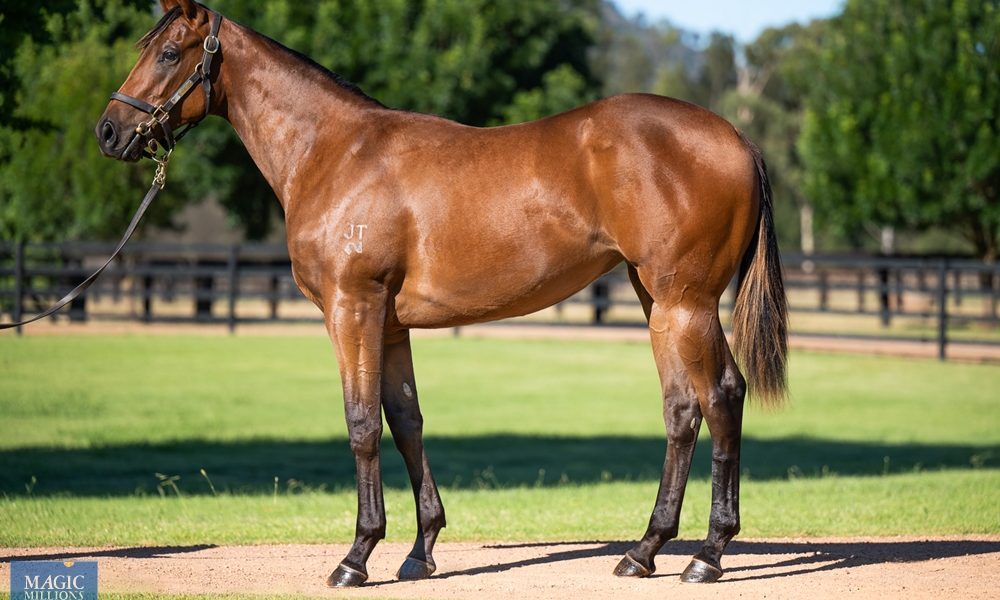 In no particular order, here’s a look at a super six likely head-turners at next week’s Magic Millions sale.

Her sister, Sunlight, won three Group 1s and fetched $4.2 million as a broodmare. Her brother topped last year’s Inglis Easter sale at $3 million. Strap yourselves in for a thrilling bidding duel when this filly enters the ring.

The Widden Stud showstopper is the fifth of six full siblings, by the famous farm’s flag bearing sire out of the dual Group 3-winning Solar Charged (Charge Forward), a family not only highlighted by Sunlight, but which also includes Melbourne Group 3– and Listed–winning mare Sisstar.

While the $3m brother – Kandinsky Abstract – is now a two-year-old awaiting his first start for the Coolmore-Chris Waller combination, this filly, the ninth of her dam all told, could be the pick of the bunch.

“She a superstar,” says Widden’s Antony Thompson. “I’d say she’d be the best filly in the sale. She’s very similar to Sunlight, and she’s got an awesome presence about her.

“Strength, attitude, the way she moves – she’s just a bit special. She’s taken the breath away from early inspections right through to every time she’s come out of the box at the sales.

“And her temperament is great. She does have a bit of sass about her. You’d probably ask her what you’d like her to do, and ask her politely – you wouldn’t try to tell her what to do – but you like seeing a bit of that in your horses. She’s certainly the dominant filly in the paddock.”

Widden purchased Solar Charged, with partners Qatar Bloodstock and Telemon Thoroughbreds’ Dan Fletcher, for $650,000 at the 2014 MM Broodmare Sale. It turned out to be one of those times in the inexact science of breeding when a calculated gamble bears the fruit expected.

“She’s married to Zoustar, really,” says Thompson. “We set out to buy what I though was the perfect mare for him. She cost us a good bit of money, but as a mating and as a physical she was the ideal mare.

“Some stallions take you a while to figure out. Others, you think you’re going to get something, and you get it. In this case, Solar Charged looked the ideal mare and she’s turned out to be exactly that.”

Meanwhile, the first result of that mating, Sunlight, also has her first offering at the sale in Lot 445, a chestnut colt by Coolmore’s Justify (Scat Daddy).

The first yearlings by Darley Victoria shuttler Blue Point (Shamardal) – the only horse to have won three Group 1 sprints at Royal Ascot – are set to draw considerable interest at the Australian sales. None more so than this colt from the Segenhoe Stud draft, a half-brother to new West Australian sensation Amelia’s Jewel (Siyouni).

The Listed-placed Bumbasina (Canford Cliffs), was purchased in Britain for Western Australia breeder Peter Walsh after he’d seen French sire Siyouni in the flesh and had his breath taken away. The result, after Bumbasina transferred to Segenhoe in-foal, is Amelia’s Jewel, who won her sixth out of seven last month in her first Group 1 attempt in Ascot’s Northerly Stakes (Gr 1, 1800m).

Looking for matings for Bumbasina in Australia, Walsh, his Amelia Park team and his Segenhoe advisors, opted to try Blue Point in his first season here, and now here we have this head-turning colt.

“The mare is very much a European type in physique,” says Segenhoe’s Peter O’Brien. “She needs a very strong, robust stallion. With the Amelia Park team we went through all the matings, and we arrived at Blue Point. He’s a stallion who’s laid out to work well down here. The (Shamardal) sireline has worked here, and he was just a brilliantly fast horse who performed from two years to five.

“We have four Blue Points on the farm and they all have lovely minds. And this colt, we couldn’t be happier with.

“We had Amelia’s Jewel on the farm, and she was a different type of model – a chunky, short-coupled type. This colt has a lot more size and scope, and a much better action. Amelia’s Jewel didn’t have much of an action at all when she walked, which could be a Siyouni thing. But this colt, from the day he was born, was always a standout.

“His forte is in action – he’s just such a beautiful, loose mover. He’s got a huge overstep, beautiful width through the hocks, he points his toes like a ballerina and just does everything you want. He barely touches the ground.

“I’d say he’d be a post-Christmas two-year-old, not an obvious pre-Christmas type, and whatever he does at two, he’ll be much better at three.”

This filly is sure to cause immense interest. It’s rare to find yearling close relatives of Europeans who’ve starred on the Australian turf, but this offering from Arrowfield is a half–sister to Godolphin’s much-loved Group 1 hero Hartnell (Authorized).

Debonnaire, a dual winner up to 1600m by Anabaa (Danzig), threw Hartnell in Britain as her second foal. A £45,000 yearling bought by Mark Johnston, the white-faced gelding became one of the finest imports Australia has seen, winning four Group 1s and placing in no fewer than 13 others, in a career which would have brought far more if not for a contemporary named Winx (Street Cry) beating him into second on four occasions.

Debonnaire was imported to the US in 2016 by her owners, the Goodman family of Kentucky’s Mt Brilliant Farm, and after four more foals she was shipped to their long-term associates, Arrowfield Stud, before a 2020 cover by Zoustar.

The result is this filly, described by Arrowfield bloodstock manager Jon Freyer as “a cracking sort”. She has hints of at least one very strong cross, with Zoustar’s short-lived sire Northern Meteor (Encosta De Lago) having gelled successfully, through his mere four seasons at stud, with Danzig’s (Northern Dancer) most famous son Danehill (12 winners from 17 runners).

And while Hartnell is Debonnaire’s stand-out offspring, she also left his older half-sister Roz (Teofilo), a British Listed winner and Group 1 runner-up, and the talented US mare Ursula (Tapit), twice stakes-placed in a career cut short by injury.

“She’s probably not in that Hartnell mould in that she’s a big strong filly with great depth to her,” Freyer says of Lot 778. “She’s going to finish up a big filly. She’s probably a fraction up behind at the moment, but everyone at the farm loves her.

“You’d think, being by Zoustar, she’d probably be best suited over shorter distances than Hartnell, although one of his Group 1s was over 1400 metres in the Orr Stakes. So, he had plenty of speed, but he was able to carry it over a bit of ground, which is what class is all about.

“I do think this filly will make a two-year-old. She’s very mature, and the dam, is just a beautiful, quality mare.”

Victoria’s Rosemont Stud made an extremely well-timed purchase in snaring Stylish Bel (Bel Esprit) from New Zealand trainer-breeder Donna Logan in 2017. The unraced mare – a half–sister to two Australian Listed winners – had had two foals who remain unraced, but her third was showing hints of ability.

Trained by Anthony Cummings, the son of Road To Rock had won a maiden and a Benchmark 78 in Sydney, before placings in the Hobartville Stakes (Gr 2, 1400m) and Rosehill Guineas (Gr 1, 2000m). At the time, he was called Montaigne, but he went to Hong Kong, had a name change to Beauty Generation, and became a superstar.

He won eight Group 1s, became Hong Kong’s highest stakes earner, its two-time Horse of the Year, and was joint head of the 2018 World Thoroughbred Rankings for the mile. All of this meant that when Stylish Bel arrived at Rosemont in late 2018, she was on her way to being crowned New Zealand’s Broodmare of the Year for that season.

In Australia, the 17-year-old has thrown Yeronga Songbird (I Am Invincible), a two-year-old filly who’s shown early trial promise in the Rosemont colours for Peter Moody. Next up, came the mating with Darley’s grand Exceed And Excel (Danehill), which produced this filly.

“She’s an extremely athletic, forward, precocious looking Exceed And Excel filly,” says Rosemont’s Anthony Mithen. “She’s got a very good walk on her, purposeful, and she looks sharp and bright; a chestnut filly who really fills the eye.”

With Rosemont having opted to keep Yeronga Songbird, and Stylish Bel’s 2022 filly foal by their first-season sire Hanseatic (Street Boss), Mithen says Lot 435 presents an opportunity for buyers to not only purchase a half–sister to Beauty Generation, but to tap into Exceed And Excel’s speedlines and, for residuals, his high repute as a broodmare sire.

“We’ll have two fillies from the mare, and this one presents a great chance for a buyer at the yearling level,” he said.

My Conquestadory, who won the Keeneland Alcibiades Stakes (Gr 1, 1700m), has had three foals to race, starting with Bourbon War (Tapit), a dual winner who was Group 2 placed in the US. Imported by Newgate, she was put to Russian Revolution (Snitzel) to produce Russian Conquest, the $425,000 MM purchase who was beaten only by the outstanding Coolangatta (Written Tycoon) in last year’s MM 2YO Classic.

“We liked Russian Conquest as a foal, so we bred the mare to Russian Revolution’s sire Snitzel on the basis she’d have a three-quarter relation,” says Newgate’s Henry Field.

“This filly is probably a bigger and more attractive version of her sister, who’s obviously a very high–class filly.

“She’s got real athleticism, beautiful balance – she’s as good a Snitzel filly as we’ve bred on the farm, if not the best. She’s all class, purely put together, a quality, medium-sized, really nice filly.

“Russian Conquest has been one of the best of her generation. She was the highest-priced Russian Revolution of her year, so that speaks to how impressive this filly is.”

B c, I Am Invincible-Spright

Spright (Hinchinbrook) is a mare who lit up Australian racetracks, winning five black-type sprints headed by the Robert Sangster Stakes (Gr 1, 1200m) in 2019. As a broodmare, the nine-year-old appears to be stepping out just as boldly.

Her first foal, a colt by Zoustar, was destined for last year’s Easter sale – with breeders Cressfield holding high expectations for seven figures – before a series of minor issues led to his withdrawal.

Second time around, Spright went to I Am invincible, and the outcome is what Cressfield general manager Wayne Bedggood describes as this “beautiful, strong” bay colt, who carries one of Vinnie’s most successful nicks, that through Hinchinbrook’s sire Fastnet Rock (Danehill) – 26 winners, 2 stakes winners, 35 runners.

“Spright’s had three foals now and they’ve all been good types,” Bedggood says of the mare who has an I Am Invincible filly at foot, and is back in foal to the Yarraman titan.

“We considered going back to Zoustar because the first colt was such a stand-out. It’s a shame he had to be withdrawn from sale, because he would’ve been well over the million dollar mark for our money. He’s just come back from pre-training and we’ll race him in partnership.

“But the match-up of Spright with Vinnie goes very well on physicals, and this colt is a little bit bigger than the first one, and he’s got great strength.

“The I Am Invincibles are generally good types, and he typifies the breed. He’s got a great attitude, and just his overall strength is what grabs you. He’s very hard to fault.”

The colt is one of two Cressfield offerings from Group 1 winners. Lot 288 is a filly by All Too Hard who’s the final foal of the now retired dual top-level victor Regimental Gal (General Nediym), winner of the Magic Millions 2YO Classic in 2003.