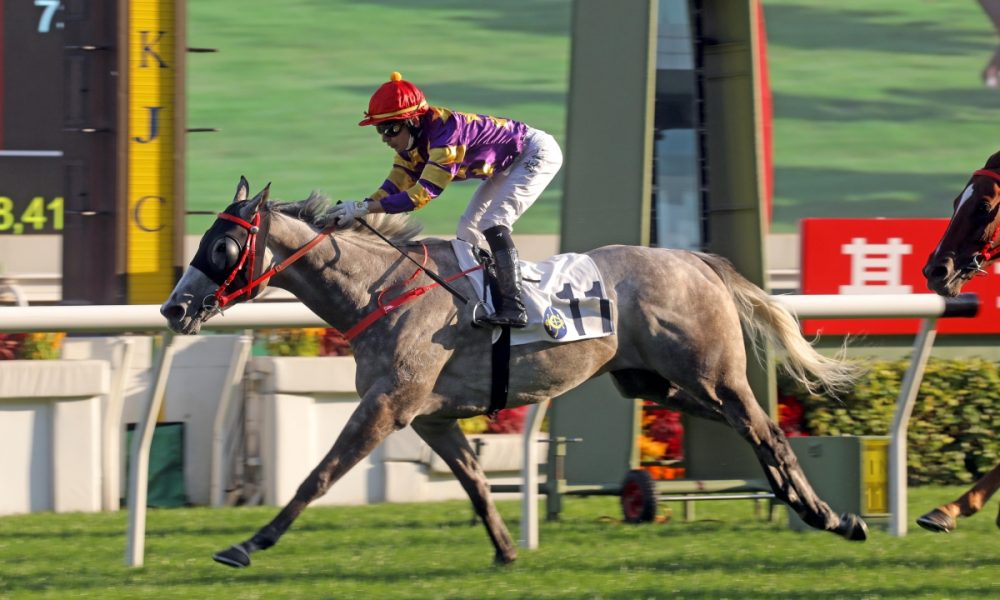 Given a seamless run by Borges, Silver Express had a length and a quarter to spare from Excellent Proposal, but Joao Moreira was convinced Excellent Proposal should have probably won the race after failing to obtain a run between Buddies (So You Think) and Kings Shield (Scat Daddy) in the straight.

“On the top of the straight I was calling for a run and I end up getting checked but the horse’s performance itself was outstanding because, even having to go back, he dashes home to run a very good second, so I was happy with that,” said Moreira, who finished the meeting with a treble.

Size will press ahead to the Hong Kong Mile with Excellent Proposal and Lucky Express (Toronado), who finished sixth, but has more modest plans for Silver Express, who joins former Size charges Electronic Unicorn (Housebuster), Danacourt (Danasinga) and Fulfil A Wish (Commands) as a Chevalier Cup victor.

“Well, he hasn’t got the handicap for it (Hong Kong International Races) really and I’m not too concerned about that, I can find another race for him,” Size said of Silver Express before confirming Excellent Proposal and Lucky Express would remain on course for a clash with Golden Sixty (Medaglia D’Oro) in two weeks.

“At first watch, it looked like Excellent Proposal was unlucky and then I’ll see how the other one (Lucky Express) is,” he said.

Butterfield (Setembro Chove), who will contest the Hong Kong Vase (Gr 1, 2400m) on December 12, was strong under Blake Shinn to narrowly miss second place behind Excellent Proposal for Danny Shum.

Borges, 28, has forged a fruitful partnership this season with Size, notching multiple victories with Sight Success (Magnus) but the victory with Silver Express is clearly the Brazilian’s most significant achievement for the 11-time champion trainer.

“I’m grateful to be in Hong Kong and I feel very fortunate to win a race such as this. The horse ran very well.”

Size improved his season’s tally to 15 after the impressive wins of Sight Spirit (Toronado) and Blaze Warrior (Sebring), both for Moreira.

Moreira said: “He’s a young horse who, we thought by now, would have won his races and he had been giving us some disappointment, but today wasn’t that day.

“What we expected him to do in his first few runs in Hong Kong, he’s done it today. His trials had been outstanding but he hadn’t been able to produce it until today. The way he won makes me think there are more wins to come.”

The four-time champion jockey was also taken with the performance of Blaze Warrior in the Class 2 Chevalier Property Investment Handicap (1400m).

“Once again, he proved to be a classy horse, winning very impressively, so I think what he’s done so far gets him a credit to be considered for the Four-Year-Old Classic Series. He’s a nice horse with a bright future.”

Moreira now trails Zac Purton 42-33 in the jockeys’ championship after the Australian posted a double.

Purton combined with Me Tsui to snare the Class 4 Chevalier Aluminium Engineering Handicap (1000m) with Sparkling Dolphin (Exceed And Excel). The win marked Tsui’s sixth success of the campaign.

Purton’s domination continued in the following race when Light Of Wanshi (Ocean Park) proved too strong while claiming the Class 4 Chevalier Car Dealership Handicap (1600m) for Chris So.

“It was a good win, he’s been knocking on the door for a while actually. He’s a horse that closes really well, so the fact the pace was so quick in front gave me something to aim at and he was always going to catch the lead horse,” Bentley said, pocketing his fourth winner of the season.

“It’s been a while so this win is very much welcomed. So, hopefully I can get on a bit of a roll and it’s good to get a winner for Frankie.”

A wide barrier proved no obstacle for Brave Power, who motored late under Ho to clinch the Chevalier E & M Engineering Handicap (1400m). It was the gelding’s first triumph in 17 attempts.

“Brave Power, if he’s trapped between horses, he doesn’t accelerate. He’s got to be wide and you have to wind him up. Once he comes into the straight, he must see daylight and Vincent got it perfectly this way and that’s why he could finish this way,” Cruz said.

“If you are stuck in between horses and you try to make a move, he won’t accelerate. He’s got a big slow action.”

“Vincent rode a perfect race on him, too. He waited long enough to press the button. He rode the perfect race, Vincent Ho – I’m very happy about that,” Cruz said.