Sky’s the limit for outstanding Aegon 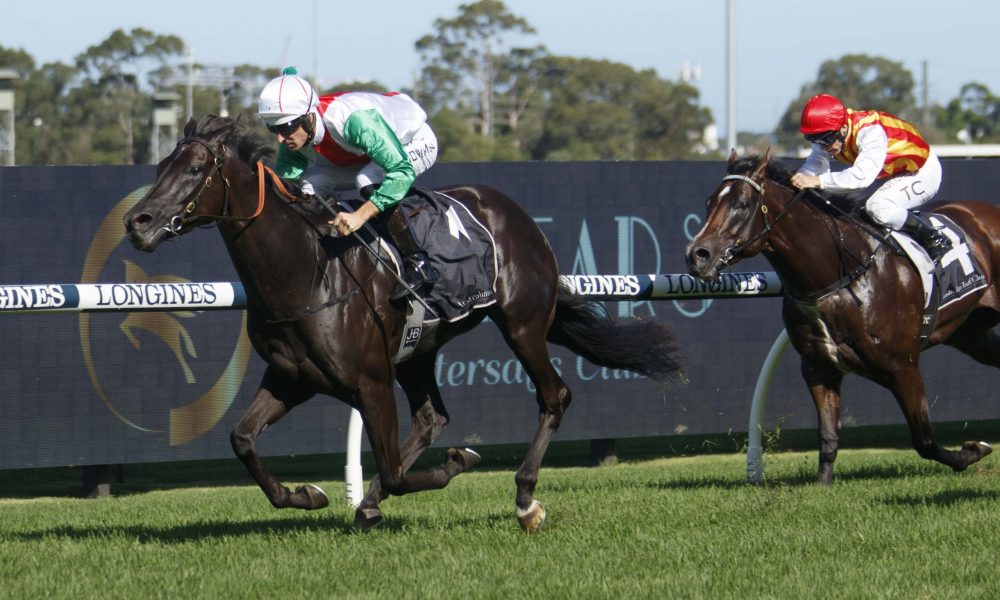 New Zealanders made their presence felt across the Tasman on Saturday with the superb winning performance by Probabeel (Savabeel) the Futurity Stakes (Gr 1, 1400m) while most impressively, the star of Aegon (Sacred Falls) is rapidly ascending and his Australian debut in the Hobartville Stakes (Gr 2, 1400m), against some of Sydney’s best three-year-olds, had commentators gasping for superlatives.

A shade slow to begin, Aegon improved along the rail to keep in touch with the pace but, rounding into the Rosehill straight, was in need of a run. Hugh Bowman looked tempted to move out at the 300 metres but that route was denied so he had to look towards the inner.

Approaching the 200 metres and now with a clear view, Aegon pounced, drove through one off the fence, took over at the 100 metres, then raced away by a length and three-quarters, Bowman sitting quietly the last 50 metres.

Post race, co-trainer and part-owner Andrew Forsman reported that Aegon had come through the race in good order. “I spoke with Bjorn (Baker) this morning and he has pulled up really well. He sent through a video,” said Forsman. “He just had a quiet canter, put a saddle on him and gave him a stretch of legs.

“That was about it really. He looks in really good order so all seems good,” said Forsman, who had one or two doubts pre race, while confirming that the horse will progress to the Randwick Guineas (Gr 1, 1600m).

“We thought he’d improved this preparation but you’re always a bit nervous about how his form might measure up and how the horse might measure up in that company. The track was a bit of a worry and how it was playing and where he would be in the run but, thankfully, his ability shone through and he did measure up.

“It’s definitely the Randwick Guineas next and no one has made any decisions until we get that race out of the way because what he does there will answer a fair few questions we’ve got, but we would like to try him over further so we’ll see what comes of that race then decide after that,” continued Forsman.

Aegon and Forsman were the subject of a call from Greg Carpenter on Sunday, raising the possibility of a start in the rich All Star Mile but Forsman responded: “I sent my message this morning (Monday) and confirmed that we won’t be going that route, just stick to our original plan. I’m sure that’s the right thing to do by the horse and keep him to his own age group for now.”

That he was third favourite would have surprised his many Kiwi admirers. His ability to finish strongly has been evident in all his previous races. When presented with a gap he charges hard and in a tight finish he knows where the winning post is.

The way he surged from the rear, then fought off a very determined Bourbonaire (Darci Brahma) in the New Zealand 2,000 Guineas (Gr 1, 1600m) last November was significant.

After an eleven-week break he showed up at Ellerslie for the Karaka Million 3YO Classic (RL, 1600m) and had to repeat that effort, this time against Te Akau’s fine filly Amarelinha (Savabeel). He gives as good as he gets, displaying real tenaciousness to keep his nose in front when it counts.

By comparison, Saturday’s Hobartville Stakes was decided well short of the post when he drove through at the 200 metres and 100 metres later he was in total control.

His style of taking his time to find his feet has worked out well so far. The competition will only become more fierce so his being able to produce when asked then fight off his opponents will be mighty handy when the heat and quality of Sydney’s racing shows its true force during the next month or two.

Jamie Richards and the Te Akau troop will no doubt be floating on air after Probabeel’s super win but could they also be cementing their plans for Amarelinha?

On her performance against Aegon in last month’s Karaka 3YO Classic she must be a solid chance to plunder some of the rich Sydney fillies’ races this autumn.

The two have bloodlines in common: Aegon is by O’Reilly’s (Last Tycoon) son Sacred Falls from a Zabeel (Sir Tristram) mare while Amarelinha is by Zabeel’s (Sir Tristram) son Savabeel from an O’Reilly mare.

Aegon’s dam, Toss Up (Zabeel), won once and has foaled four winners, two by O’Reilly and two by Sacred Falls. Her fifth foal to race, a filly by Tivaci (High Chaparral) named Single Tail, was sixth at her first start two weeks ago in Victoria.

His granddam, the stakes-placed Tale Of The Cat (Storm Cat) mare Heads Or Tails, scored wins at Ellerslie and Riccarton and claims as her half-sister the Ellerslie Sires’ Produce Stakes (Gr 1, 1200m) winner Good Faith (Straight Strike) as well as Spring (O’Reilly), the dam of Australian Oaks (Gr 1, 2400m) winner Daffodil (No Excuse Needed), one of her three Group 1 successes.

Wexford Stables’ Lance O’Sullivan and Andrew Scott have a solid grip on the New Zealand Derby, to be run on March 6, with their three-year-old colt Rocket Spade (Fastnet Rock).

Last Saturday, Craig Grylls waited until the 600 metres to move him forward, got a nice run through near the top of the straight, then pulled five-wide upon straightening. A length back at the 300 metres he gradually levelled up, took over inside the 200 metres and stayed on best to the line to win by a neck.

ANZ Bloodstock News caught up with co-trainer Andrew Scott: “Rocket Spade pulled up really well. He’s got a terrific foundation behind him and has a great constitution as well. We gave him a light workout this morning (Monday) and he has a bit of energy about him so we’re thoroughly pleased with the way he’s come through the race, both physically and mentally.

“It’s now fingers crossed that he has a good fortnight and that he stays sound. We are certainly pleased with where he is at the present time. Going by the way he pulled up he will improve with the run. He had a good blow after the race.”

When asked about the Auckland Guineas result being identical to the Avondale Guineas result, Scott added: “They are all pretty even and they are all progressing well. It (the Derby) should be a real contest. A lot of those behind him will benefit from their first run over ground.”

Former NZ-trained runners have their day

From a purely racing standpoint, New Zealand had a banner Saturday in Australia.

Sent to Chris Waller, she has now scored a further four times, all in Sydney and has earned more than $500,000 in 18 starts.

A similar story surrounds the former Graham Richardson-trained Defibrillate (Shocking), whose first three races in New Zealand resulted in two wins after which he was sent to Victoria and the stable of Patrick Payne.

Richardson kept a share in the gelding along with high profile owners, cricket legend Brendon McCullum and champion jockey Lance O’Sullivan. The six-year-old is in top form, taking out Saturday’s Mornington Cup Prelude (Listed, 2000m), his fourth win on the trot. Since his export Defibrillate has scored seven times (two stakes) from just ten Australian starts.

Although not raced in New Zealand, Tralee Rose, the daughter of the late Tavistock

(Montjeu), annihilated her 11 rivals in the Lord Reims Stakes (Gr 3, 2600m) at Morphettville, her fifth success in her last six starts. She looks to have a royal chance of adding the Adelaide Cup (Gr 2, 3200m) next month.

Her acceleration once straightened for the run home was eerily similar to the drubbing she gave her opponents in the Bagot Handicap (Listed, 2800m) at Flemington on New Year’s Day. The only difference being that at Flemington she cleared out by seven lengths, whereas at Morphettville she let the field off with a mere three-and-half-length beating.

Other Kiwi-bred Australian city winners were formerly New Zealand-raced Ellerslie winner Lord Vladivostok (Tavistock). He took out Morphettville’s Zilzie Handicap (1800m) where he has scored three times in his last four starts from the Michael Hickmott stable at Murray Bridge.

From the same stable, well-known race photographer Trish Dunell was represented by her four-year-old mare Unlaced (Niagara) in the Furphy Handicap (1600m).

Twice a winner in NZ this time last year, Unlaced ran fourth in the 2020 Lowland Stakes (Gr 3, 2100m) and this victory marked her first in town, taking her record in South Australia to three starts for two wins.

Meanwhile, at Eagle Farm, Romakash (Roc de Cambes) added his second victory in town for a career total of ten in the win column.

On a down note, three of the above results cannot be taken advantage of by breeders since the stallions involved are no longer with us.

Well documented is the loss of both Sacred Falls (sire of Aegon) and Tavistock (sire of Tralee Rose) in late 2019. Sacred Falls was the youngest, yet could count seven stakes horses among his progeny, including three stakes winners. With his eldest just four-year-olds, his loss is only just beginning to be realised.

With eight crops of racing age, Tavistock had established himself very strongly (26 stakes winners) and had many years of service to look forward to before his too-early demise.

The loss of these three sires has left a sizable hole in the proven category of New Zealand’s stallion ranks.