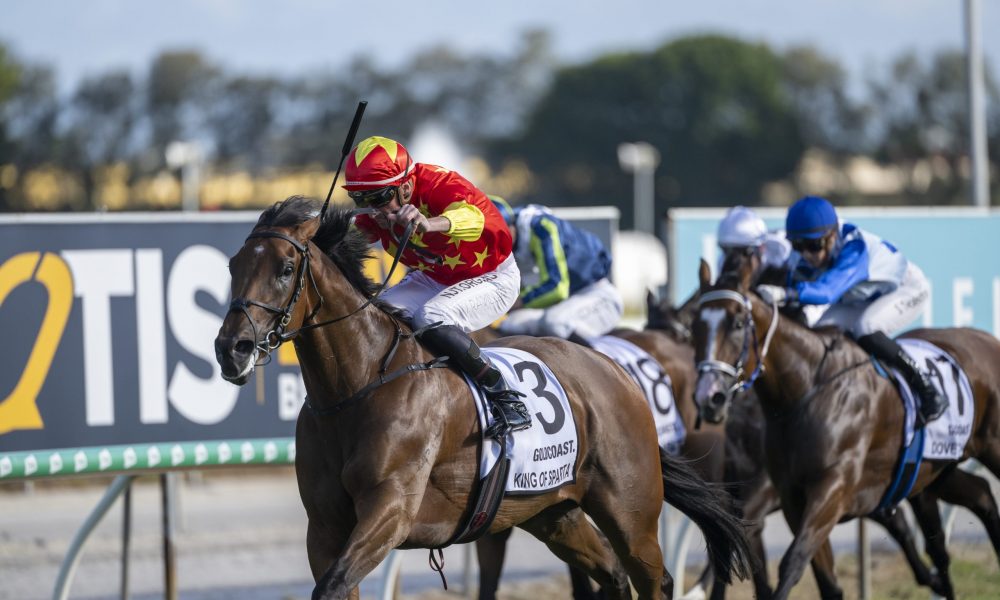 While the training partnership of Peter and Paul Snowden fell one short in the 2YO Classic (RL, 1200m) with Russian Conquest (Russian Revolution), there was adequate compensation arriving just one race later as their King Of Sparta (I Am Invincible) took out the $2 million Magic Millions 3YO Guineas (RL, 1400m).

However, victory for King Of Sparta perhaps looked unlikely through the early stages of the 1400-metre contest, as old habits resurfaced after jumping from barrier 10, with the gelding pulling furiously when he and jockey Nash Rawiller found themselves posted wide on the track.

Despite his early misdemeanours, the $4 favourite proved too classy for his 17 rivals, when in the straight he powered into the lead down the centre of the track and held off the challenge of last-start Listed winner Me Me Lagarde (Star Turn) in the silks of Magic Millions supremo Gerry Harvey, to claim a dominant length-and-a-quarter victory.

The best of the trailing pack was the Ciaron Maher and David Eustace-trained Socialist (Capitalist), who finished a further length and a half back in third.

“He’s a horse that’s always had immense talent but he always seems to do something wrong in his races and ends up being his own worst enemy,” Paul Snowden said.

“But today with Nash – it’s the first time he’s sat on the horse believe it or not – I was filling him up with plenty of instructions before the race and thankfully there was always going to be good tempo and he got into a lovely trailing spot midfield where we wanted to be.”

King Of Sparta entered into yesterday’s contest with just two wins from 11 starts, having run fourth in both the Silver Slipper (Gr 2, 1100m) and Kindergarten Stakes (Gr 3, 1100m) as a juvenile and third behind Paulele (Dawn Approach) in the Roman Consul Stakes (Gr 2, 1200m).

“We’ll get him back to Sydney tomorrow. It’s meant to be an autumn preparation but he’s ready to go now. What we do with him depends on how the races fall for him. A Brisbane winter campaign is also a possibility. But a lot of it was pushed towards today, coming off a very strong first-up run.”