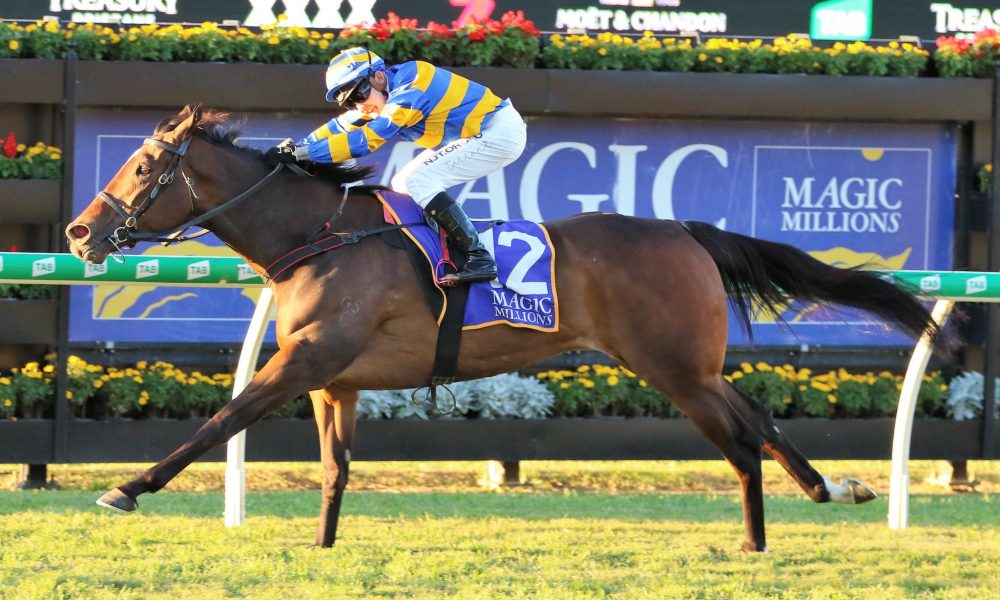 A long neck, the winning margin in Saturday’s JJ Atkins Plate (Gr 1, 1600m), may be enough to ensure that I Am Invincible (Invincible Spirit) claims his maiden Australian Sire Premiership.

The $420,000 difference between winning and second would have seen So You Think (High Chaparral) take over the top spot again. However, Sheeza Belter (Gold Standard) took the top spot ahead of So You Think’s son, Political Debate, meaning I Am Invincible retains a $300,000 lead in the Premiership with a month and a half of the season remaining.

As a Kiwi patriot, there is no doubt about this writer’s hopes and wishes but, at the same time, if any stallion deserves a premiership, it is I Am Invincible.

From 2017, he has had to contend with juggernaut and four-times champion sire Snitzel (Redoute’s Choice). He finished fourth to him that year, then second in 2018, 2019 and 2020. He would again finish second in 2021, but had to bow to Written Tycoon (Iglesia).

As Yogi Berra once said: “It ain’t over ’til it’s over,” and the fabulous non-stakes prize money on offer in metropolitan Sydney, Melbourne and Brisbane may yet come down to the wire.

Saturday’s Dane Ripper Stakes (Gr 2, 1300m), won by So You Think’s 44th stakes winner Palaisipan, saw the two stallions battling each other on the track. In second and third spots were two fillies by I Am Invincible  – Najmaty and Salateen – adding a further precious $55,000 to the sire’s total.

Very determined when running down the pacemaker, she was slow away but improved quickly along the inside to sit third in a perfect trail behind the pace. At the top of the straight she was pocketed, Craig Williams attempted an inside run near the 300m but was denied, then got a split two out at the 200m. She fought hard to get on terms, grabbed the lead then held on gamely.

Charmmebaby was an $18,000 purchase by popular agent Robert Dawe. At the time of her purchase, her dam had produced a New Zealand St Leger winner, Vikja King (Viking Ruler), yet the filly found herself in Book 3 of the 2018 NZB Karaka Yearling Sale. She was the seventh foal of her dam Lithe (Zabeel), a three-times winner and five-times placed in Sydney and Brisbane.

As Dawe often says, “There’s a story behind every horse”, and in Charmmebaby’s case, a story of being cast aside after her first four starts.

Kiwi Chronicles spoke with Dawe regarding the chequered story of Charmmebaby.

“That year I looked at every Charm Spirit in Book 1 and Book 2 and not one appealed, most lacking leg,” said Dawe. “Having been at the sale for about 12 days I was ready to head home, especially as there was heavy rain at that time, not the best for the caravan. While packing up in ankle-deep water, I said to my long-time client Bryan Black that I had found a Charm Spirit with some leg, a great looker whose dam is by Zabeel.

“So I left instructions with Bryan, thought she should make $20,000 or less and watched the sale on-line from home. The filly was passed-in, so I called Bryan and advised him to offer $18,000 and the vendor accepted.”

She trialled in New Zealand as a late two-year-old from Peter Lock’s stable and after transferring to New South Wales managed one placing and three “outs” in her first preparation at three.

Later that season, she was put up for auction, changed hands for $14,000 and for her new owner-trainer immediately broke her maiden at Taree. In the spring of her four-year-old season, she was consistent with three wins, three seconds and a fourth in seven starts, rounding out 2020 with a Class 3 victory at Rosehill.

In February of 2021, she bagged her second biggest payday in the Scone qualifier for the rich Country Championship Final (1400m) at Randwick. She would finish a solid third in the Championship.

After two further NSW country wins, including the Taree Cup (2000m) she took on additional owners, a half share worth $275,000, plus a transfer to Brisbane and the training establishment of Lawrie Mayfield-Smith.

She struck gold again taking out the Brisbane Quality Handicap (Listed, 1640m) at Doomben, then added more black type to her resume when finishing second in the Bernborough Plate (Listed, 1600m) at the same track last Boxing Day.

Two starts back with her owner-trainer, resulted in two flops, so she was again sent to Brisbane and again struck form with a second in the Spear Chief Quality (Listed, 1600m), backing up seven days later for Saturday’s win.

For Mayfield-Smith, she has raced just four times, all at Listed level, for two wins and two seconds. Maybe that’s where the mare should remain.

Original owner, Bryan Black, is, needless to say, kicking himself but that’s racing. The change of stable (twice) and a new approach was all that the mare needed – in other words, never give up.

Dawe and Black have enjoyed several highs throughout the years with Dawe purchasing Group 1 winners Carson’s Cash (Lord Ballina) and Natalie Wood (Yachtie) on Black’s behalf. Another is current season Group performer Flash Mary (El Roca), but Charmmebaby easily fits into ‘the one that got away’ category.

Even though Charm Spirit (Invincible Spirit) has sired 14 individual stakes winners he, too, has been somewhat dismissed and is now standing in France for €5,000 (approx. NZ$8,300) based at Haras du Logis St Germain Stud, near Caen, 200km north-west of Paris.

A triple Group 1 winner, Charm Spirit has sired a further 21 black-type runners for a black-type-to-runners ratio of 7.6 per cent: A solid statistic. His son, Kirwan’s Lane, was third to Charmmebaby in the Wayne Wilson.

I Am Invincible (Invincible Spirit), however, has been a revelation in Australia, despite being merely a Group 3 winner. His service fee is at a level that New Zealand stud masters can only dream about, but is also fully justified with a BT/R ratio of 15.5 per cent.

His son, dual Group 1 winner Brazen Beau, is off and running with 18 stakes winners and 11 stakes-placed runners. His BT/R ratio is 7.9 per cent, from four crops to race.

Here in New Zealand, access to the Invincible Spirit (Green Desert) line is down to two stallions, White Robe Lodge’s Ancient Spirit, a son, and Novara Park’s King Of Comedy, a grandson, being by Invincible Spirit’s super four-times Group 1 champion Kingman who is making all sorts of noise in the northern hemisphere.

Ancient Spirit was a dual Group 2 winner in Germany at three, and added two Listed races in Ireland at five.

Listed stakes winner King Of Comedy almost ran down Circus Maximus (Galileo) in a fast-finishing second in the St James’s Palace Stakes (Gr 1, 8f ) at Royal Ascot, ahead of Too Darn Hot (Dubawi) in third. Needless to say, had King Of Comedy won that day, he wouldn’t be in Cambridge and available to New Zealand breeders.

The main thing is the bloodline is here and broodmare owners still have an opportunity to incorporate the line, which is clearly working amazingly well in Australia as well as in Europe.

That’s what the writer will be hoping to sense at this week’s NZB National Weanling Sale.

The industry received some good news regarding stakes increases, with the minimum jumping to $14,000 and boosts to premier days as well as stakes and Group races.

The sad reality, however, is that stallion, mare and foal numbers continue to fall at a rate that can only be described as alarming.

As much as the prize-money increases are both welcome and overdue, some perspective was made by NZTBA president John Thompson in the association’s newsletter, stating: “Unfortunately, our stakes increases seem quite minuscule when compared with recent announcements across the Tasman. The Golden Eagle, a race restricted to four-year-olds and run over 1500 metres at Rosehill in October, will be run for $A10 million next season. This is just one of a number of proposed stakes increases for races in Victoria, New South Wales and Queensland. It is a sobering thought that we are struggling to keep up with Tasmania when it comes to racing stakes.”

A sobering thought indeed, but Thompson was not finished: “When major industry identities such as Gerry Harvey and Garry Chittick are saying our racing model isn’t working and we need to look at change to encourage new investment and greater returns for existing stakeholders, we must ask how we can improve the current structure.

“There may be further opportunity for joint ventures or sharing of resources and technology with overseas betting agencies. Our current minister of racing has shown little interest in our industry and I’m sure it is not currently high on his list of priorities.

“Australia has shown that a supportive government and a thriving racing and breeding industry can have a positive impact on the whole economy, so let’s keep reminding our leaders what can be achieved,” concluded Thompson.

For a future column, I will attend the sale and lay out the diminishing numbers, combine them with Thompson’s comments and conduct a loose survey of industry people for their ideas. There could be some interesting comments and maybe some worthwhile ideas at the same time.

As the numbers above show, the trend does not look at all healthy. What is needed to turn them around will not likely happen very quickly, but a turnaround is very much what is needed. How or why the above statistics have evolved is worth investigating from the standpoint of not repeating past errors.

Australian racing and the stakes on offer are the envy of the bloodstock world. Surely implementing what is working there is a starting point.

To end with some positive spirit, New Zealand enjoys probably the best growing conditions anywhere for young stock. Our shoestring industry seems to defy itself and results on the racetrack are way out of proportion to the small numbers we produce. We will always have great grass.

While wet and wild winter weather plays havoc with New Zealand racing, there are two bright spots on the horizon.

Royal Ascot kicks into gear, their extravaganza is always worth a few alarm sets to watch some of the best racing all year. From Australasia there is added interest in this year’s festival in the shape of the Aussie raiders Nature Strip (Nicconi), Home Affairs (I Am Invincible) and Artorius (Flying Artie).

Online auctions have become the new normal, but Friday’s NZB National Weanling Sale is of the physical variety and some potentially tasty lots are on offer.

The sale has been expanded to 130 lots with 20 supplementary lots from Valachi Downs as that operation winds down. Perennial champion sire Savabeel (Zabeel) is represented by three lots. One of them will top the sale.

It will be interesting to see the second crops of sires whose first yearlings sold well in March, including U S Navy Flag (War Front) (11), Staphanos (Deep Impact) (2) and Ace High (High Chaparral) (7).

There is likely to be considerable interest in the five lots by Waikato Stud’s new boy, Caulfield Guineas (Gr 1, 1600m) winner Super Seth (Dundeel) (5), as well as Champion Sprinter Ten Sovereigns (No Nay Never) (7) who stood just the one season in New Zealand.